This is a guest interview with my friend Joan Marie Verba about her new project on Kindle Scout. 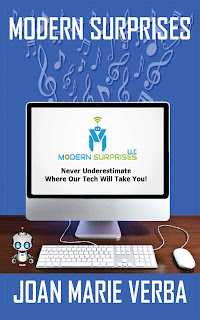 Hi Joan! How would you summarize your book, Modern Surprises?

Madeline Chang and the other women at Modern Surprises, LLC, needed someone to answer the phones. Jay Ecklund was hired. From the very first day, he found this was no ordinary company: the scientists there had secretly developed a portal that would allow them to go to anywhere on Earth. Billionaire industrialist Charles Vance found out about the portal, and was willing to lie, cheat, and steal to get it for himself. But Madeline Chang and the rest of the team were not about to let him have it.

How did you come up with the idea?

I started writing Modern Surprises after I finished my children’s chapter book (Wondry Dragon Finds a Home) and one of the members of my writing workshop said she enjoyed my writing and wished I would start another story. What I had in the beginning was the scene where Charles T. Vance threatens the Modern Surprises team in order to get them to give him Arachne, their portal. (I didn’t even come up with the company name until after I’d been writing chapters for a year.. In fact, I only had a vague idea what Arachne was.) Then I worked from that scene to build the background and first chapters, and after that, continued to the conclusion.

It turned out that the writing process paralleled the process of the development of Arachne. As I wrote, I was finding out the capabilities and limits of Arachne along with the Modern Surprises team. I definitely intended to have fun with the novel, and intended for the characters to have fun, as well--because I believe science is fun (I have a physics degree). Through the novel, I explore the fact that technology needs to be tested, that there are unexpected effects, and that technology doesn’t always work in the way the original design indicated it might (and that can be delightful). When the characters find that Arachne responds to music, it adds yet another dimension to the technology.

Then, when you have this exciting breakthrough technology, what do you do with it? Do you keep it secret, or do you make it public? And if it has a potential to be misused by those with selfish intentions, how do you keep it safe? Even more, how does technology affect your daily activities, and your interactions with others? How does it factor in with one’s ethical decisions and obligations?

I’ve summarized Modern Surprises as “scientists having fun saving the world.” It is my hope that readers will have as much fun reading it as I did writing it.

You can read the excerpt from Modern Surprises here and decide if you want to nominate it for a publishing contract with Amazon.

Posted by Kathy Sullivan at 2:00 PM