At this blog we tend to use terms like "middle grade" and "YA", with the assumption being that the readers will understand them. I've been on a number of panels lately at science fiction conventions where questions from the audience demonstrated that people don't always understand the difference between the two labels. Even what YA is has been a major source of disagreements in discussions about whether there should be a YA Hugo Award. So this post will be an attempt to break those groups down and perhaps other posters to the blog will add their points of view as well.

Short history lesson. Back when I was growing up, there was no label for YA or middle grade. You started with children's books, and then at some point you, your parent, or perhaps a librarian knew you were ready for the adult collection. "Ready" didn't always mean "emotionally mature" - it might be because that's where all the good fantasy/science fiction was shelved or it might be because you had already devoured all the books in the children's collection and your parent/librarian was tired of hand-picking books from the adult collection. (Interlibrary loan was only for adults back then.) Publishers did have some authors who wrote 'juvenile' (I do remember the Heinlein Juveniles were a thing at one point) and those would be shelved in the children's collection. Sometimes.

YA emerged as a label in the mid-70s (some will say 1950s or 1960s, but not where I was) and at that point it was thought to cover ages 10 through 18. Middle grade as an age range for books started about the time midde schools/junior highs became the fashion in the US - around the late 80s in some areas, early 1990s in others. Why and how have some classics have been relabeled as YA even though the term never existed when the book was written? It's all about the protagonist.

In panel discussions, several points have been repeated over and over. Age of the protagonist is one factor in the split between MG and YA. Middle grade has the protagonist aged between eight to twelve years old. In YA, the protagonist is older, usually thirteen and up. New Adult is a new term for the college-aged protagonist, which up to now was covered (sometimes) under YA. Classics - those books published before these terms came into use - often are relabeled YA if the protagonist fits in that age range, even if the main character is actually an adult reflecting on their childhood/young adulthood (Jane Eyre and To Kill A Mockingbird). Tamora Pierce's Circle series starts with her young mages around 10 years old. That was considered YA when the series first appeared, so her books might be considered MG by some and YA by others.

Middle grade readers have gatekeepers - parents and librarians who evaluate the books before purchase. So panelists often agree that swearing and sex is a dividing line between middle grade and young adult, no matter the age of the protagonist. Violence isn't always an issue with some gatekeepers.

Other dividing points (and there are always exceptions): middle grade covers external situations and adventures while YA is more introspective. Middle grade is more optimistic, while YA can be more edgy with uncertain endings. Middle grade focuses more on friends and family, while YA focuses on society. Before Harry Potter, middle grade books had a low word count, but that's not always true now.

Some other websites and blogs that discuss the definitions and distinctions:

How does the proposal for a Hugo for Best YA stand? There was supposedly a committee set up at the last Worldcon to look into it. There is still a Facebook group for the YA Hugo Proposal, but it's been quiet since 2014, and with the latest uproar about the 2015 Hugo nominations I'm not sure if there will even be any discussion about the topic at the business meeting at this year's Worldcon. We shall see.

What do you think are the differences between middle grade and young adult?

Posted by Kathy Sullivan at 1:00 AM 3 comments:

This month I've been busy with the A to Z Challenge and haven't a clue what to write about today. Posting every day but Sunday isn't easy. So I'm sharing interesting email with you today. Enjoy.

Exciting Days in my Corner of the World

Last month I hinted at some big writing news, but I couldn't quite share it yet. Now I can share that I am now being represented by Steven Chudney of the Chudney Agency, for a MG trilogy about a feisty princess named Fritzi. Hopefully there will be more good news for that series soon!

In the meantime the fourth book of my Ali series will be coming out this Spring. ALWAYS ALI will have Ali questioning herself and what it means to be who she is. I'm excited to share this book with the world, though it's a little sad to be wrapping up the series, Ali and her stories have been a part of my life for a long time.

And finally, in one other bit of news, my daughter has chosen a college for next year. She's going to major in Marketing with a Creative Writing minor and wants to go into some aspect of the publishing business, so I'm guessing that good publishing news will continue to happen in this family.

What good news to you have on this Tax Day?
Posted by christine M at 6:54 AM 2 comments:

Adventures can come from the unlikeliest places or reasons. And some adventures are more fun than others. This past weekend, hubby and I decided embarked on one of those.

My work place is moving to Las Colinas, which means a much more involved commute using already congested highways. (I leave at 6:30am just to avoid traffic! And even then it still gets congested! And the new location is farther and through some of the worst spots. Noooo!)

So trying to see how to avoid traffic and all the stress, annoyance, etc that goes with it, I figured I'd check out DART Rail since there's a station right by the new work address.

DART stands for the Dallas Area Rapid Transit - Texas has been slow in getting into this type of thing because Texas, unlike most states that embrace mass transit solutions, is BIG! And there tends to be lots of space between places. So between the expense and the distance, it's been slow to catch on. But Texas keeps getting more and more people, so it's become something of a necessity. There's been buses routes for many, many years, but the rail is relatively new. But both integrate into a rather large network that serves Dallas and 12 surrounding cities. So it's BIG too!

Anyway,  I spent a couple of hours doing research, finding out routes, comparing maps, and more. So Saturday, hubby and I set off to check it out and see if DART rail was a viable alternative or not. 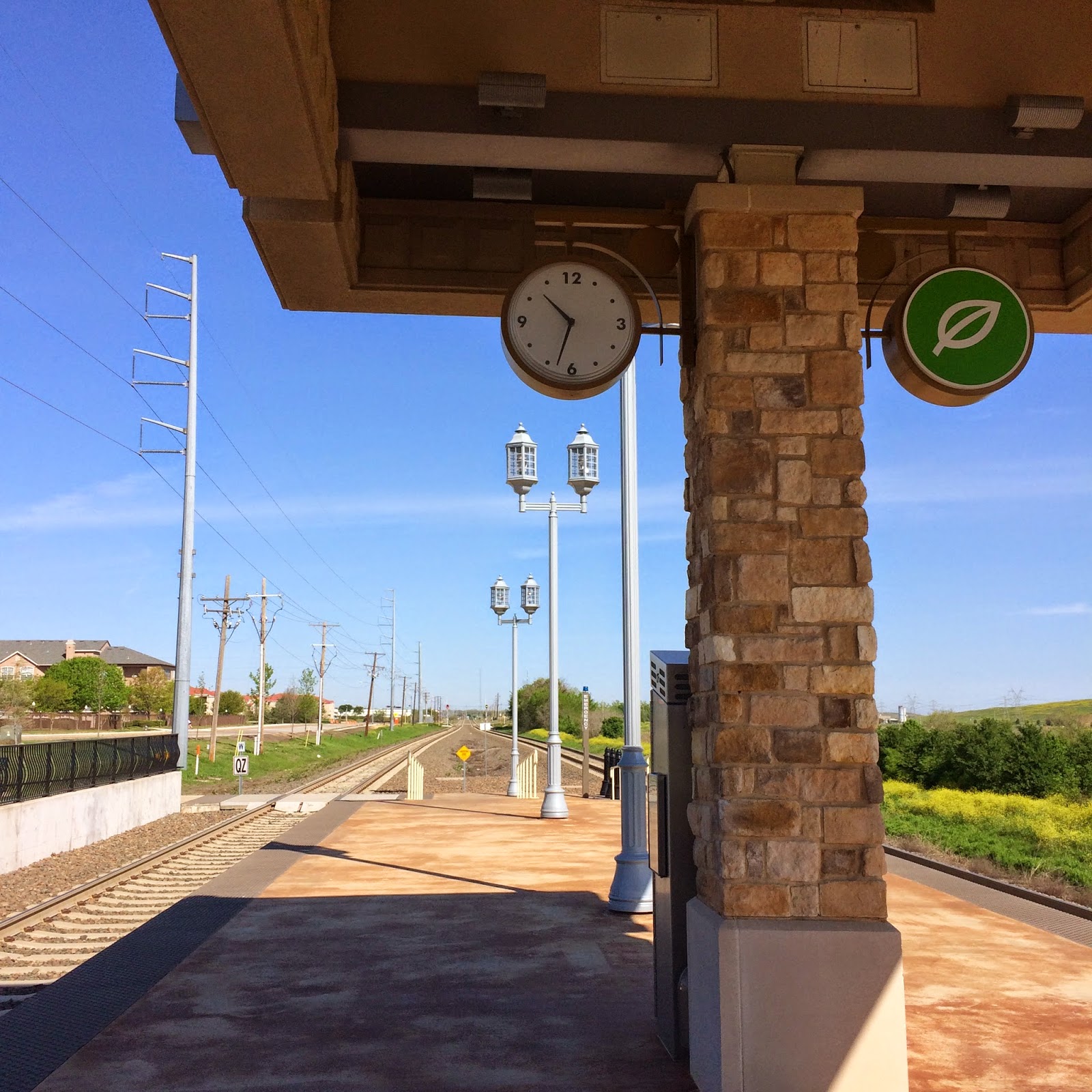 This is the view from the DCTA platform off of Hebron in North Carrollton. The A-Train stops by here on its way from Denton to the Trinity Mills station. As you can see, aside from a roof and some metal chairs and ticket machines, there's nothing here. 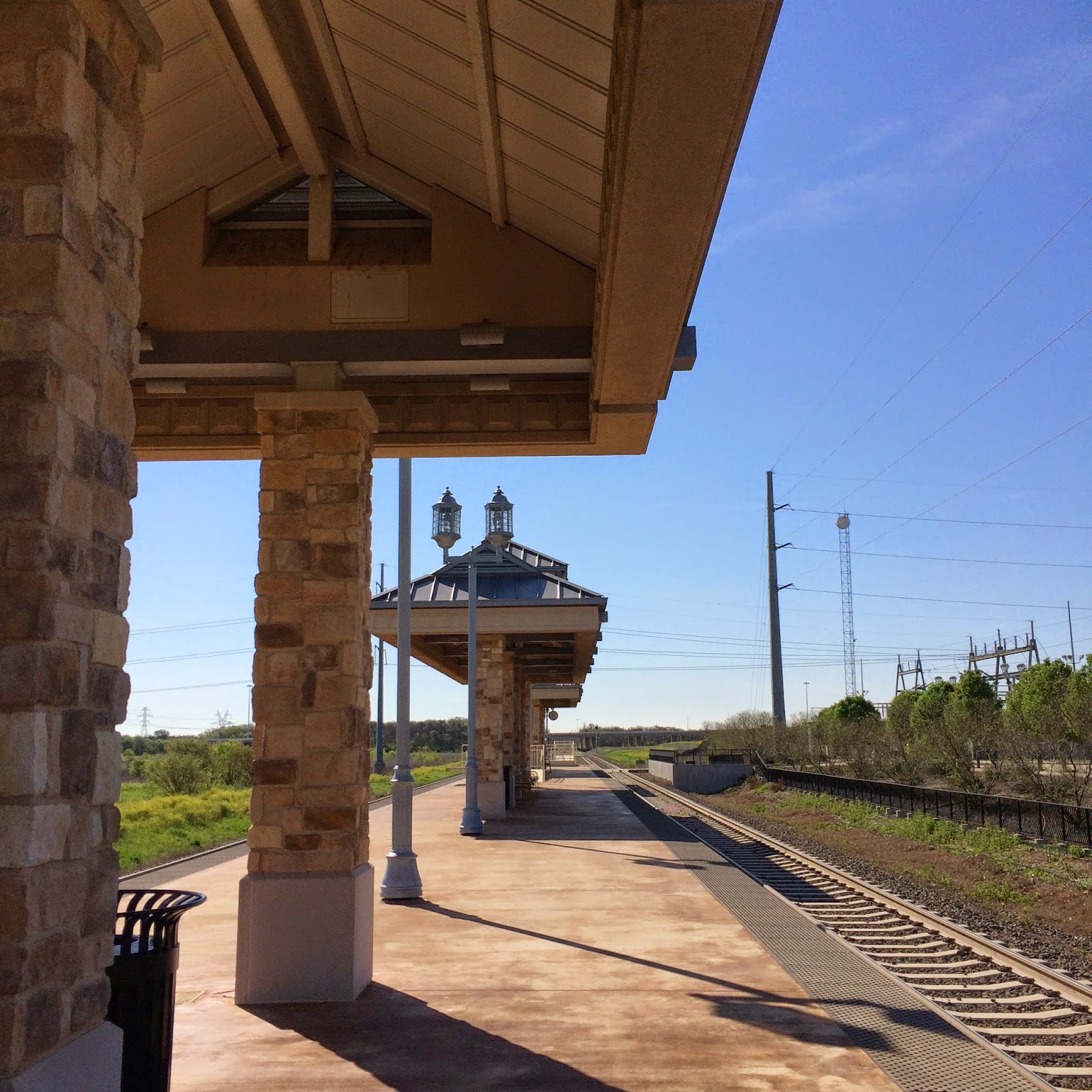 On a day like Saturday, that is not a problem. But any kind of inclement weather and passengers would find no protection here. Also, the big schedule on the marquee is only for weekdays, so we ended up missing the train, because... there are no TOILETS!

Took a panoramic once we got back (before we realized the marquee was wrong and we'd just missed the train).  Wahhhh! (We then got in the car and went to the alternate stop.) 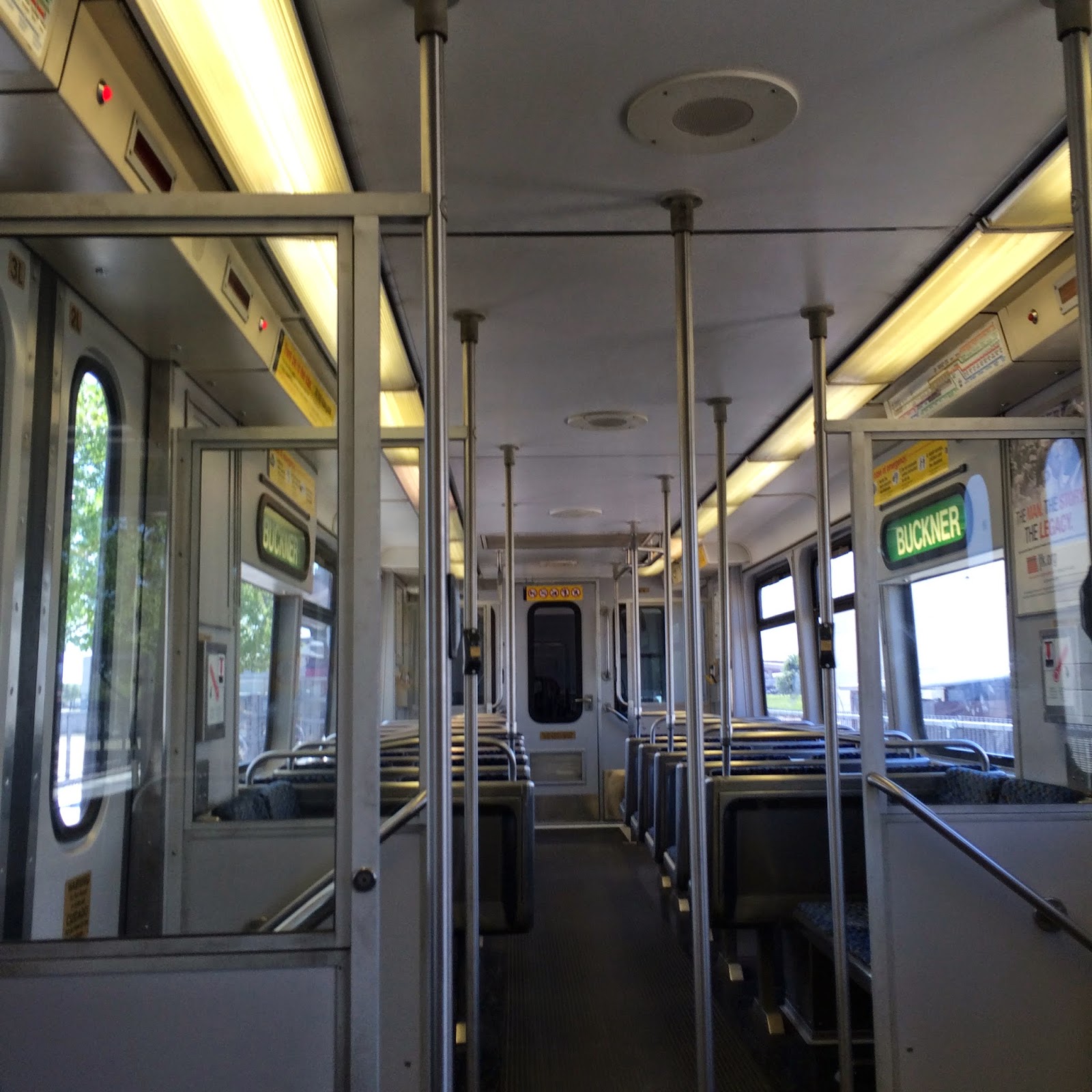 Inside of the DART Rail - which we got onto at the North Carrollton Station. No bathrooms there either. 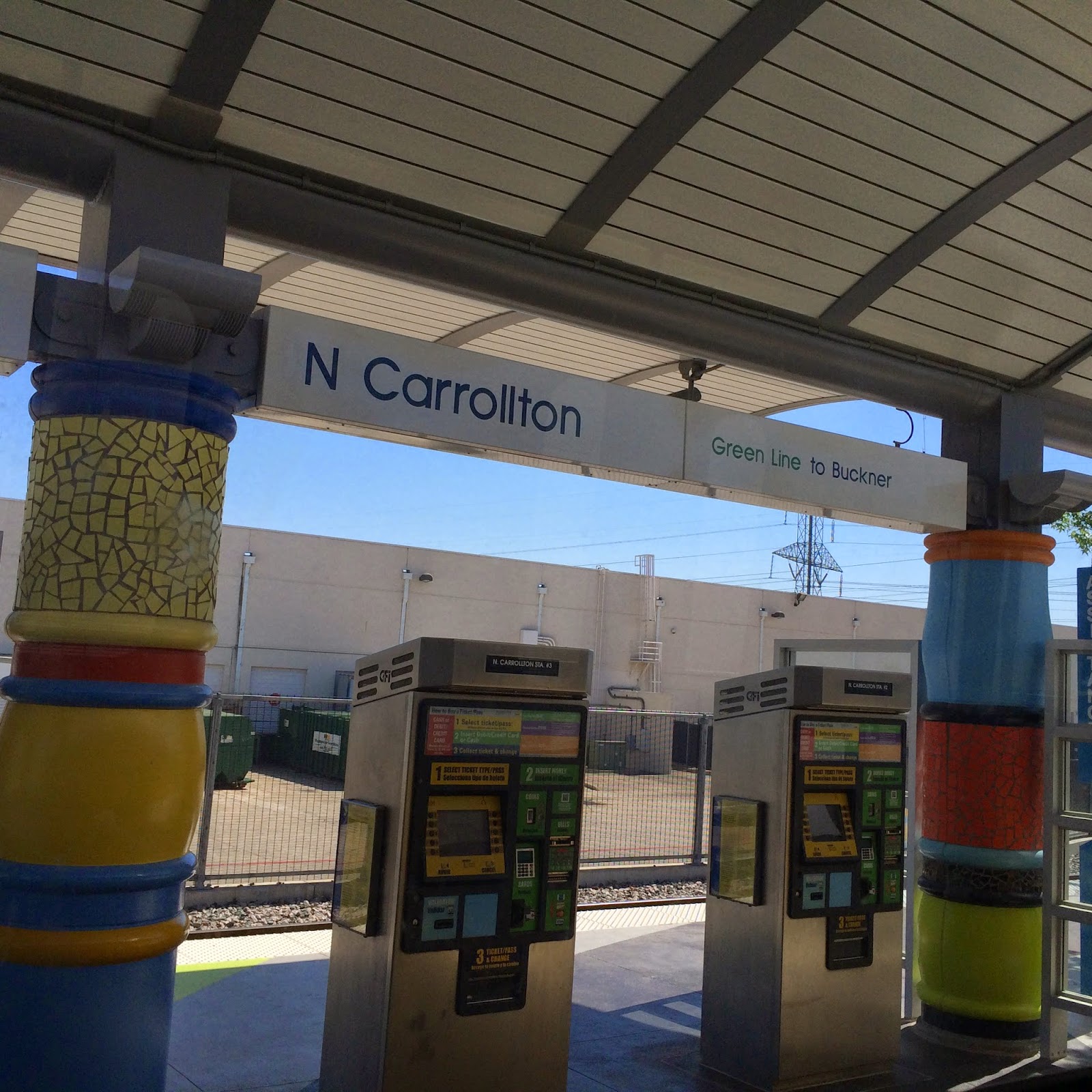 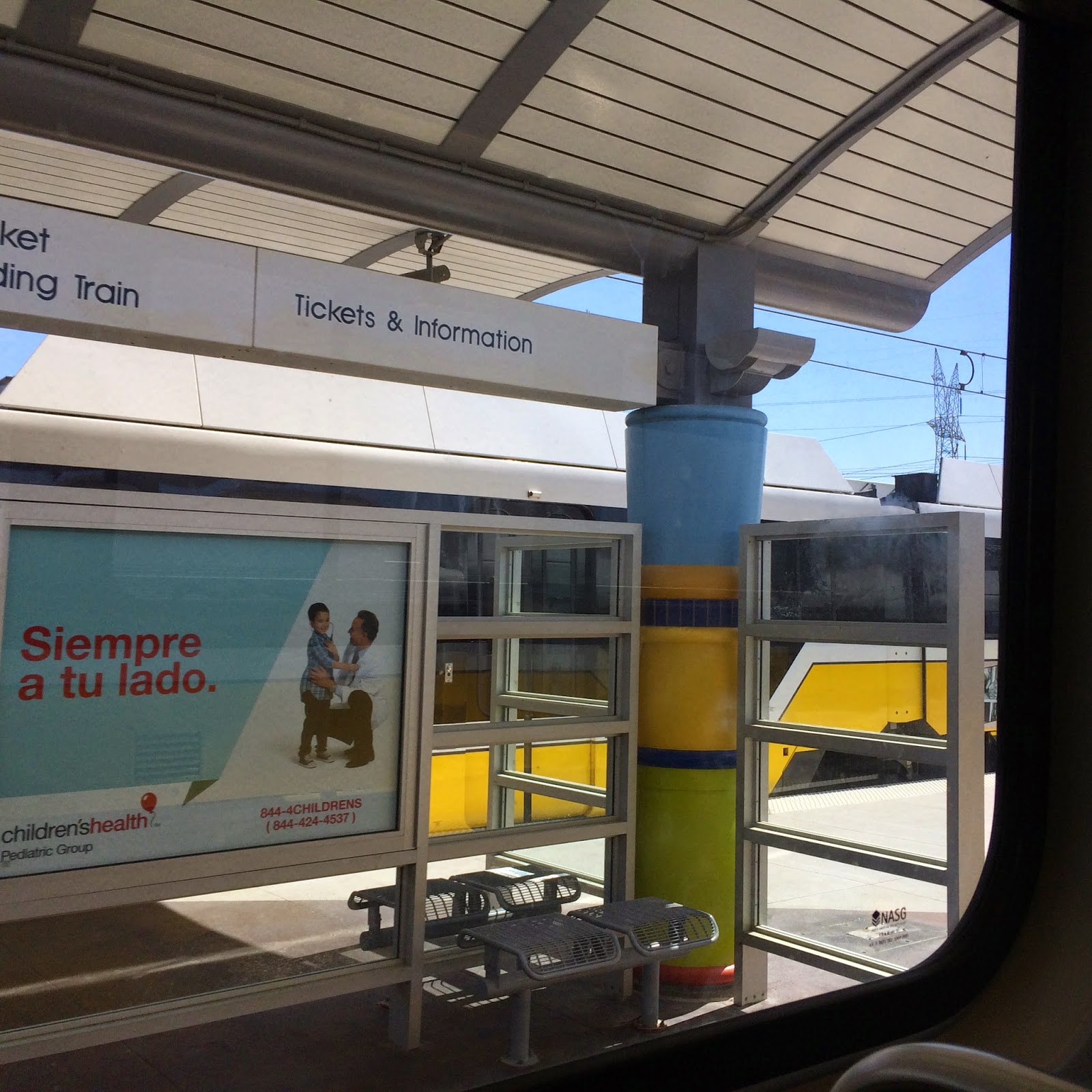 Incoming DART rail. (We're sitting in the other one.) 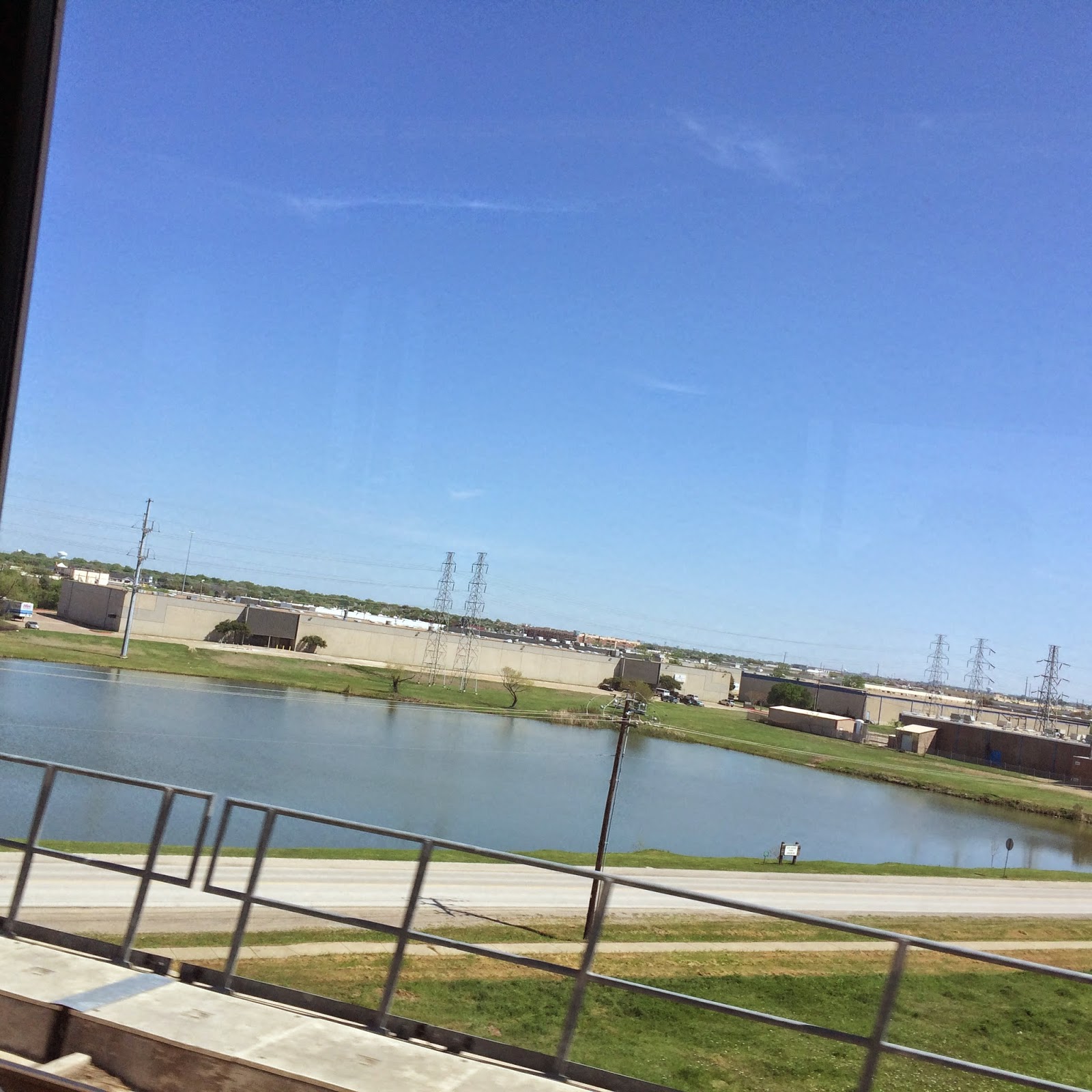 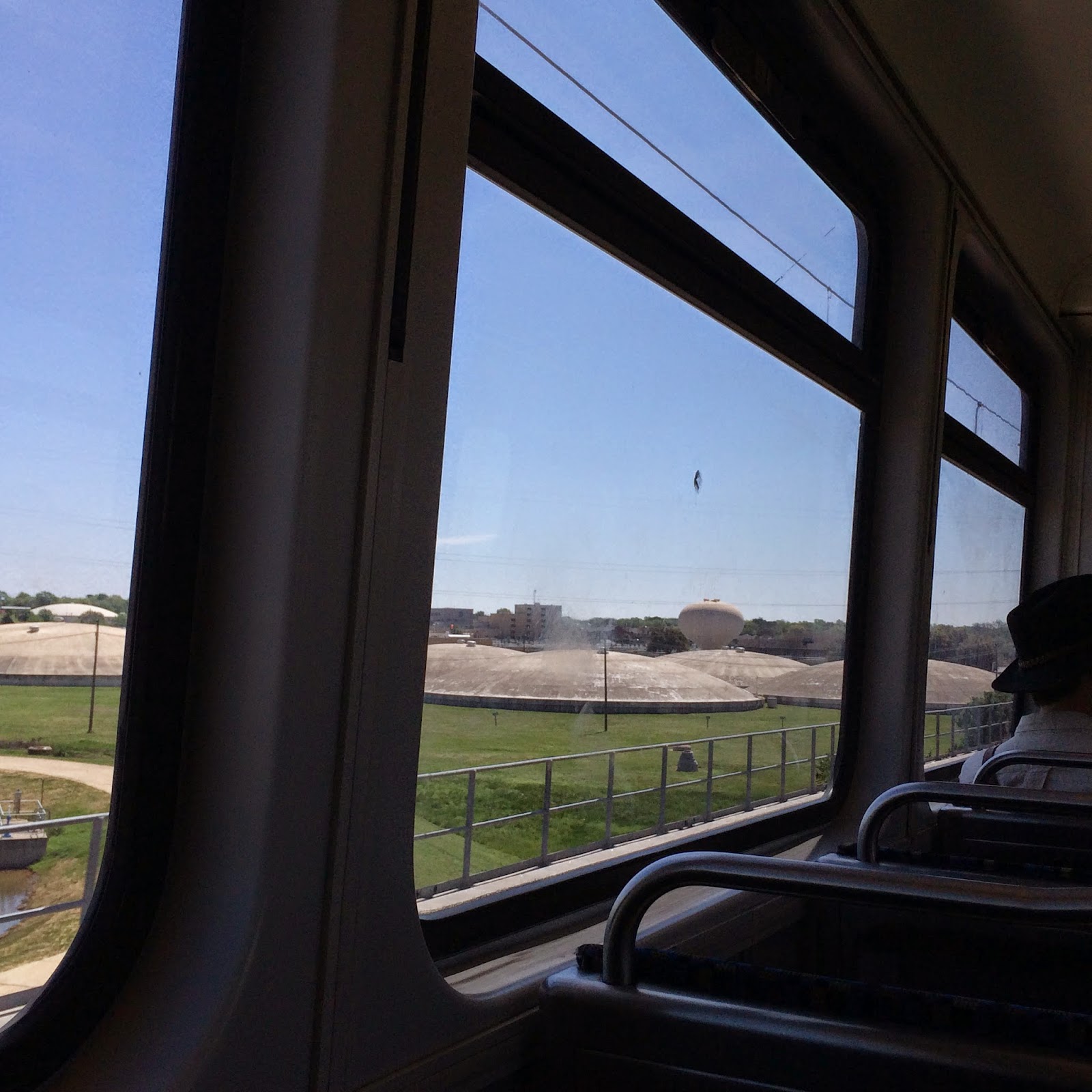 Some nice views on  the overpasses. 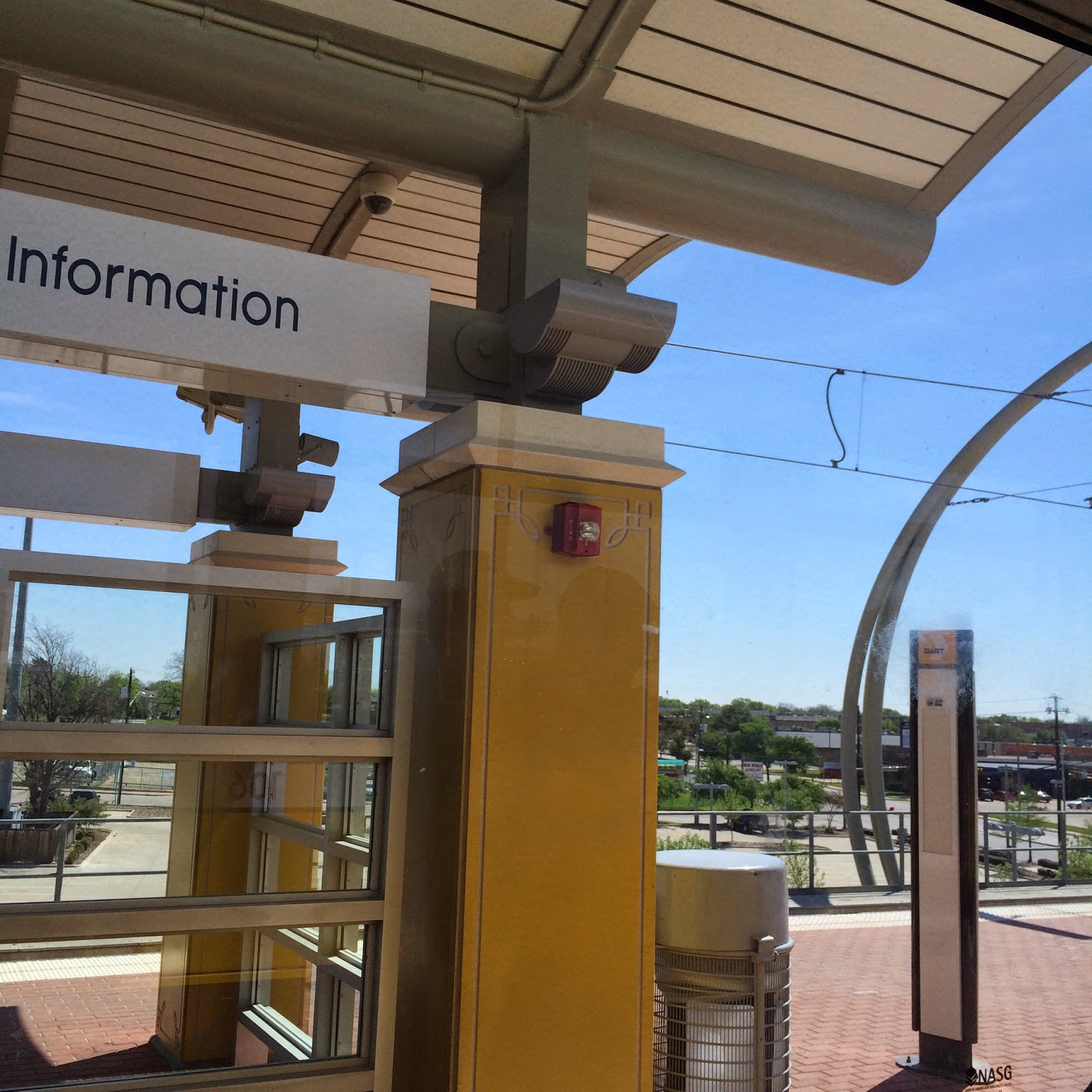 Each station stop had a different decor motif for their columns. Still no restrooms. 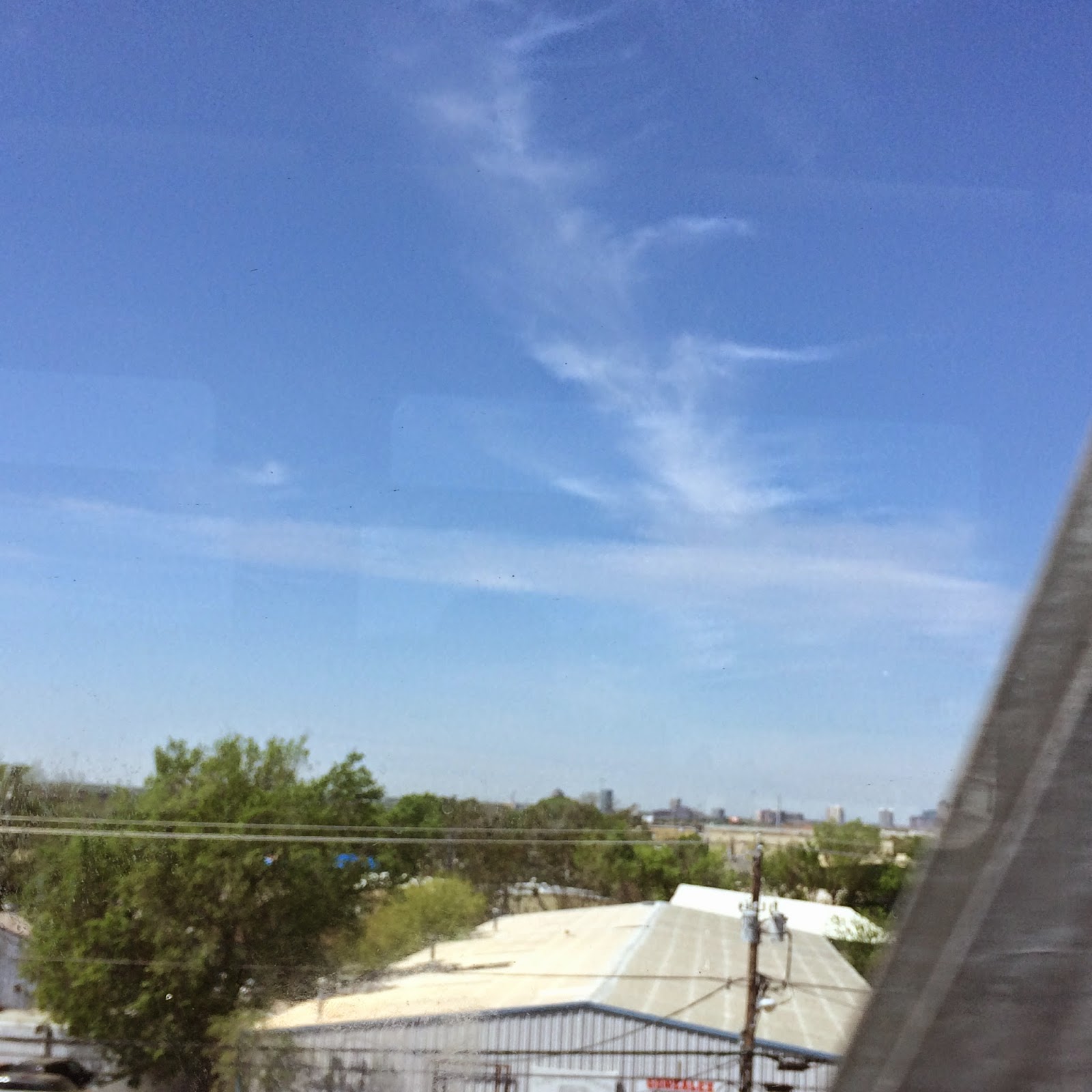 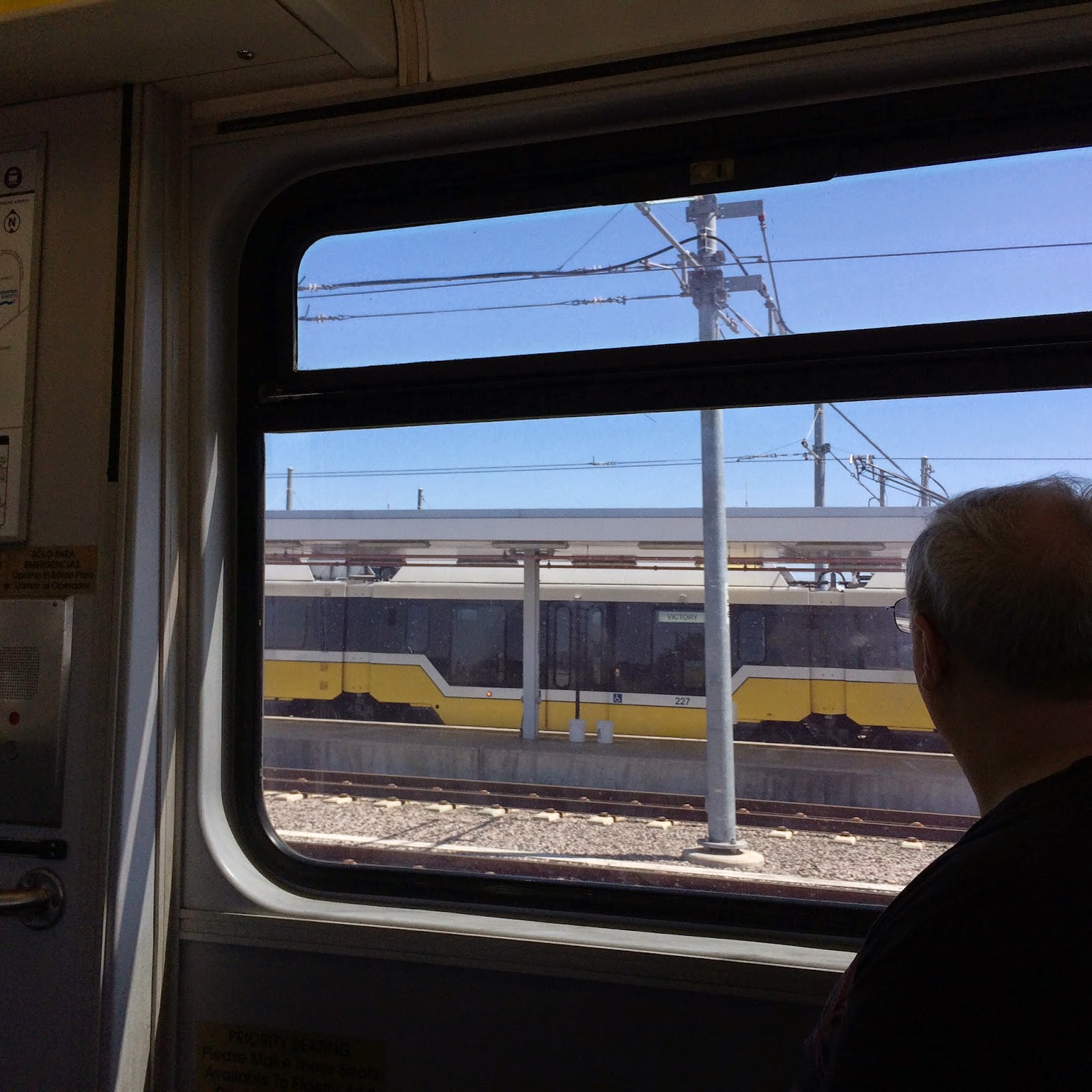 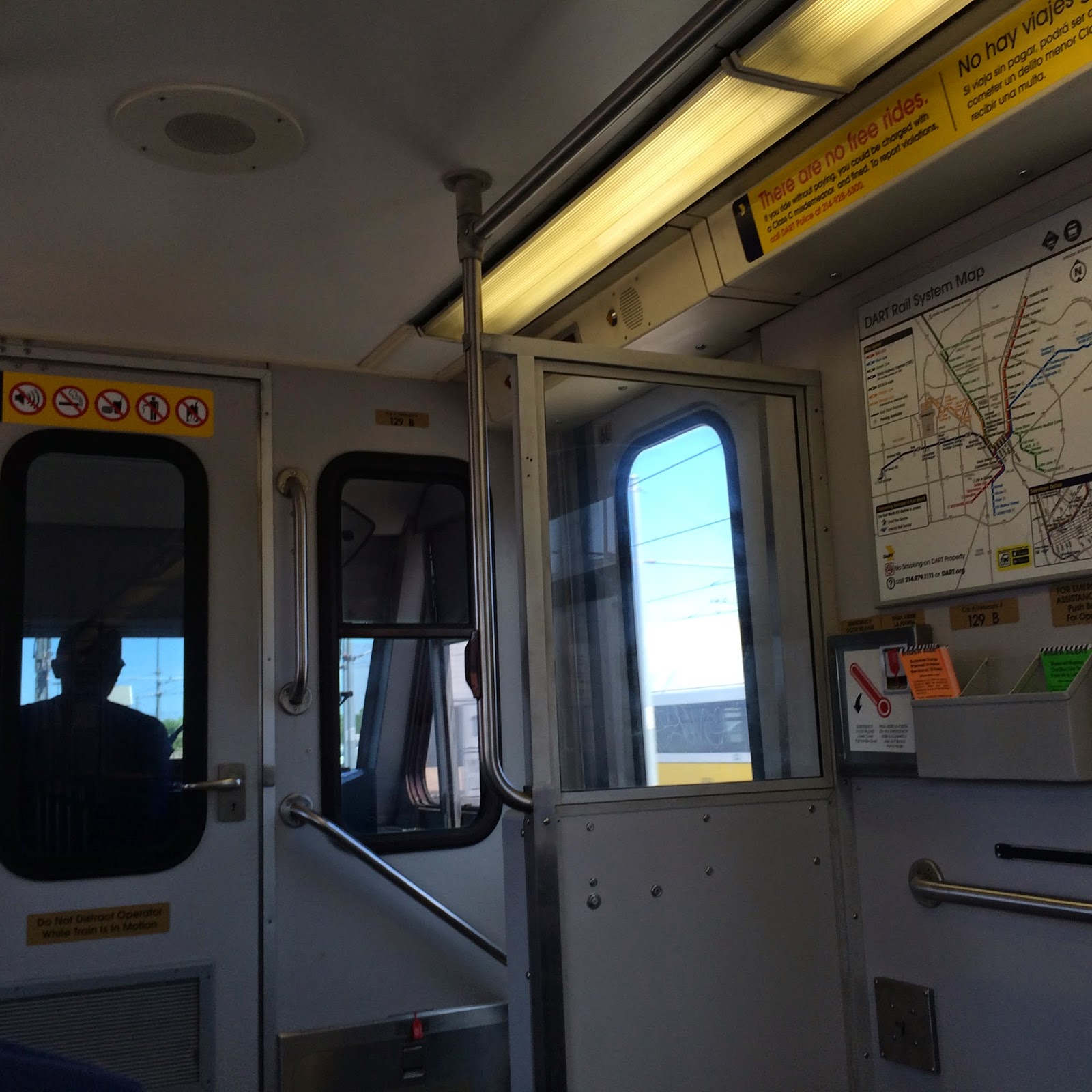 You can see the conductor and the rail map from here. Typical multi transit train setup. 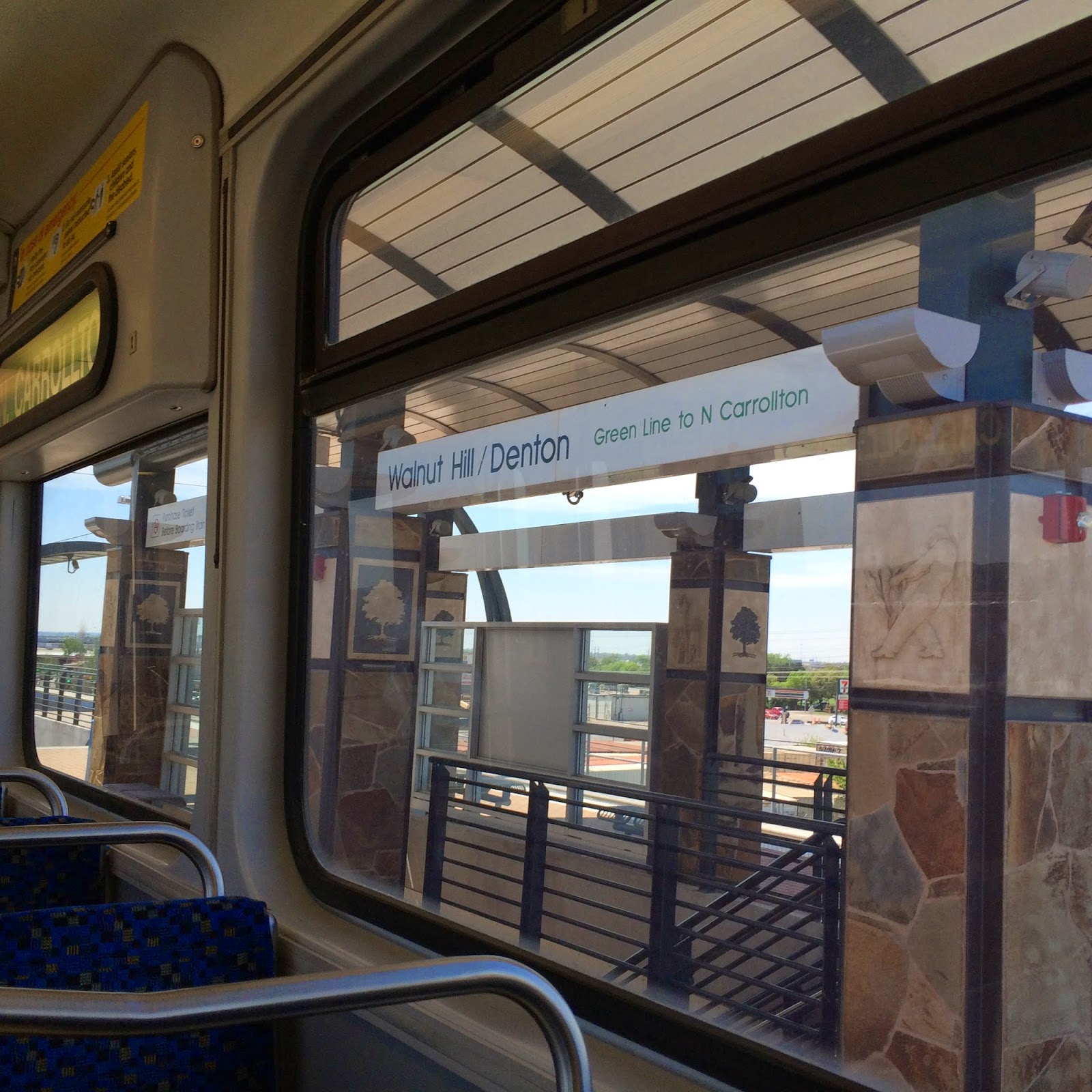 Walnut Hill Station - a nice southern feel to the columns. 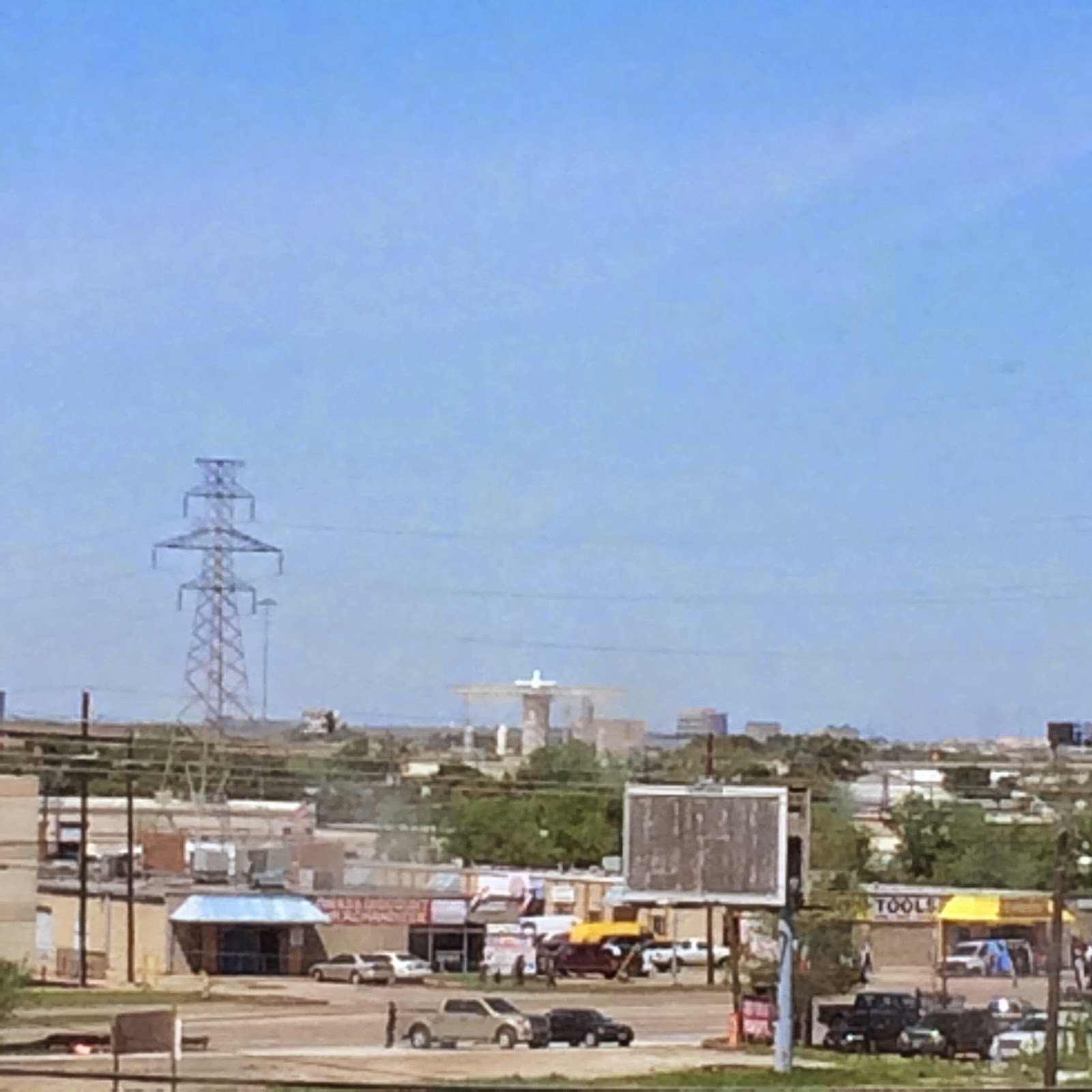 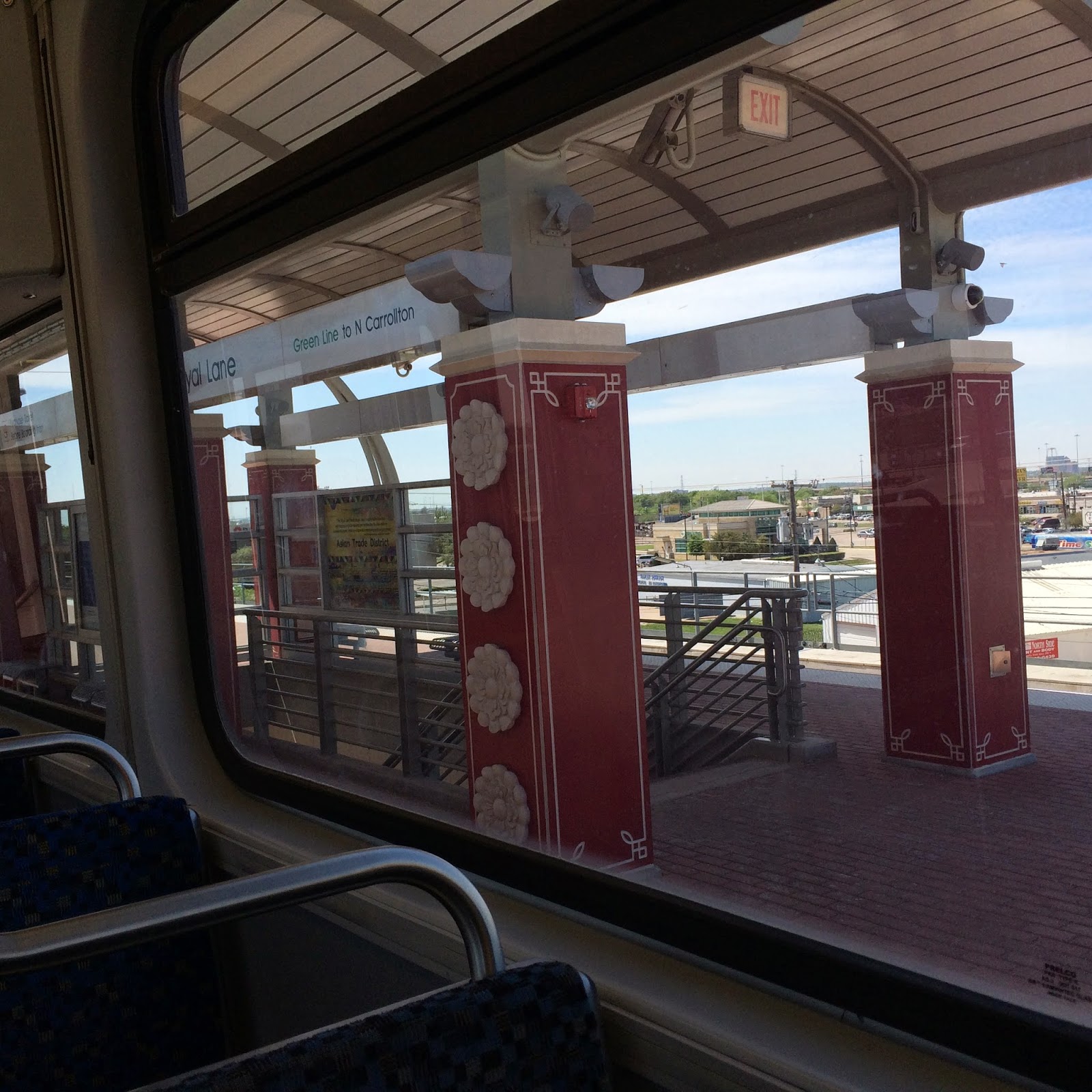 Some more of the stop decor. 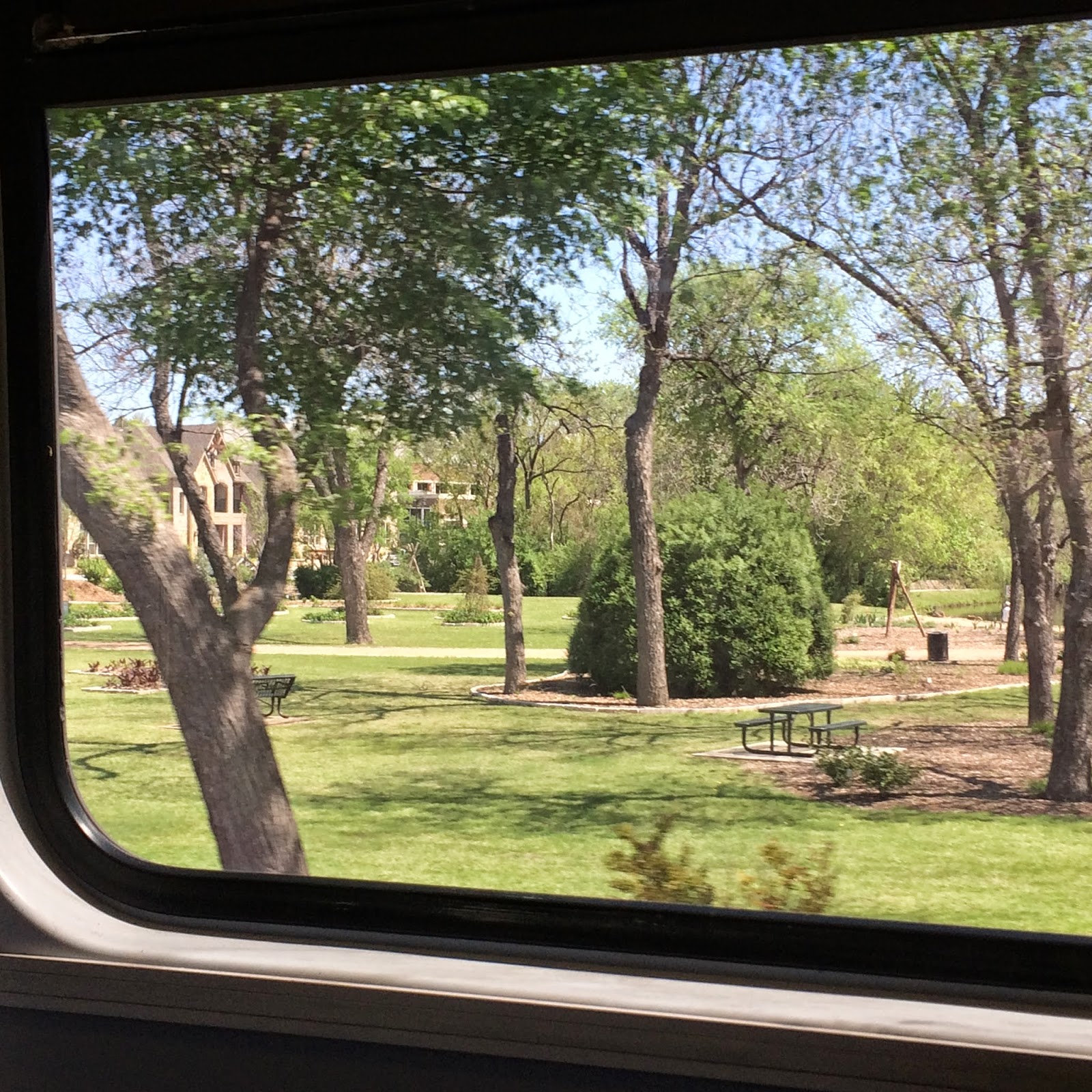 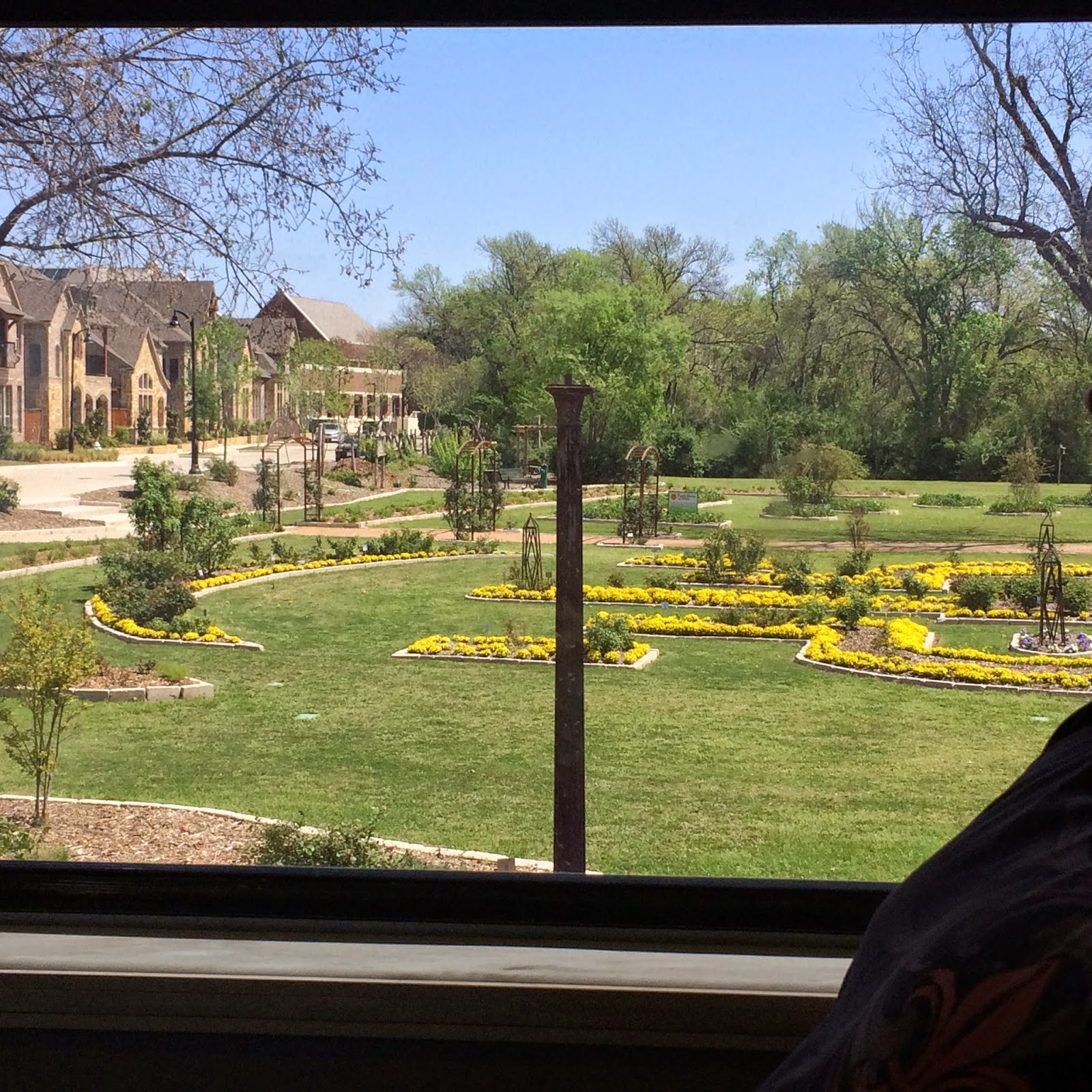 They've really fixed it up! 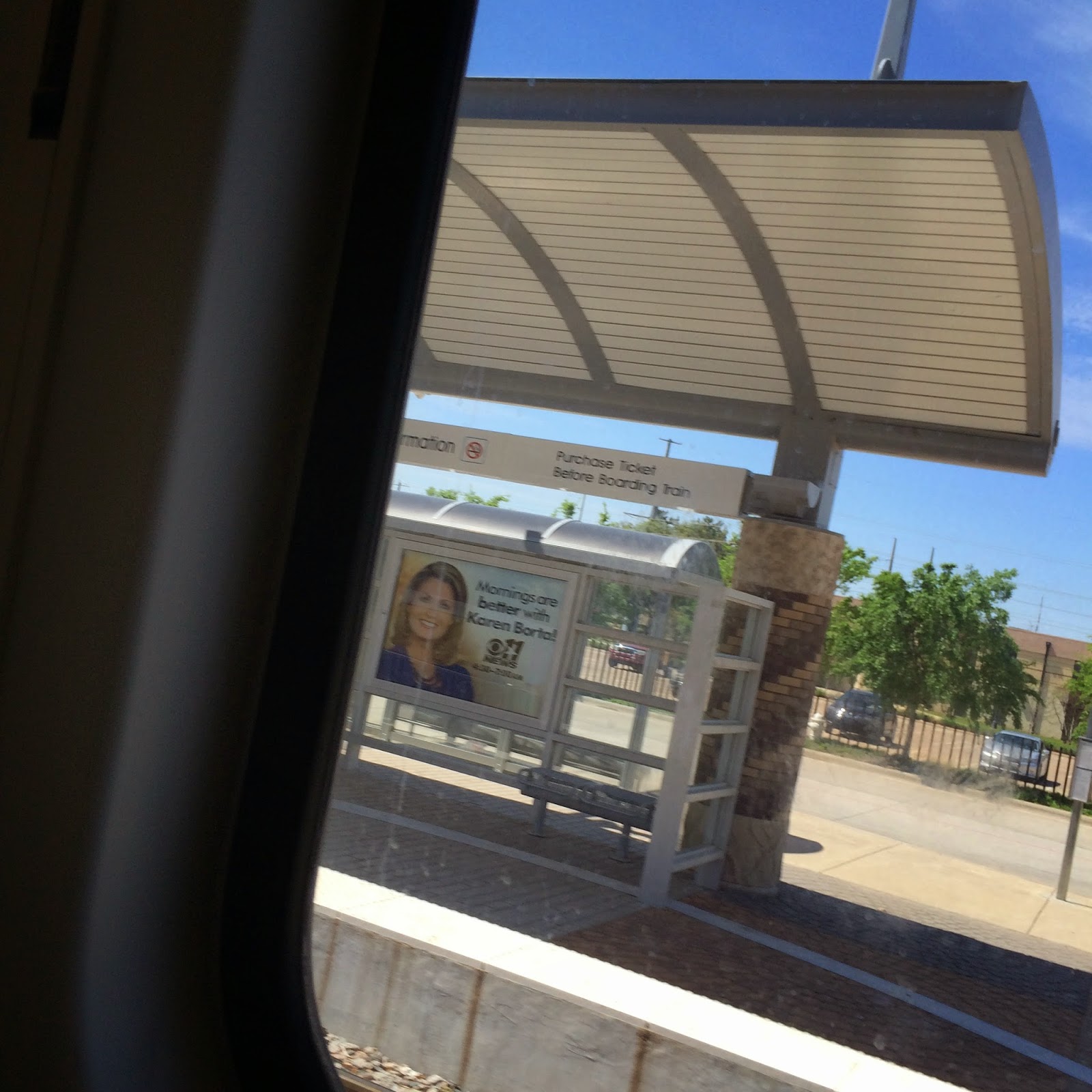 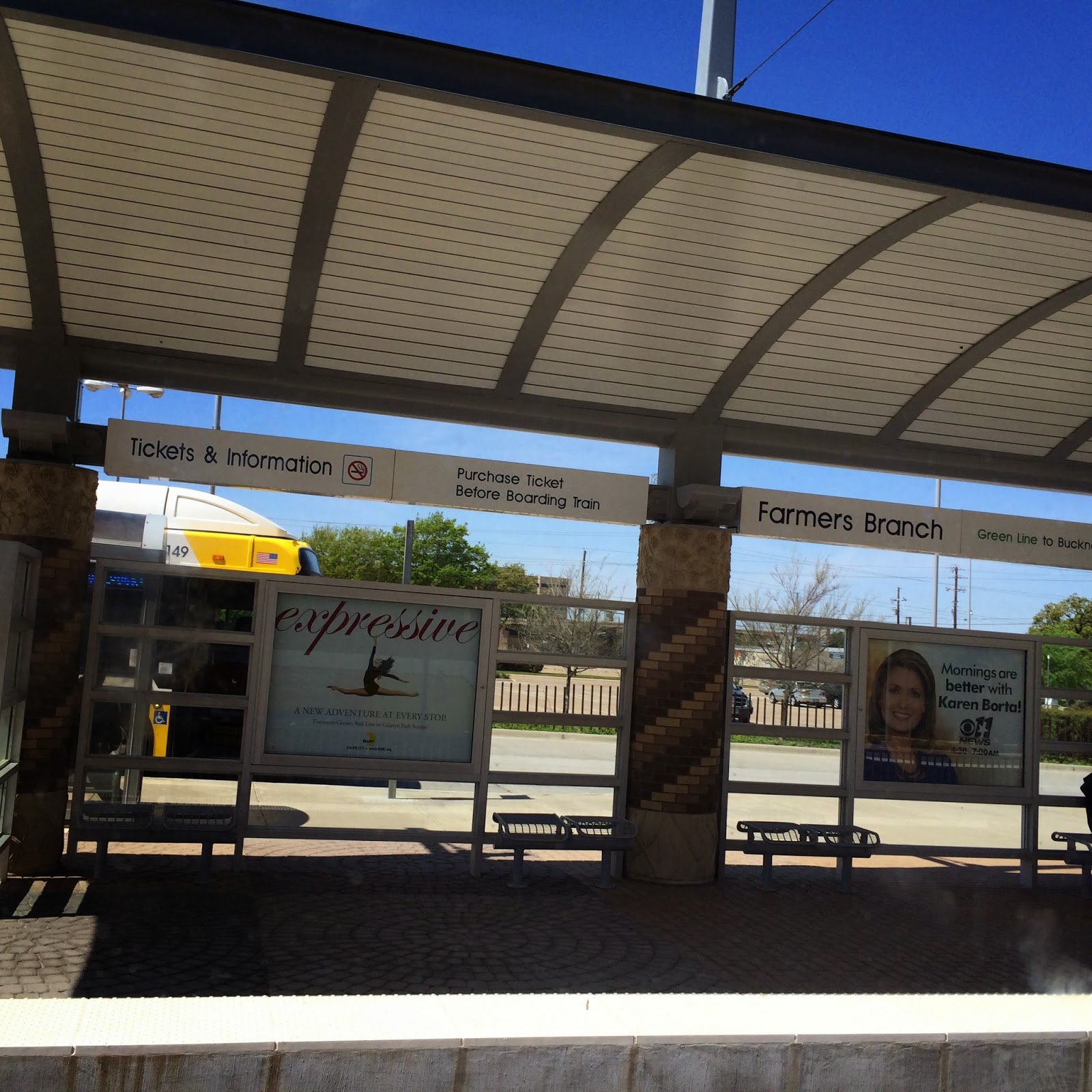 This is the extent of protection at all the stations we stopped at. :( Rain with some wind, and you'd be soaked. 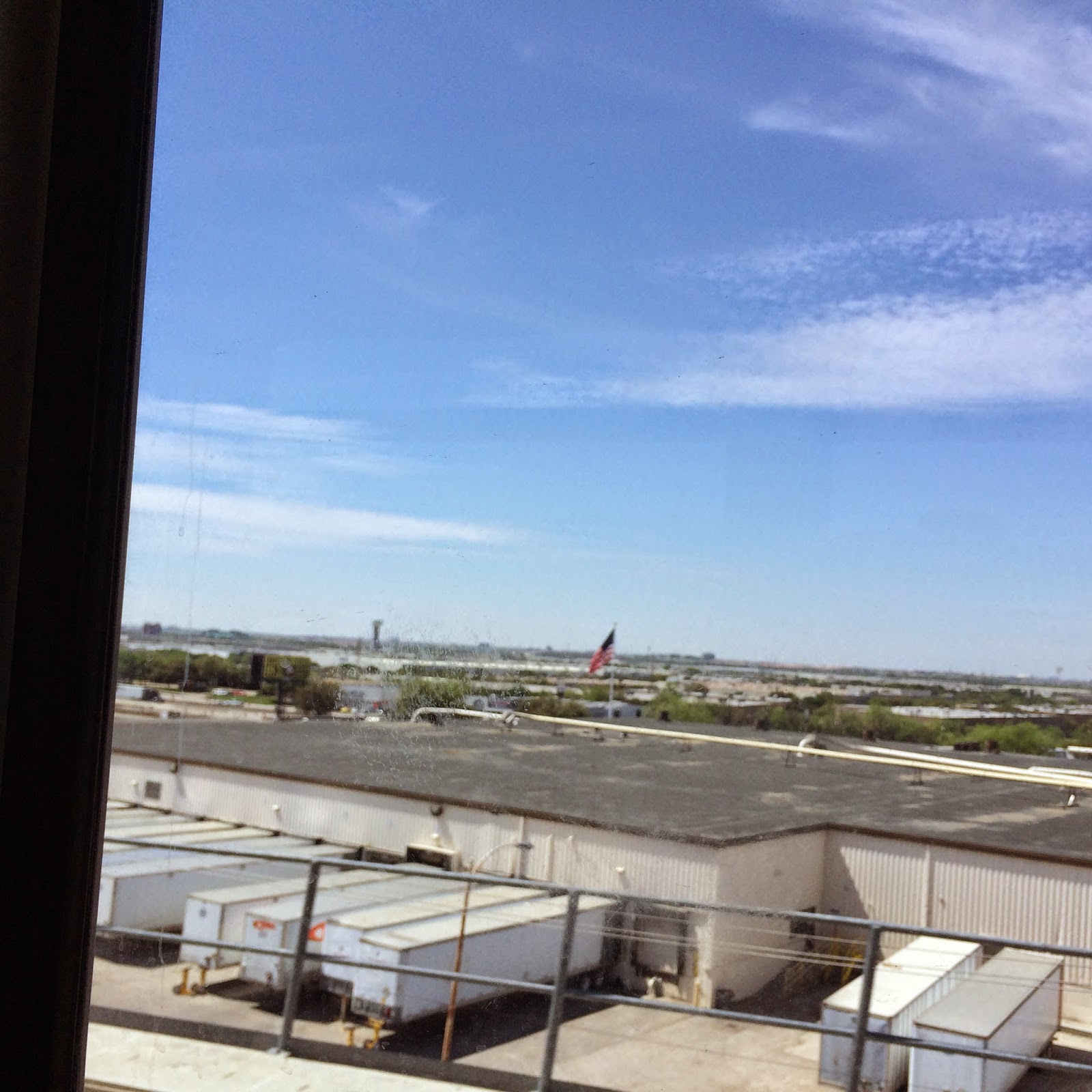 Really can see a long way from up here. 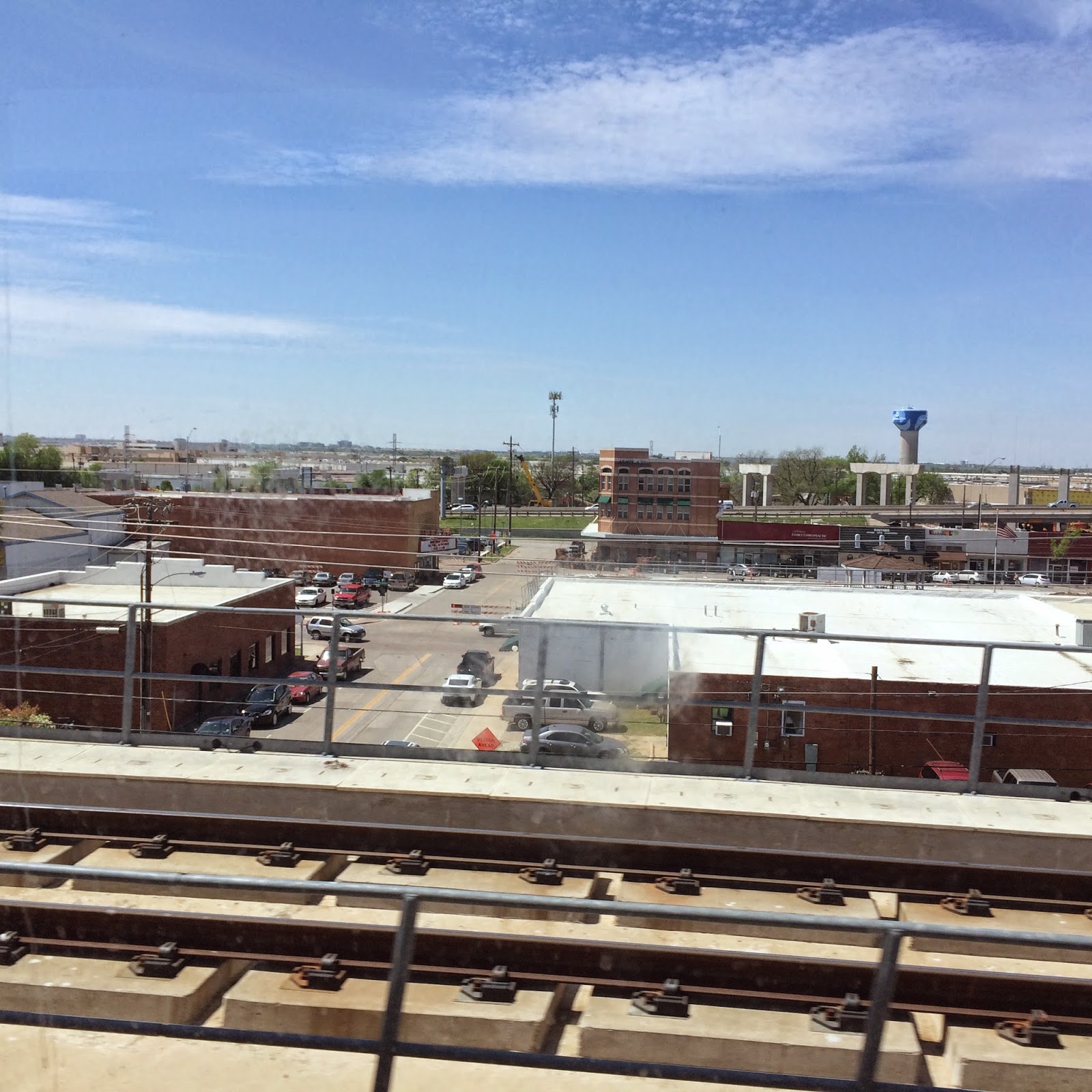 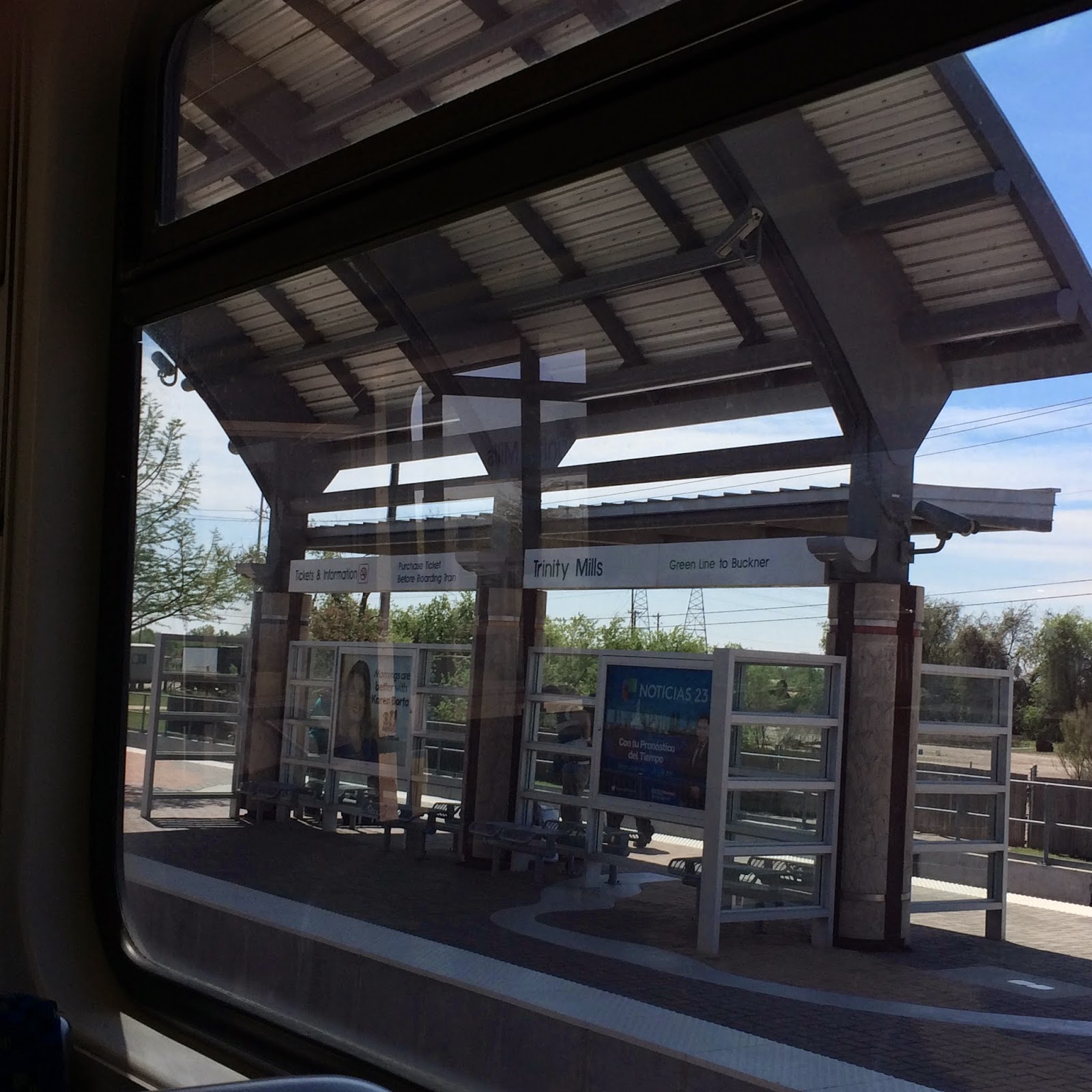 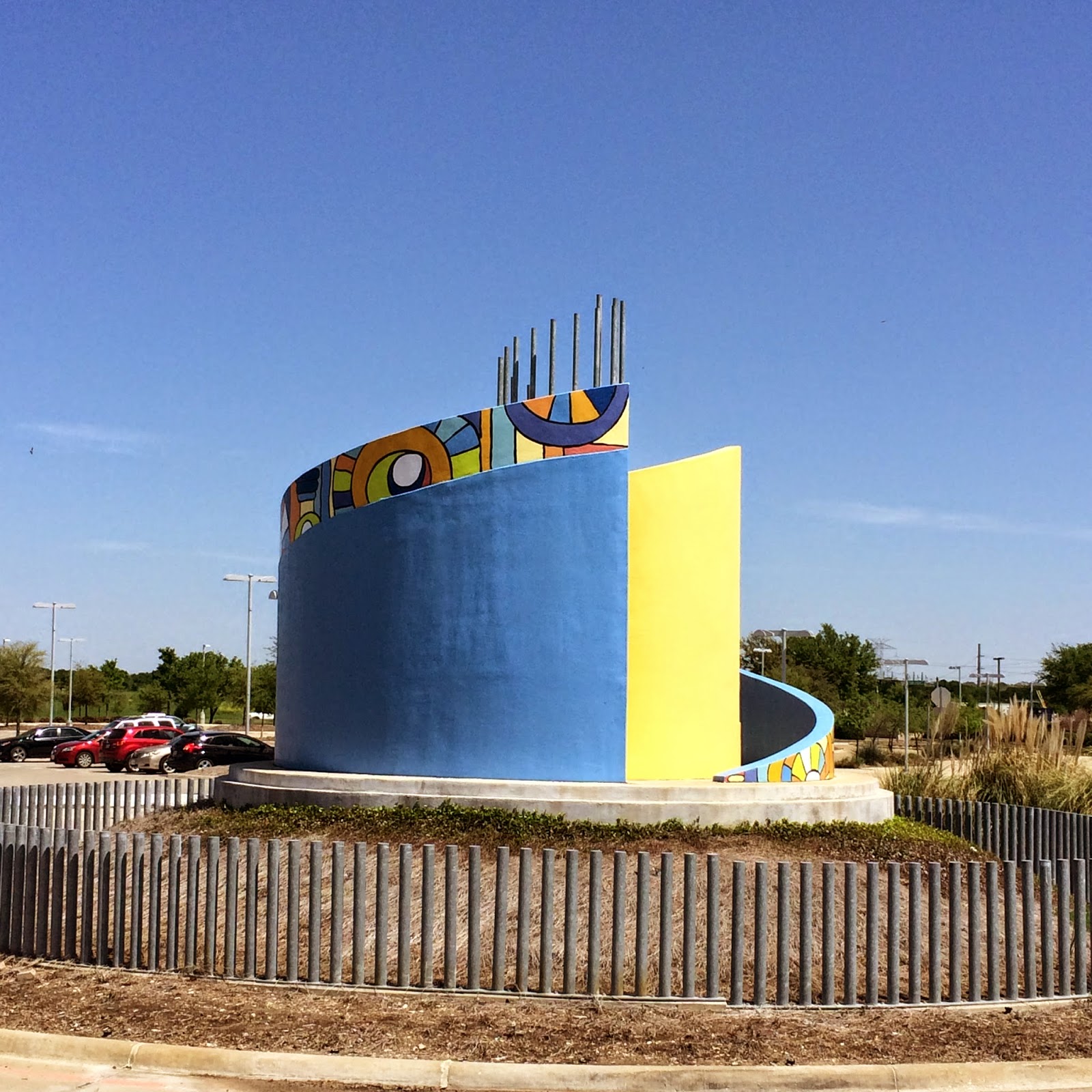 Big art thing at the North Carrollton Station. Wish they'd put in some bathrooms instead.

All the stations were clean and so were the trains. But...

We never did go all the way to our final destination. The bathroom situation caused us to hoof it in search of one and after that we were pretty much done. I now know why DART is losing money. I've no idea how the elderly or people with kids could afford to use DART rail without any kind of facilities being available. I spoke to a friend who uses the Red Line and said he'd seen plenty on that route, but the Green Line seemed to have none. Sadly, the lack of facilities definitely makes this a non-option for me.

So we had drama, frustration, and some cool stuff to this adventure. Next weekend? Maybe a new adventure, maybe not. :P
Posted by Gloria Oliver at 6:00 AM No comments: