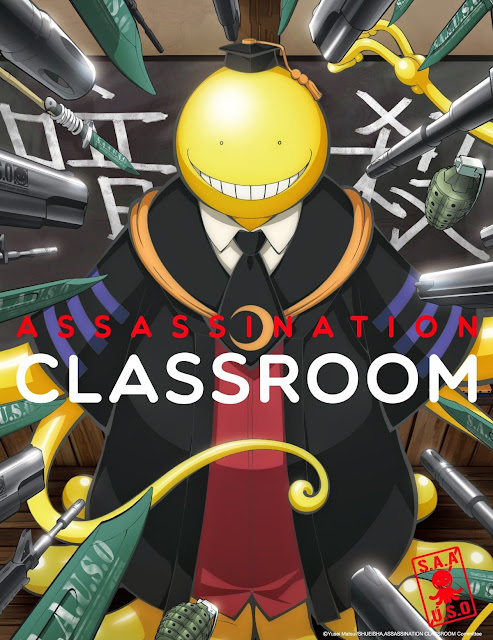 Assassination Classroom is a manga written and illustrated by Yuusei Matsui (OMG! He's on Goodreads!)

The manga is currently being translated and released in the US and the first season of the anime is out on Hulu and other outlets.

It is an amazing series with the weirdest premise ever! And it challenges us as humans as well as plays with words and roles.

Premise: A powerful being has destroyed a large chunk of the moon. Having proven his power, he tells the governments of the world that he will destroy the earth. However, he is willing to wait a year before doing so, thus giving them a chance to try to figure out how to destroy him, if they give in to certain demands....

He wishes to teach a class of students... Not only that, he encourages them to try to kill him. Though he's promised not to hurt any of them for doing so.

The big yellow guy is Koro Sensei - his name was given to him by his students as he did not have one of his own and the name is a play on words - Koro coming from the work Korosu (To kill) - Sensei means Teacher.

Koro Sensei cannot be harmed by conventional weapons (the government has tried!), but he can be heart by a specially formulated plastic. (The green knives on the poster are made of it. As well as the bbs that go in the grenades and the guns) He can also travel at Mach 20, and can move so fast he can make illusions of himself appear before different people if he so desires.

A government official is there to teach the kids how to handle themselves even as Koro Sensei truly teaches them academics. He's quite good at it, too. Even tailor makes the lessons and exams for each individual student. And he encourages them at every turn for them to do what they can to kill him. The governments have enticed anyone willing to try with a 20 Billion Dollar reward. (Only high officials, the Principal of the school, and the students, know what's going on - the governments don't want a panic.)

The kids are in Class E of a very prestigious school. They are considered the losers of the student body and are housed in an old school building at the top of the mountain - no air conditioning, the butt of everyone's jokes, the 10% to be sacrificed so the 90% will excel.

Nothing is ever as it seems. Especially when the monster, Koro Sensei, seems more human than most of those around them. It is from him that the students in Class E start learning they do have worth.

Brilliant and fast, Koro Sensei also has a strange collection of quirks and issues. Chaos in a yellow package. And way too much fun!

I hope you go check it out. Let me know what you think! 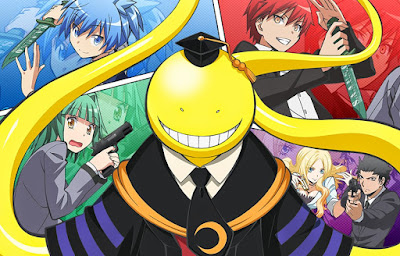 Posted by Gloria Oliver at 6:00 AM No comments:

Progress on a Possible YA Hugo Award

Sasquan, the 2015 Worldcon in Spokane, has released several committee reports that will be discussed at the business meeting of the WSFS ("World Science Fiction Society") next week. Among these reports is that by the YA Hugo Committee.

Bad news first - no decision on a YA Hugo Award this year. Good news, though, the Committee recommends it be reformed for another year so that it can focus on the issues involved in having a Campbell-like YA/teen literature award.

I've blogged before about the business meeting in 2013 at LoneStarCon 3 in San Antonio and the treatment there of a YA Hugo proposal. Worldcon in 2014 was in London, where there were several standing-room-only YA panels. LonCon 3 reformed a committee to investigate a YA Hugo proposal. Meanwhile the NASFiC (Detcon1) in 2014 created the Detcon1 Award for YA and Middle Grade Speculative Fiction and was able to get nominations for both categories from its supporters and attendees. The winners were listed in Locus.

Looking at the YA Hugo Committee report for this year, I'm feeling a bit more confident. The committee has definitely done its homework. The history of the YA marketing category is covered. The usual questions/arguments about the proposal are brought up and answered. How other organizations define YA for their awards are discussed, though in the section for comparisons between other YA awards by other organizations only the Newbery (which is for children) is brought up. True, the Newbery is better known than the Golden Duck Awards/Hal Clement Award and has been around longer, so that might be why that award was used.

So, yes, I am hopeful that the committee might be able to develop some award for YA/MG. It would be nice if it was a Hugo award, but even the Campbell (Not a Hugo (standard declaimer whenever the Campbell is mentioned)) is voted on by supporting and attending members of a Worldcon. And that is good.

What are your thoughts?

"Someone is sitting in the shade today becausesomeone planted a tree a long time ago."

This Warren Buffet quote inspires me. It's simple, yet so amazingly powerful.

1. A tiny seed can create something as massive as a tree, even a sequoia tree.

Think of the giant sequoia tree in California, USA. It averages around 26 feet in diameter, weighs around 4,189,000 lbs. and reaches heights of 275 feet. According to Wikepedia, "Record trees have been measured to be 311 feet in height and over 56 feet in diameter. The oldest known giant sequoia based on ring count is 3,500 years old."

Hard to imagine, isn't it.

Well, this can easily relate to writing, to content marketing, to business . . . to just about everything in your work and life.

Small positive actionable steps, no matter how tiny, can create massive results. You may think your writing and marketing efforts aren't moving you forward, but think of how long it takes that tiny seed to grow into that tree that gives shade.

2. What you sow today can have benefits for many tomorrows.

You may reap the benefits of your writing or content marketing or business efforts far into your future, so take that initial step. Or, maybe it's expansion that you're thinking about, or a new strategy.

Keep in mind though that every living thing needs sun, water, and food to grow. So, when you take that step (plant that seed), be sure to give it the nurturing it needs to become what you believe it can be.

I hope you found this information interesting and helpful. Too advanced, not enough, just right? I’d really love to know, so please leave a comment – good or bad or email me at: karencioffi@ymail.com
P.S. If you liked this article, PLEASE SHARE IT BELOW!