Good to see you. :)  Currently trying to do way too many things at the same time. "Why is that?" you might ask...?

That would be, of course, due to the recent release of my 7th published called "Jewel of the Gods."

So I am knee deep in posting about it everywhere. Making/setting up different marketing pages, notices, what have you. Will it make a difference? Probably not - but you can't play if you don't try. One never knows what might trigger an avalanche, so we throw rocks every where we can.

Years ago, I can across this really neat site where you could upload pictures and turn them into puzzles.  Not only that, you could time yourself! You can even increase the difficulty by breaking it up into smaller and more numerous pieces.

So here's one for you guys to play with. :)  Care to challenge your yourselves? Bwahahaha

(I've embedded it into the blog post - but in case that doesn't work....click on the picture to go to their site. Or you can see the embedded version at my website.)

Online jigsaw puzzles from JigsawSite.com
Posted by Gloria Oliver at 6:00 AM 2 comments:

It's been a good year so far for space projects and sky-watching.

For those of us planet-bound, there has been a lunar eclipse in April, the Venus-Jupiter conjunction at the end of June, and even the rare appearance of Northern Lights in my area (I didn't see any, but some in town got some good pictures. All I got were mosquito bites).

In June, the European Space Agency's Philae resumed contact with its orbiter Rosetta.

New Horizons brought interest in space back in a big way earlier this week. Yes, I was one of those watching NASA TV online when New Horizons sent a picture before going dark on its flyby. The new pictures that have been released since contact has resumed have been gorgeous to see. Mountains! Craters! A "mountain in a moat"! Fissures! The detail is fantastic. The above site and NASA's JHU Mission to Pluto are the places to check for updated Pluto and Charon pictures if you want to see them before they're released elsewhere. If you like New Horizons on Facebook, you'll also see the images as they are released. It's also on Twitter.

The Planetary Society also has its blogs on non-planet objects and the first news conference.

For those preferring videos, Nova has aired "Chasing Pluto" and there is a documentary from NASA "The Year of Pluto".

I have been so pleased that women have been recognized as part of the New Horizons team and even reported as such in articles. I'm sure women have been involved in previous space projects, but you seldom saw them on camera. Even more encouraging to young scientists is The Student Dust Counter, a project designed by engineering and physics undergraduate and graduate students.

This isn't the last space project that will be reporting back. Dawn is still exploring Ceres, and Juno is still on course for orbit around Jupiter next year, though both have some changes reported in a Planetary Society blog recently. The Planetary Society maintains a chart of solar system missions with monthly updates on upcoming events.

I feel like a little kid again, looking up at the night sky and realizing that there is so much out there. It's been great to see that the New Horizons team seems to feel the same way. Seriously, how cool was it to hear that the dark area on Charon was informally named "Mordor"? I'm hoping the excitement generated by the success of this project produces more missions and interest in space. I'll be expecting more science fiction television shows and YA and children's books, but I'm hoping for many more actual space missions to come.

Posted by Kathy Sullivan at 12:35 AM No comments:

LIFE WITHOUT THE INTERNET, A HORROR STORY

I'm late, I'm late, for a very important date. Yes, I'm late posting today. I've been without Internet Service for two weeks and am at the library now, reading emails and other good stuff.

It started one creepy Friday evening. I turned on my computer. I clicked on the blue “e” with the golden crown. The screen popped up. Blank, except for these words. You’re not connected to a network. Then it gave instructions how to fix the problem. Gasp. Nooooooooo! That can’t be. It worked earlier in the day. But now those little green lights on the modem in the window were winking at me. 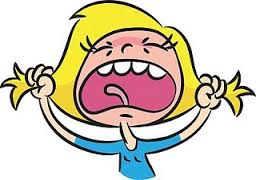 Okay. I took several deep breaths. No big deal. It’s happened before. I’ll just unplug everything, wait a few minutes and plug it all back in. I paced the floor, thinking of all the stuff I needed to do on the Internet. A few minutes later, I connected all the wires and waited for Google to show up. No luck, so I tried again. Three times I tried. Those stupid green lights just danced and laughed (don’t say lights can’t talk. These were evil lights.)


I know when I’m beat, so I turned off the computer and told myself it would be all right tomorrow. The next day, however, I decided a wicked genie evidently cast a spell on my Internet Service. (To protect the innocent, I won’t  tell who it is/was, since I’ve since cancelled with them.) Since I was having no luck with making contact, I called the company and after I pushed the right numbers a few times, I finally talked to a very nice young man. He apologized and apologized, and assured me they were working on the tower and service would be restored in two to twenty-four hours. Well, that was 12 days ago.


I must have Internet now, you think, since I’m posting this, right? Yes, I will tomorrow, but with a different provider. They are supposed to install, or whatever they do my service Thursday afternoon. Yay! At the moment, I’m posting from the local library. They have been angels about letting me use their WIFI any time I want to. I’ve been to the library almost every day. And you know what? I’ve enjoyed the quiet, the no interruptions, and the occasional child that wants to show me his/her toys and reminds me of why I write for children.


I also have discovered that life goes on without the Internet. My house is now much cleaner. You can almost see the flowers in the flowerbed where weeds once choked them out. I’m working on putting pictures in albums. I have a slew of them. And I’ve been writing, though slowly, which is just me.


Maybe I needed a break. Maybe I needed a reminder of the real world. Oh, but I miss the cyber world. Hope to be back tomorrow.
What do you do when your Internet takes a vacation?

Email ThisBlogThis!Share to TwitterShare to FacebookShare to Pinterest
Labels: Internet, life goes on

TOP 5 FAVORITE HORROR NOVELS
I admit it. I’m a huge fan of horror novels, especially ones with a supernatural twist that force me to keep the night light on. To me, a sign of a great novel is when the pages of the novel haunt my dreams. 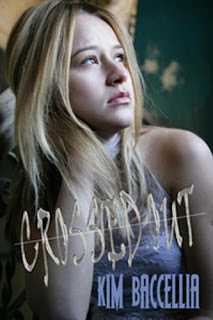 Crossed Out has subtle horror with Stephanie battling evil while helping murdered girls toward the light. I’ve always wanted to write something edgier and frightening. Maybe in the future?
Here’s a list of my top five horror novels. There’s something for everyone—a haunted house, demons, zombies, and a post-apocalypse tale. Warning: Proceed with caution and make sure you have a night light or two handy! 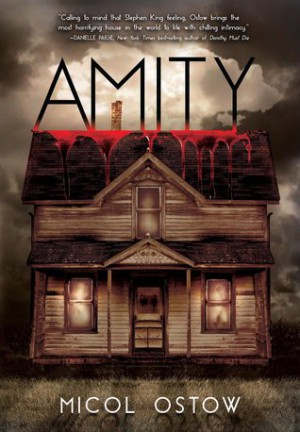 #5: AMITY by Micol Ostow
Everyone remembers that Amity house in Long Island where a family was killed and others claimed that paranormal influences were the cause. That was in 1975.
In this novel, another family has moved into the haunted Amity house some ten years later. Once again, horror strikes. Just like the movie, this book delivers with horror and edge of the seat terror. 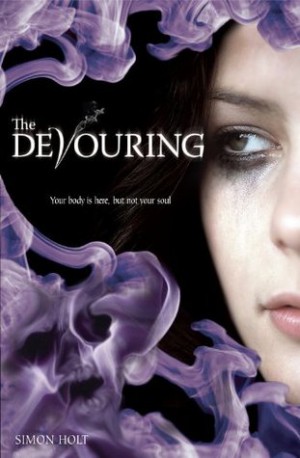 #4: THE DEVOURING by Simon Holt
A creepy tale of a girl who accidentally unleashed something sinister by reading from a book she found. This puts a whole sinister twist on the Greek mythology of a Pandora box.
**The sequel is equal parts creepy and haunting! 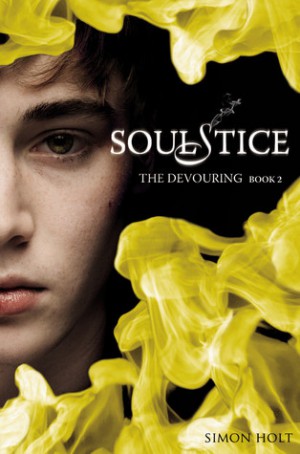 #4 (tied): SOULSTICE by Simon Holt
It’s been six months since Reggie saved her younger brother Henry from the Vours, those demonic beings that inhabit human bodies and feed on your worst nightmares. Then an unexpected person shows up and sends Reggie’s nightmares into reality. Nothing is what it seems.
I couldn’t put this book down! Edge of the seat suspense with twists and turns throughout. The nightmares are intense and very graphic. Reggie’s battle against the Vours is haunting yet you’ll find you can’t stop reading!

#3: ANNA DRESSED IN BLOOD by Kendare Blake
I really loved the whole twist on the ghost hunter theme. Only here, it’s a ghost slayer. Someone who goes out and slays ghosts. Yes, this person destroys the whole essence of a ghost. The unique twist, atmospheric scenery, and a forbidden love is the stuff of great novels. 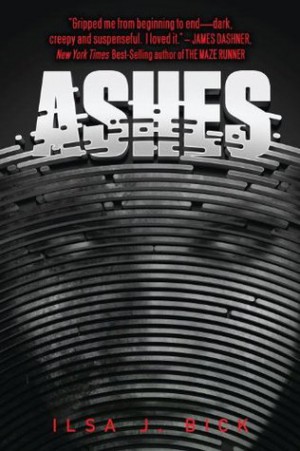 #2: ASHES by Ilsia Bick
What I love about this story is it’s not the usual zombie tale. No, this one doesn’t follow any rules. For one thing Bick isn’t afraid to have her characters go to hell and back. And believe me this new world is hell. There are some very intense scenes that would give Stephen King a run for his money. But the beauty of this story is how the little details strengthened the storyline. And the whole premise of an electromagnet wave tampering with someone’s brain in a horrific way is very plausible which makes this story even more terrifying and wonderful.
And finally, anything by Stephen King. Some of my favorites include: the living haunted hotel in THE SHINING; the bloody Prom scene in CARRIE; and the creepy killer clown in IT. But my all-time favorite….

#1: THE STAND by Stephen King
This post-apocalypse novel is the stuff of nightmares. Don’t watch the mini-series, which didn’t capture the horror and terror of King at his best. Ohmigod, on that rat prison scene. Even now I have nightmares over that scene!
What are some of your favorite horror novels?

Originally posted at http://lachesispublishing.com/?p=5439
Posted by Kim Baccellia at 12:01 AM No comments: