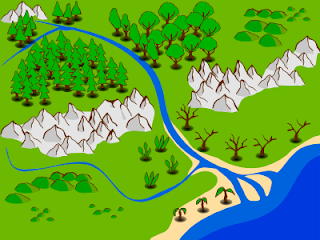 It's been a year since my last blog post about Worldbuilding, so it's probably time to update some of the resources I use. At MarsCon 2018, I was on the "Resources for Speculative Fiction Writers" panel along with S.N. Arly, Naomi Kritzer, and Ozgur K. Sahin. S.N. Arly compiled all the websites we shared into several posts on her tumblr. Links cover not only worldbuilding, but clothing, names (actual as well as generated), science, and highlights from the panel discussion.

Rather than going over everything on the list, I'll just say, check it out and make a note of it (I've put a link to it on my own writing aids website) for later use. There are a number of valuable links there.

Societies, of course, also have their own sets of manners and fashion, both of which, again, are dependent upon elements such as technology, resources, religion, and environment.

Martha Wells has a writing guide page that has diversity suggestion links as well as basics on submitting and promotion.

For middle school and high school beginning writers, Jeffrey A. Carver has "Writing Science Fiction and Fantasy", a step by step website with examples on worldbuilding.

I've found Technovelgy useful not only as a place to check when certain technology appeared in science fiction (1898 for asteroid mining, btw), but also as a gathering spot for recent technology news and inspiration.

What resources have you found useful? Any links to add?

BUILDING A WRITING ROUTINE
As an educator, it’s been drilled into me to have schedules and goals. Even then, I’ve personally found that I need to have a plan whenever I start a new writing project. Otherwise, nothing gets done! Here’s some things that have worked for me.

We’ve all heard this one.  That in order to be an author, you have to be willing to write every day.

Well, I have a confession. I don’t write on the weekends. I do write during the weekdays though. One of my author friends shared something that works for her. Carry a spare notebook with you. Whenever you have a spare moment, pull that notebook out and write. It doesn’t have to be much, but it’s something. You can use a notes app on your cell phone too.
Make a small goal. Maybe write an hour. Or more. Start small and build from there.

My husband works from home which means it can be really hard to concentrate and write. I ended up taking over the guest room and made it into my writing office. I also write at the coffee house. I take ear bubs and listen to a Playlist I created for my book and write.
My favorite coffee house has to be Coffee Bean & Tea Leaf which just happens to have the most amazing ice tea lattes. 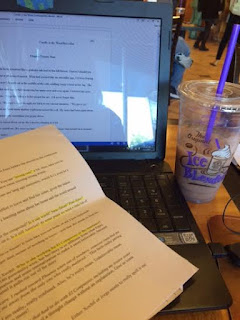 I happen to be a Plotter. I use a story map to plot out my stories. In my writing office, I have this huge whiteboard. I got this one at Costco. I have different color markers which I use for each different POV. 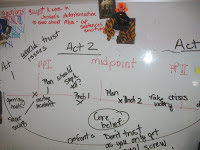 I think it’s important to read. I never understood those writers who say they don’t read. I read books that help with setting. I read for inspiration.  I also read books outside my comfort zone. Right now I’m reading lots of romances and books that deal with WWII women resistance fighters.

This one is huge. I try to not let someone guilt trip me into thinking that my writing time isn’t important. It’s okay to say ‘no’. Really, it is.

This happens to the best of us! I totally believe in getting up and walking or doing some physical activity. For me, I power walk or go to a movie. Or to watch Netflix shows. It’s okay to take a break now and then. Some of my best writing came when I did this. And sometimes, I just write to get through it.

The big thing is to find out what works for you!

Check out my other guest posts and reviews this week over on: http://blogtours.yareads.com/2018/01/02/blog-tour-sign-ups-crossed-fire-book-2-crossed-series-kim-baccellia/

Watch Me Pull a Rabbit Out of My Hat 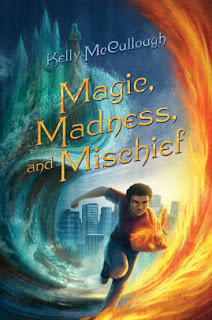 Magic, Madness, and Mischief is an attempt to mince my childhood fine, add in some magic and an actual plot, and serve the result up for your entertainment. This book isn't autobiographical, but it draws on my experiences in ways that none of my previous books ever have. I'm not sure what made me decide it would be a good idea to try to write a fast, funny, fantasy novel about growing up in a house with a parent with serious mental health issues and going to an Open School, but I'm glad that I did.

I think it started with the first line of one of my bios: Kelly McCullough was raised and educated by free range hippies. Over the years a lot of people have asked me about how that worked, and to some extent this book is my answer. It was weird. Really, really weird, and occasionally magical. I wanted to try to capture some of that with this story about the oh-so-subtly named, Kalvan Munroe. I gave Kalvan some things that I had; a mentally ill parent, a hippie school, a gift for getting into trouble, and a sharp tongue. I also gave him some things I didn't; a snarky magical hare for a sidekick, elemental powers, and very real enemies who would quite happily murder him.

The book kicks off with the start of a new school year and the first stirrings of Kalvan's fire magic. Not long after that he accidentally summons the world's most sarcastic fire hare and they head off for wild adventures like skipping class, hanging around with selkies, and nearly being devoured by giant anthropomorphic badgers. Figuring out which of those things I have the most experience with will be an exercise left to the reader. Hint, it's the badgers. Those things were the bane of my existence as a kid. But, you probably know how it is.

Okay, so maybe not, but, hopefully that gives you a bit of the flavor of the thing. It's a book about being an outsider and how to have a happy childhood in the face of challenges both mundane and esoteric. It's about learning how to be kind and strong even when you're angry and confused and loving your family even on the days you don't particularly like them.

All of which might come off as kind of heavy for a middle grade adventure novel, if my family motto weren't: that which doesn't kill us makes for the best jokes. Since family rule one is: don't die, that makes for lots of material. Rule two is: don't walk in front of the cannon. You probably won't need to worry about it for purposes of reading this book, but, if the opportunity comes up, it's still a good thing to remember.

To bring this essay to its somewhat surreal, but still terribly on-point ending, if you like Magic, find Madness interesting, and enjoy Mischief, this might just be the book you've been looking for. If none of that is true, you should still probably buy a copy and read it simply because it's a fast fun romp through a world a few degrees off from our own.

More information on Kelly and his work can be found at kellymccullough.com. His books can be found at many bookstores and ordered pretty much anywhere. Amazon, Barnes and Noble, Uncle Hugo's (can usually get signed books), Indiebound.

Bio: Kelly McCullough was raised and educated by free-range hippies. Later he received a degree in theater and worked in improv. That combination was the perfect preparation for his current career as author and cat herder. He is the author of more than a dozen novels including School for Sidekicks and the adult fantasy series Webmage and Fallen Blade. His short fiction has appeared in numerous magazines and anthologies. His microfiction series DragonDiaries and Badnoir can be found on his webpage or by following him on Twitter or Facebook. He also does a fair bit of silly performance art which can be found at: https://kellymccullough.com/shenanigans/

Author at a Career Fair

I've been asked to be the designated author at a Career Fair in February. Students wanted an author as one of the choices.

So, of course, I'm doing research beforehand. This Career Fair will only be two hours, so already I see I don't have to do the elaborate presentation that an all-day event would supposedly need. I checked with the person who contacted me if I could bring some of my books and awards as examples and got the okay on that.

So what else will I have? Not a banner - I still haven't invested in one because I'm still waiting on the re-releases of books with new covers. Books to display (both my own and how to write), check. Awards, check. Promo bookmarks for my books and short stories in case anyone wants one, check. Business cards in case they might have questions later and wish to contact me, check.

What else would I need? It sounds like students will be able to wander from table to table and ask questions, so I don't need to have a lengthy presentation. How to prepare for what questions might be asked during those two hours?

Before I retired from my day job as a university librarian, one of the classes I used to talk to about doing research was a Counselor Education class on, luckily, Career Education. I set up a website that the class could use to find out information about occupations. So I know some of the information that that class used to have to find. This Career Fair will be held at the Senior High School, so I'll probably get a mixture of very general questions and perhaps more specialized ones.

Basic questions students need to find out about an occupation: what do you do, what are the requirements, what's a normal salary, what's the job outlook. Answers can be found in the Occupational Outlook Handbook, though the entry for Writers and Authors has some interesting responses. So far I only know I'll have a table, so I'll have a printout of that entry I can refer to in case I get those basic questions.

As a small press author, I found the salary in the entry rather optimistic. But I'll also have a printout of Jim Hines' 2017 Writing Income blog post, so a more traditionally published author will be represented. And, since not everyone is J.K. Rowling or James Patterson, the importance of a day job needs to be mentioned. Though when I decided to be a writer at age 14, I was convinced I would only need a day job until I became an established writer. So I expect to be ignored about that. But it will be mentioned.

I'm published with a few small presses, so I can definitely talk about my experiences with those. I know a very little bit about self-publishing, as I have a couple of short stories published that way on Amazon Kindle.

For other questions, I have a handout of websites about writing science fiction and fantasy, lists of useful books, markets, and such that interested students can take. Some of the websites are listed on my Interests webpage under "Writing Aids".

Have you presented at a Career Fair? What types of questions did you get? What would you have liked to have known?