All good things end eventually. At the beginning of this month, Amber Quill Press announced that it would be closing down March 31, 2016. I have three books and three short stories with this publisher, and after March I will be looking to find a home for them with another publisher.

I've been with Amber Quill since 2003. They've always been a class act - great editors, beautiful cover art, regular quarterly royalty statements and payments, and creative promotional efforts. Their short story line gave me an opportunity with three of my shorts. One of those, "Search and Rescue", is currently a finalist in the EPIC Ebook Awards in the Short Works category. And its cover artist, Trace Edward Zaber, is a finalist for EPIC's Ariana Award in the Fantasy/Paranormal category.

This isn't the first time something publishing-related has ended for me. Over the years I've had a magazine close before an accepted short story of mine was published, and I've also had two other different publishers drop an anthology line, which meant three anthologies that I had short stories in went out of print. But I have short stories in anthologies with other publishers, as well as a picture book, and I'm currently working on a middle grade science fiction book.

In the meantime, though (for anyone interested), The Crystal Throne, Agents and Adepts, Talking to Trees, "Oracle of Cilens", and "Search and Rescue" will still be available through March 30, 2016 at Amber Quill Press, Amazon and B&N. The free short story, "Hiding in Plain Sight", is only available at Amber Quill Press until then. I'll have paper copies of the three books with me at conventions until I run out of stock. But the e-versions will be gone after March. (Amber Quill has the e-versions of the books on sale at their website, btw). If anyone wants a quick link to these (or a link to keep track of where these might end up), my book and short story page will always list them.

Amber Quill Press has been a wonderful publisher and I will greatly miss the creative, encouraging and supportive people who have made it such a great press.

I'm so excited today to share my latest news with you. CHICKEN SOUP FOR THE SOUL, MY VERY GOOD, VERY BAD CAT will be out February 9, 2016. Look what came to my house last week. 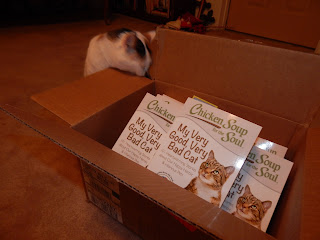 Patches is looking them over. I hope she's not disappointed she's not in the book. 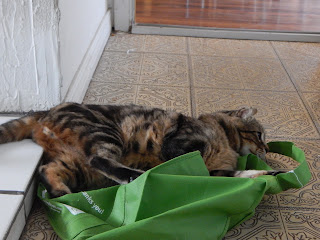 Tiger's not interested in being a star. He'd rather play with the grocery sack.
Have you done anything new this year that you weren't sure how it would turn out? If so, how was it?
Are you glad you did it?
This year I've been brave and tried something new. I received a phone call asking if I'd be interested in doing a Podcast about my cat that's in the book. I wasn't even sure what a Podcast was (I know, I'm way behind in the technology field) but I thought it might be fun, so I said yes. A few days later, the phone rang and I talked about my cat to the President and CEO of the American Humane Association, who wrote a forward for the book. She was so nice and I really enjoyed talking with her. Now, I'm wondering how I'll sound on the interview. She interviewed a couple other authors in the anthology too. The show will be edited, so maybe I won't sound too bad. 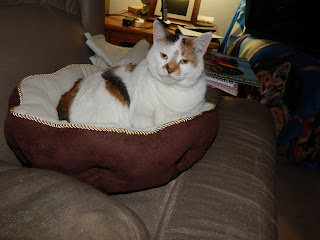 When Patches discovered she wasn't in the book, she decided to take a nap.
The cats say "Happy Reading!"
Posted by Beverly Stowe McClure at 5:00 AM 2 comments:

I decided against posting a whole 2015 reflections post as it didn't start off too well with the death of my beloved cockatiel Jenny. 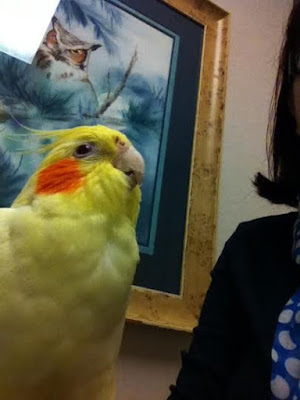 Plus, it's been REALLY HARD homeschooling this school year.  Son wants to attend public high school next year and I'm burnt out.  It's been hard juggling writing and teaching ninth grade.  Plus, I know I've been 'comfortable' with where my writing is and want to get out there again.


When son's in school I plan to concentrate more on writing and querying again.  My goal is to query for an agent as I want to bump my writing career up a level and get my books out to a bigger audience.  My big dream has been to have my books at ALA/BEA and being able to do book signings.  Where I'm at now?  That won't happen.  I need to work a little harder to get to my goals.  I know if I do?  I'll achieve them!

So here's my goals:

1. Polishing off my ongoing diverse thriller/romance and start querying for an agent.
**Don't settle for just any offer.  Learn from the rejections guaranteed to come and query again.
2. Finish the next round of edits on GODDESSES CAN WAIT
3. Start edits on the sequel to CROSSED OUT
4. Say 'no' more and concentrate on my career which has taken a backseat for these past seven years I've been homeschooling
5. I'd really like to volunteer at least once a week in the community.
6. Visit Mom and family more in Sacramento area.
7. Be kind to myself and don't buy into any of the passive aggressive crap that has been thrown my way.

What are some of your own goals?
Posted by Kim Baccellia at 8:12 PM 2 comments:

Today, January 1, 2016, BBC will air the Sherlock New Years Day Special. PBS will also air it as part of Masterpiece (check local listings - I have two nearby PBS stations and each one has a different time). I've been looking forward to this. Even though the BBC Sherlock is set in modern-day, this particular special ("Sherlock: The Abominable Bride") will be set (or appears to be set) in Victorian days, one that many Sherlock Holmes fans are familiar with from the books. It will be interesting to see how the characters react or not react to this setting. Will Mrs. Hudson still say, "Not your housekeeper."? Will John and Mary already be married in this version? Will we see another version of how the characters met? This trailer seems to hint so.

I've always been a fan of Sherlock Holmes. I don't remember which came first - if it was watching the Basil Rathbone movies on television, or reading Arthur Conan Doyle's stories. I was enough of a fan, though, that I received the 2 volume Annotated Sherlock Holmes as a Christmas present when I was in eighth grade.

My friend Barbara Warne created and maintains the Sherlock Guide. She has links not only to the current show, but to an episode guide for Elementary, news about conventions and what the showrunners said at those conventions, links to the episodes of the Russian Sherlock Holmes show (in the news section in 2014) and many other items of interest to Sherlock Holmes fans. Even a video of Arthur Conan Doyle.

There have been many versions of the detective and everyone has their favorite. Some are fans of the Sherlock as portrayed by Jeremy Brett, while others may only know one of the many film adaptations. Basil Rathbone was not the only actor to portray the consulting detective in films, nor Robert Downey Jr. Anyone remember when Christopher Lee played the role? Or when Margaret Colin was a Watson? (no, Elementary was not the first with a gender switch). I still have fond memories of Sherlock Holmes and Doctor Watson, a Polish-British production which was shown on A&E back in the 1980s. But not fond enough to find my video tapes of the show and see if it still holds up.

New Years Day for some might be for recovering from parties. That day for me is usually my day to start getting my paperwork in order for taxes. My reward this year will be a new Sherlock on my local PBS. I'm looking forward to see how this Sherlock and Watson will do in this classic of all time periods. I loved the interaction between the characters in the very first trailer.

Who has been your favorite Sherlock? Favorite Watson?