BOOKS AND STOCKINGS AND HATS AND CATS

I'm cross posting this from my other blog at https://beverlystowemcclure.blogspot.com

Now that Thanksgiving is over and we survived the crazy shoppers and we've had our naps, it's time to start thinking about, yes, you got it, Christmas.


How about a hatful of books for the young readers you know. 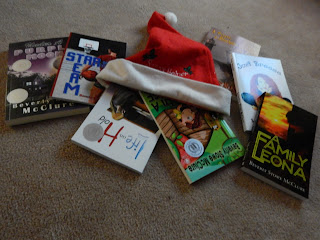 Or maybe a stocking full for those cold snowy days to keep the kids entertained. 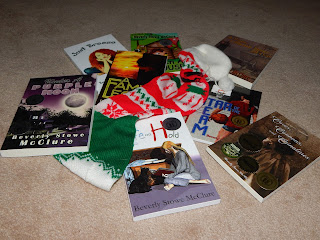 For more
Visit me at AMAZON  BARNES  & NOBLE
and see what you like. Books make great gifts for older readers too.
Or, if you'd like a signed paperback of any of my books email me at Beverlysmcclure (at) aol (dot) com. Free shipping too, my gift to you.
Now I'll stop advertising. I think all the ads I read this past weekend have gone to my head.
It's taken awhile to write this because Tiger keeps interrupting me to play ball. Then Patches gets jealous and gives him her look that says she's gonna get him when he's not looking. Cats are so sweet. 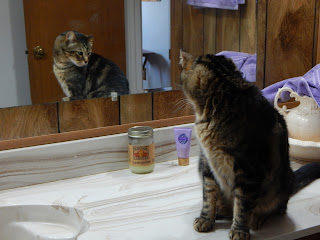 Tiger wants to know who that kitty in the mirror is. 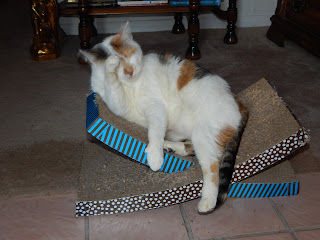 Doesn't Patches look like a terror? She does pick on Tiger.
She pretends like she just wants to sleep.
Happy Reading to You All!
﻿
Posted by Beverly Stowe McClure at 5:00 AM 1 comment:

A guest post by my friend Tammy Garrison about her new YA book:

As a kid, I picked up a hefty volume called The Boy’s Sherlock Holmes from a grade school that was closing, and was liquidating its library. It looked like something I would be interested in, despite being obviously labeled as being ‘for boys.’ But that was the way of most things I liked; Batman, Star Wars, hockey, you name it. I know now that this was not my experience alone, that girls and women felt alienated from geek culture, and before the Internet, there wasn’t an easy way for a teen of limited means to meet up with like minds.

I didn’t pick up this book just because it was ‘for boys.’ I had a genuine interest. I’d spent my fair share of Sundays watching old Rathbone movies, not to mention various cartoon incarnations of Sherlock Holmes that I had a fair idea of what I was getting myself into. But going back even further, my first and formative introduction to the world of Sherlock Holmes was a CBS movie of the week entitled The Return of Sherlock Holmes that aired when I was seven years old. It took place in the modern day, and Watson was a woman. It was an accessible gateway for a grade schooler who always had to be He-Man when we played after school.

The stories held my fickle attention from cover to cover, but there was really one thing missing from most of those tales: women. I was hardly a child feminist, in fact I had grown up in a confusing era where Barbie could be an astronaut, but women were still continually implied to be lesser than men, and the male experience to be superior to the things women were supposed to like and do and be.

Most girls just accepted that we’d never be Luke Skywalker, that regardless of how cool his lightsaber was, we’d be better off liking Princess Leia with her many hair and costume changes. I just barely managed to hold onto my dream of being Batman, regardless of my youthful crush on Tim Drake’s Robin, and the existence of Batgirl. I didn’t want to be the lesser spin-off character. I wanted to be The Main Guy. Since, y’know. Guys were more important than girls.

Everything comes back around again, and at a low point in my adult life, battling severe and debilitating mental health issues and the crushing self-esteem blow of unemployment, I sat down on a warm and sunny November 1st, at the start of National Novel Writing Month with only one goal in mind: to write the most self-soothing, self-serving thing I could possibly produce. If the world didn’t care about me, then I didn’t care about the world.

I decided to write not the story that I wanted to read, but the story that I had needed growing up, and still needed now: the story of a girl Sherlock Holmes, brilliant but alienated, surviving the ins and outs of high school with her best friend, a Watson who was athletic and smart, but maybe less noticeable than she thought she should be.

Over thirty days, I came up with a story that was exactly what I needed in high school to tell me that I was ok the way I was, that my interests weren’t wrong or weird and that, in fact, there is nothing lesser about girls and that they can do anything, even be self-involved detectives. It became a bit like shojo manga, but without the love interest, since one of my peeves is every young adult story needing to have some sort of romantic plot, preferably the dreaded triangle. It was all of the elements I wanted in a story involving one of my childhood heroes, and I was absolutely certain no one would ever read it.

It took me forever to edit it and get through two more drafts. Years, even. Due to this terrible fear that I was somehow wrong for writing it, and anyway, who would publish an alternate universe Sherlock Holmes story where Sherlock Holmes is a teenage girl in modern America?

Eventually you get sick of looking at a story. You want to murder it, or burn every copy and chastise yourself for ever wanting to write the thing. That is the point where you send it to others. After the usual rounds of reading, typo fixing and comments, I decided to pull the trigger and fire it off to MX Publishing, a house I was familiar with, due to the number of pastiches I had read over the years. Crazily enough, they also decided that shojo teenage Sherlock Holmes was something they wanted to add to their catalog.

And that, my friends, is how the story of an awkward girl who grew into an awkward adult who wrote the book she needed to read.

The Twisted Blackmailer: Watson & Holmes Book 1 is available directly from the publisher: http://www.mxpublishing.com/brand/Tammy+Garrison

Or from Amazon as a paperback and Kindle book: https://www.amazon.com/Twisted-Blackmailer-Watson-Holmes-Book/dp/1787050246

From the back of the book:

Nothing's ever easy when Sherlock Holmes is involved. Joanna Watson needs sports and academic scholarships if she is going to make it all the way to med school. That means keeping out of trouble, and her school record squeaky clean. But upon befriending the mysterious New Girl, Joanna has her perfect record ruined, skips school for the first time in her life, and finds a blackmailer aiming a gun in her direction. All she knows is that she's going to get grounded... if they get out of this alive.

Posted by Kathy Sullivan at 1:00 AM 3 comments: