A few announcements to start:

First, Detcon1 has created an award for YA and Middle Grade Speculative Fiction. Two awards will be given out. Anyone can nominate up to five titles. Only Detcon1 members (attending or supporting) will be able to vote on the final ballot, but if you’re not a member, you can still nominate. All nominations must be received by 11:59pm EST March 7th, so go nominate.

YA and Middle Grade works first published in 2013 are eligible. More details are available on the DetCon1 website .

Second, nestcam watch has begun. For those interested and keeping track, in the Midwest

For me, the best new news came Tuesday with the announcement that the Kepler space telescope had discovered over 700 new planets, over 100 of which are Earth-sized. (Full news article from Slate and Yahoo News). For a writer, this opens so many more possibilities once again.

Writing science fiction even just a few decades ago meant you had the option of creating your own planets and dreaming up names for them. No one could say that such a planet couldn't exist or that you had gotten your science “wrong”. But then the “hard science” crowd demanded more and more accuracy (not in itself a bad thing) and one got the impression that inventing planets (or stars) that didn't already exist was considered a bad thing.

For those who want to use what has been found, there are databases listing the new planets: the Open Exoplanet Catalogue, the Extrasolar Planets Encyclopaedia, the Exoplanets Catalog, the NASA Exoplanet Archive, and the Exoplanet Orbit Database. These already have the new planets listed and will continue to add any new discoveries.

But for those who want to create and name their own planets, the possibilities are there once again.

Read an E-Book Week is March 2nd through the 8th this year. Do you wonder how this event got started? Or perhaps you know. I had no idea, but I found this wonderful article at the Huffington Post that tells all about Rita Toews, the lady who came up with the idea. I think the article was written in a past year, but it still gives us the Story Behind “Read an E-Book Week.”


Another interesting article “How do E-Books Change the Reading Experience?” is found in the New York Times. Mohsin Hamid and Anna Holmes discuss how technology affects the way we read.

What’s your opinion? Do you enjoy reading E-Books, or do you prefer print books?

Print books, paperback or hardback, are still my favorites. There’s just something about curling up on the sofa or bed with a book in my hands and escaping into another time and place with delightful characters.

I also enjoy reading an E-Book on my iPad. The thing I like best about the E-Book is the fact they’re easier on my eyes than the print is. My vision is growing worse each day. I have cataracts, floaters, and I see flashes of light sometimes. The eReader is clearer because the print is larger and there is the lighted background.

Face Book has a page to join for Read an E-Book Week.

To get in the spirit of the week, I’m gifting a copy of one of my E-Books on Amazon to all that are interested. Your choice.

Put free E-Book in the subject line. Tell me which book you want and your email, and the book will be on its way.

Posted by Beverly Stowe McClure at 6:00 AM No comments: So it'a been a month since the big announcement about A CURSE OF ASH AND IRON. Now that the confetti has all been swept away and the balloons deflated, I'm in that limbo between acceptance and publication. Waiting for edits, waiting for a cover. Hurry up and wait. And also, do a whole bunch of stuff.

What am I doing now? Let's see, lining up appearances, getting things in order for when I DO have the cover (so that I can make promo stuff), and just basic pre-promotional craziness. Trying to line up a venue for the LAUNCH PARTY. I'm SO having one. A big one. With cake. And possibly glitter.

There's all this STUFF that has to be done, most of it through emails and twitter. Things I do know will happen is that the book will be on NetGalley. It will have a Goodreads giveaway. In addition to my regular yearly appearances, in July I AM going to CONvergence, a four day SF/F convention in Bloomington, MN, so that I can sign ARCs and meet more Strange Chemistry authors. I have never traveled so far for a con, but I've never had a publisher who would have ARC's for me to sign either.

I am also going to be at the Steampunk World's Fair in Piscataway, NJ, handing out promotional stuff. Exciting!

What's left? Making video blogs, and arranging blog tours and interviews, and all that other stuff. And working on the next book, of course.

I've done all this before, but this time it's different because this publisher is really bigger than any of the others I've worked with. They're not HUGE, but they have a marketing person (who I've met, he's awesome), and a publicity person whose job it is to see the book and I get as much exposure as possible. The publisher has over 1,000 people subscribed to their newsletter. They use Random House to sell and distribute their books (and they can put books on store shelves). They will be sending the book to the BIG reviewers. No guarantees but at least it will get there.

I feel so much less stressed this time around. I'm still working my butt off, and will continue to do so. I mean, there's no BEA this year, no ALA booth. The publisher isn't doing those yet. But they're big enough that I feel I am on the path to something great. Oh, and this novel sale also qualifies me for PAL membership in SCBWI and SFWA. Which may not mean a lot to most of you, but it means LOADS to me.

Meanwhile, the book is up for pre-order on Amazon, and people have ALREADY bought it. Squee!!!
Posted by Christine Norris at 4:00 AM 5 comments:

Email ThisBlogThis!Share to TwitterShare to FacebookShare to Pinterest
Labels: a curse of ash and iron, christine norris, strange chemistry

The Glory and Agony of First Drafts

It's a bit of a complicated relationship.

I love being able to have the freedom to go wherever I want with a new story and a new idea. The characters aren't locked into set patterns yet. Anything is possible.

But when anything is possible sometimes it's hard to figure out which way to go, which direction to take the story.

And then, at least for me, I always get to a part in the story - maybe about a third of the way in, where I'm convinced it's the most horrible thing ever written and there really is no point in going on anymore.

Usually I manage to muddle through that part and get back to the fun of inventing new twists and turns. And it is fun to create like that. It's one of the things I love about writing.

I also love the refining part, where I take the rough first draft and turn it into something that I might actually want someone else to read.

Right now I'm working on one story in first draft and it's just a little past the part where I'm convinced it's the most awful thing ever. I've muddled through the rough patch.

I also will be doing final edits shortly, for the third Ali book - Honestly, Ali! I'm so excited to have another Ali book coming out. The fourth Ali book is still in first draft form, waiting for me to turn it into something fun and glamorous. So I've got stories in all phases. Life is good.

First drafts can be the most fun though.

But, sometimes I really hate them.

What is your favorite or least favorite part of writing? First draft, revision, plotting? And why?
Posted by christine M at 6:00 AM 1 comment:

Last weekend my daughter and I were at SciFi Expo!
I didn't see any of the stars (wah) but there were some really great costumes. And I probably only saw 10% of them. Here's a few I was able to take pictures of to share. 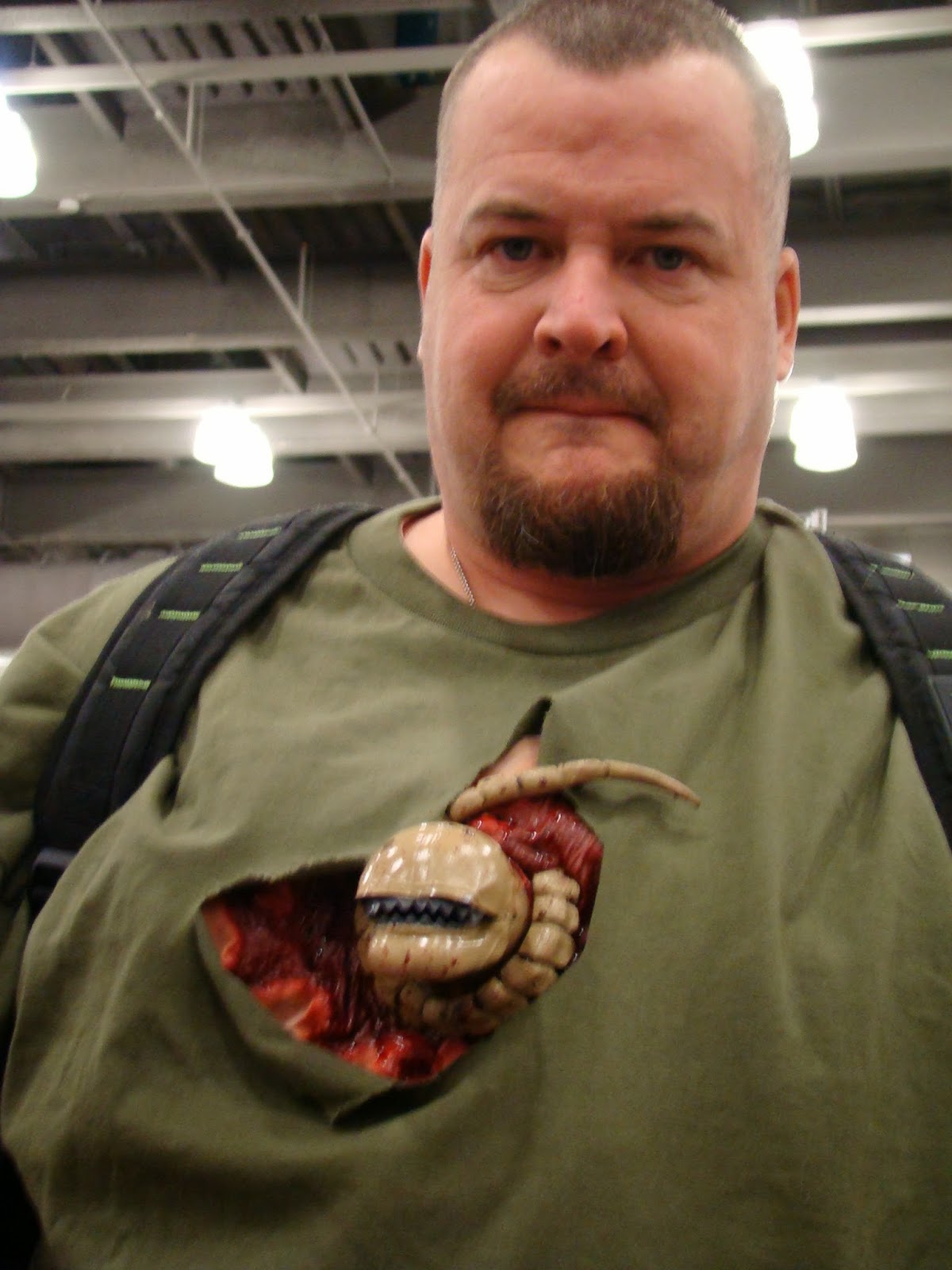 Isn't that cool? He made it himself. The alien looks hungry. 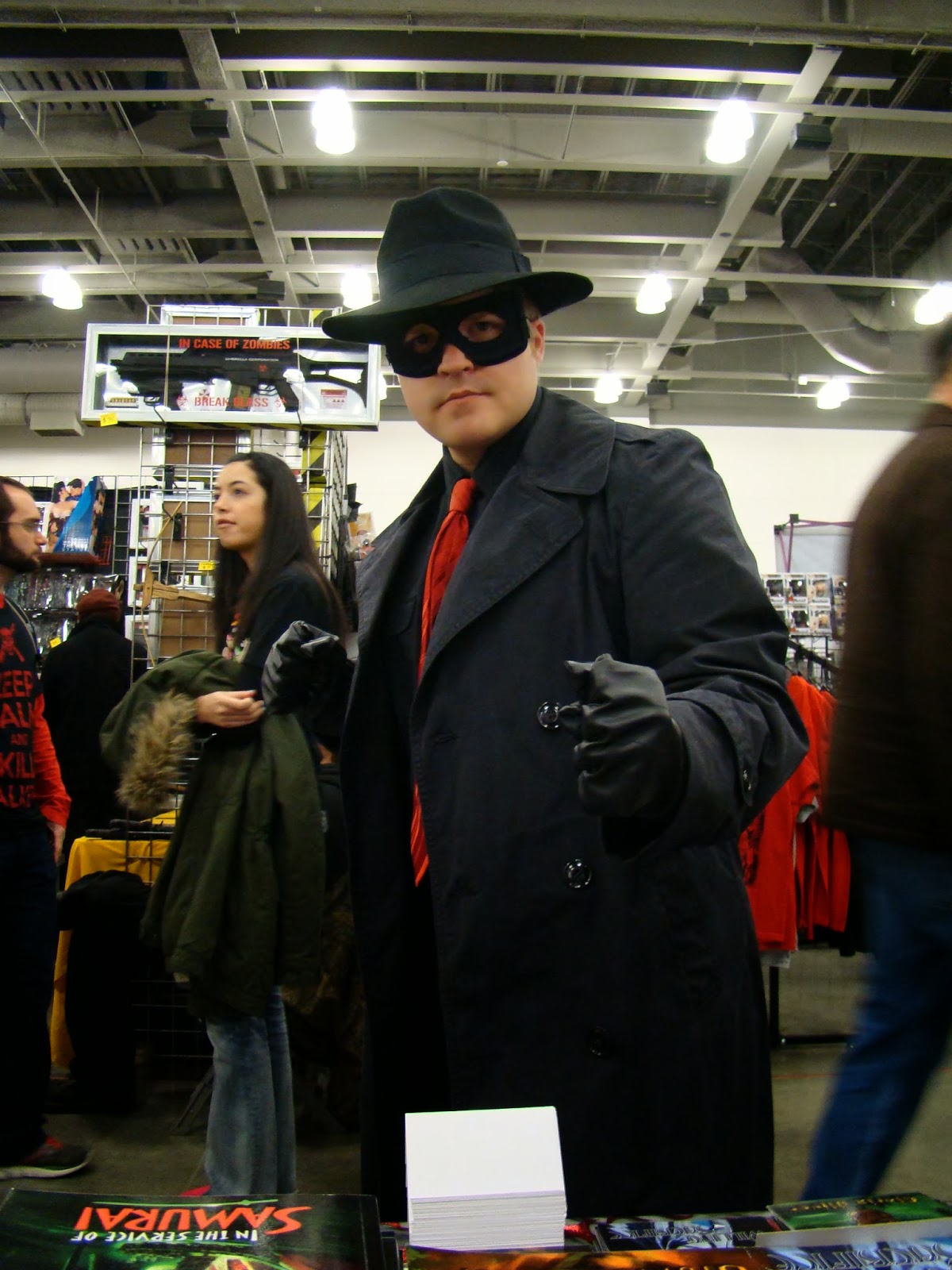 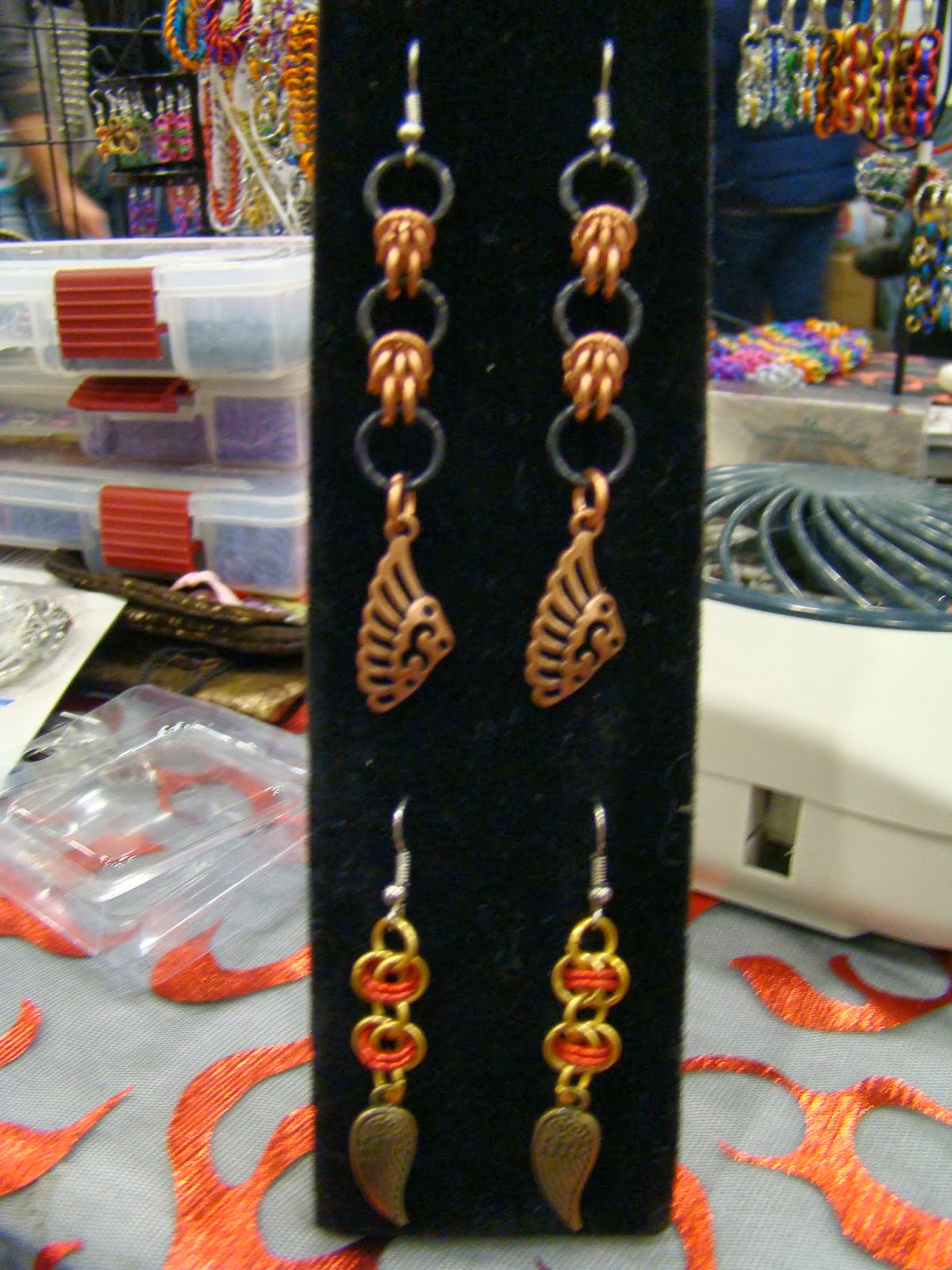 My daughter made several unique creations during the show. :) 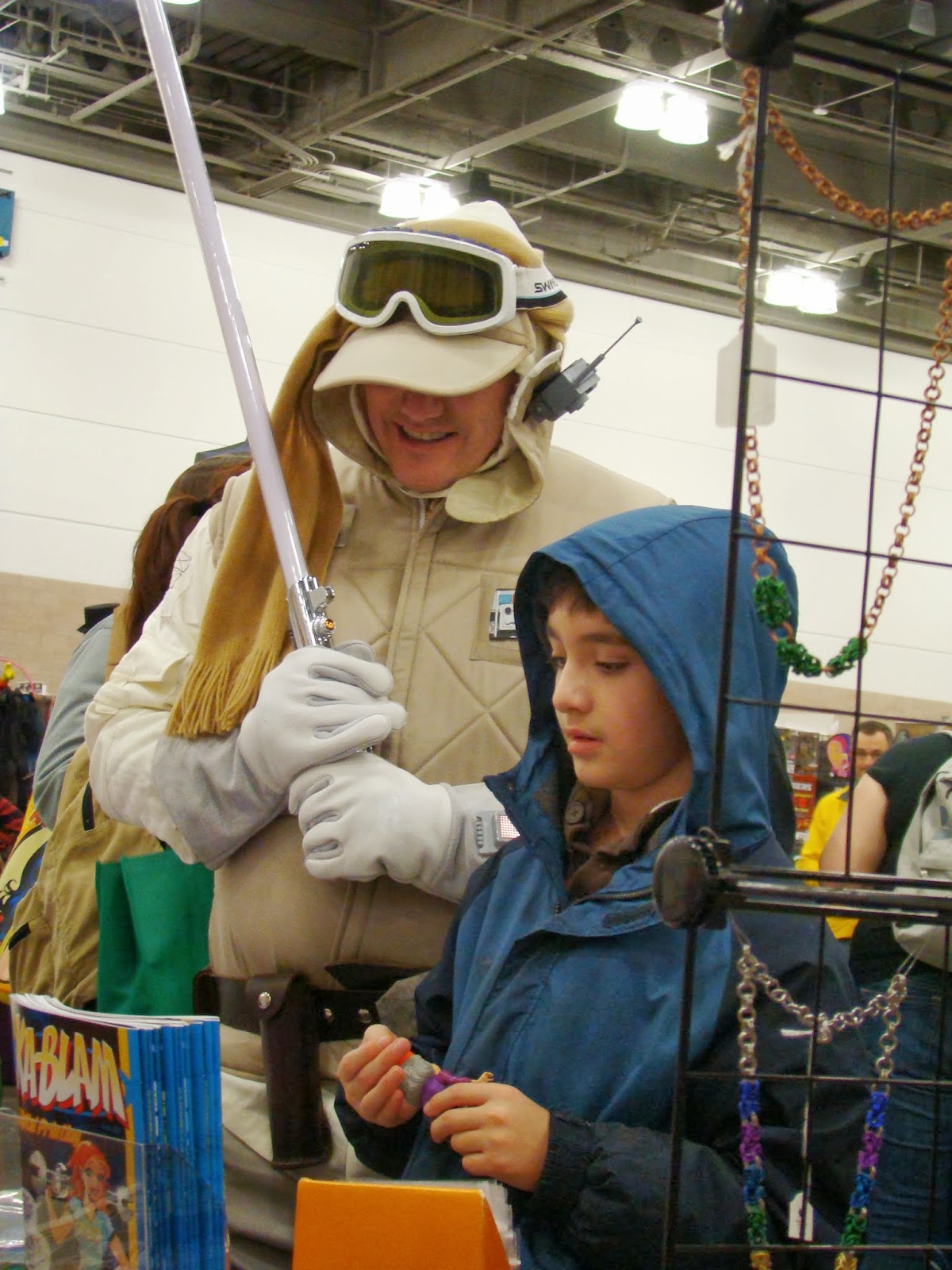 Luke was well dressed for the shindig. It was super cold outside and the inside stayed that way most of Saturday. Eek! 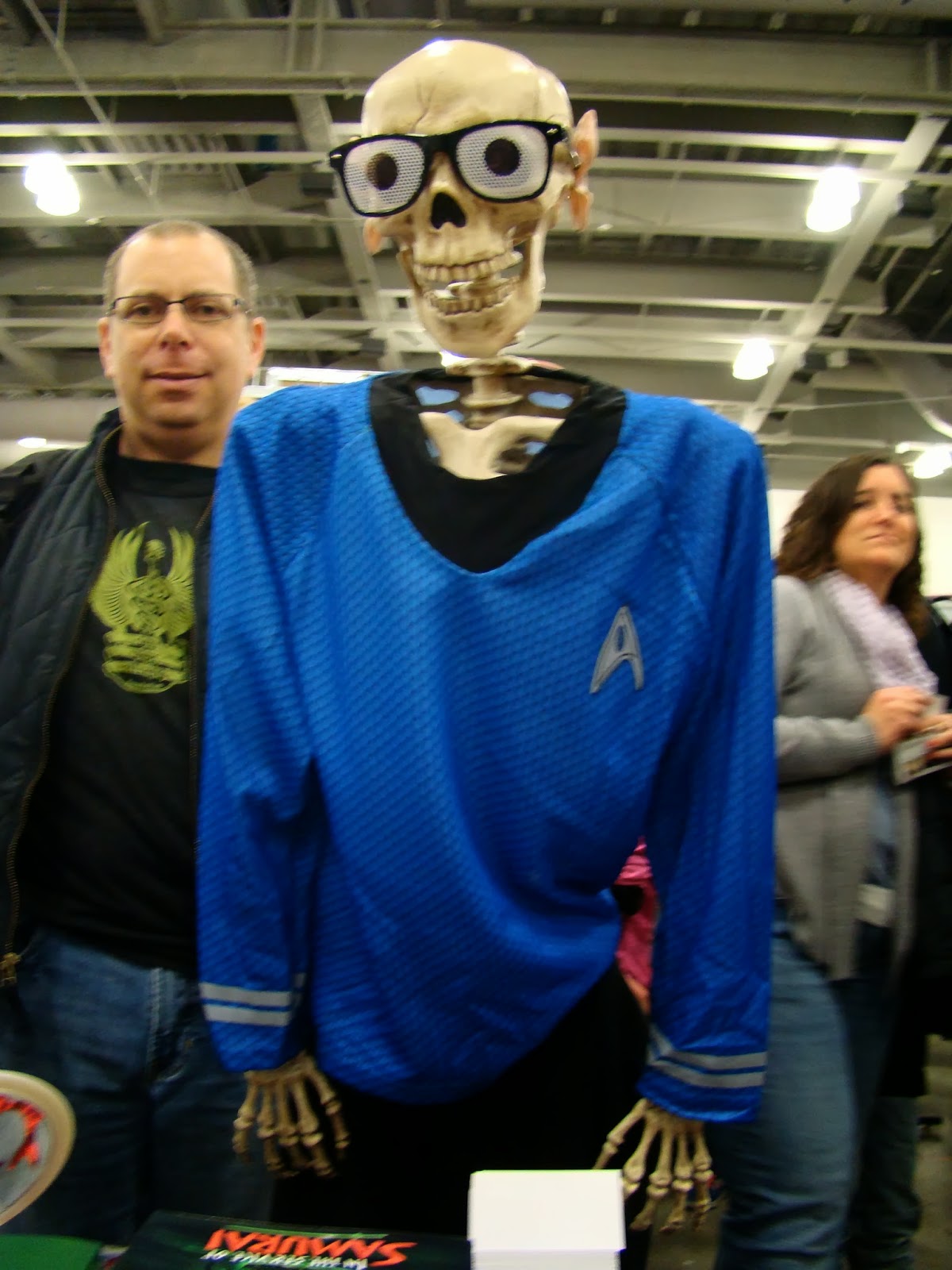 Dead Spock from DuggGraves. Even has the ears. Heh heh (Man, he's got an awesome pic with Karl Urban. I didn't even get to see, even from afar, Karl Urban! Doh!) 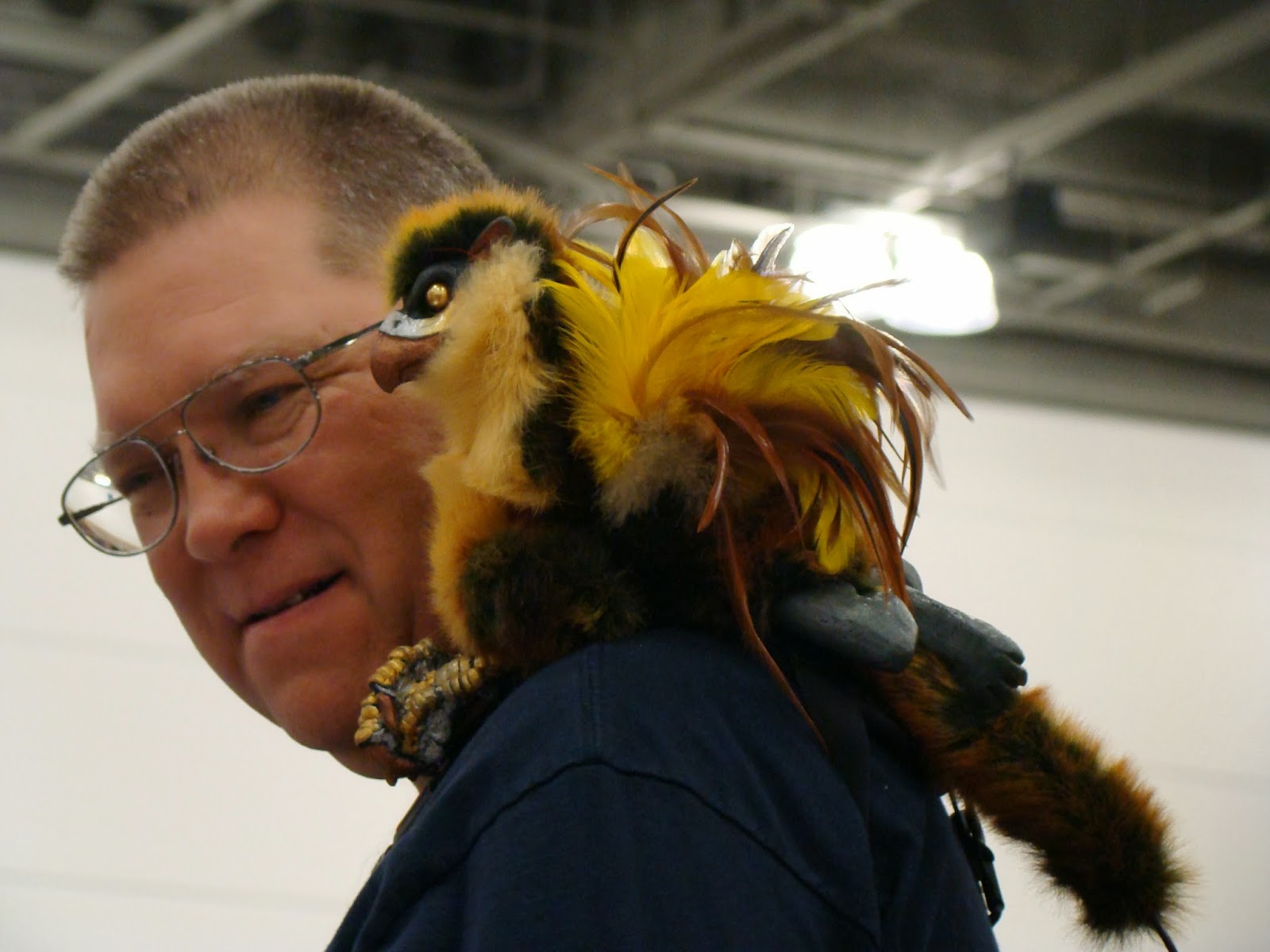 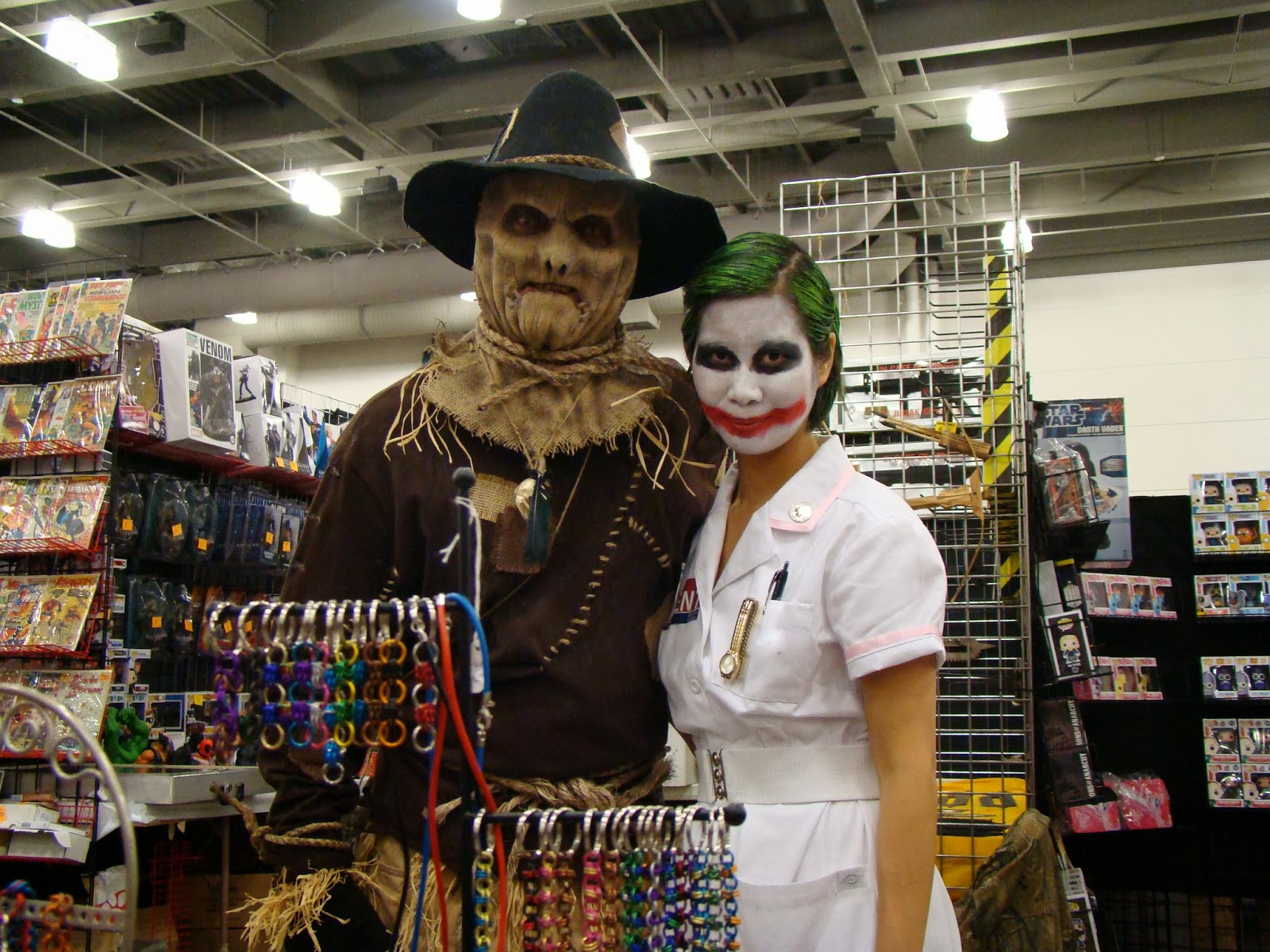 Scarecrow and the Joker. His mask was awesome! 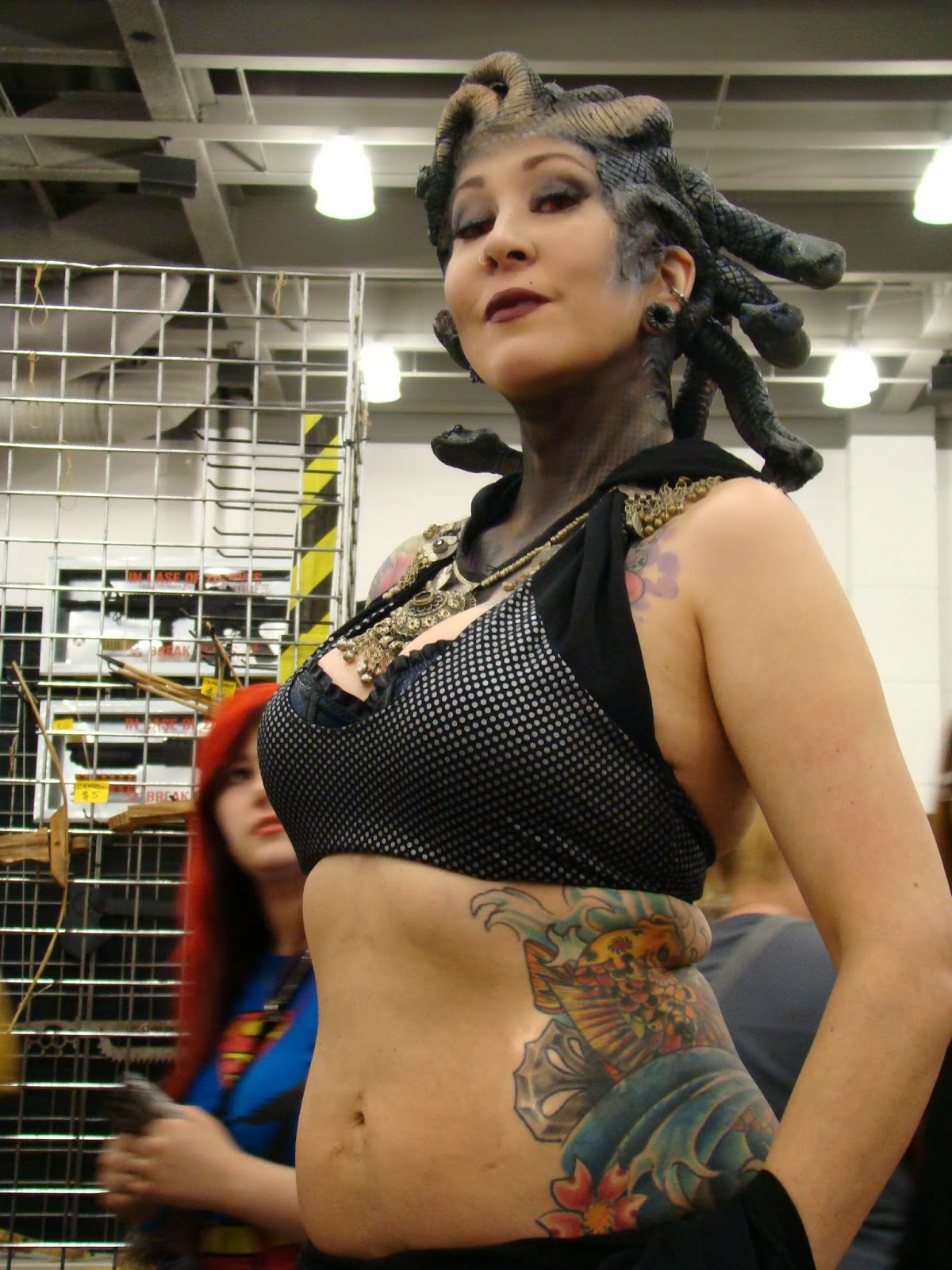 This one is fantastic too. And the attitude totally sold it. Medusa! 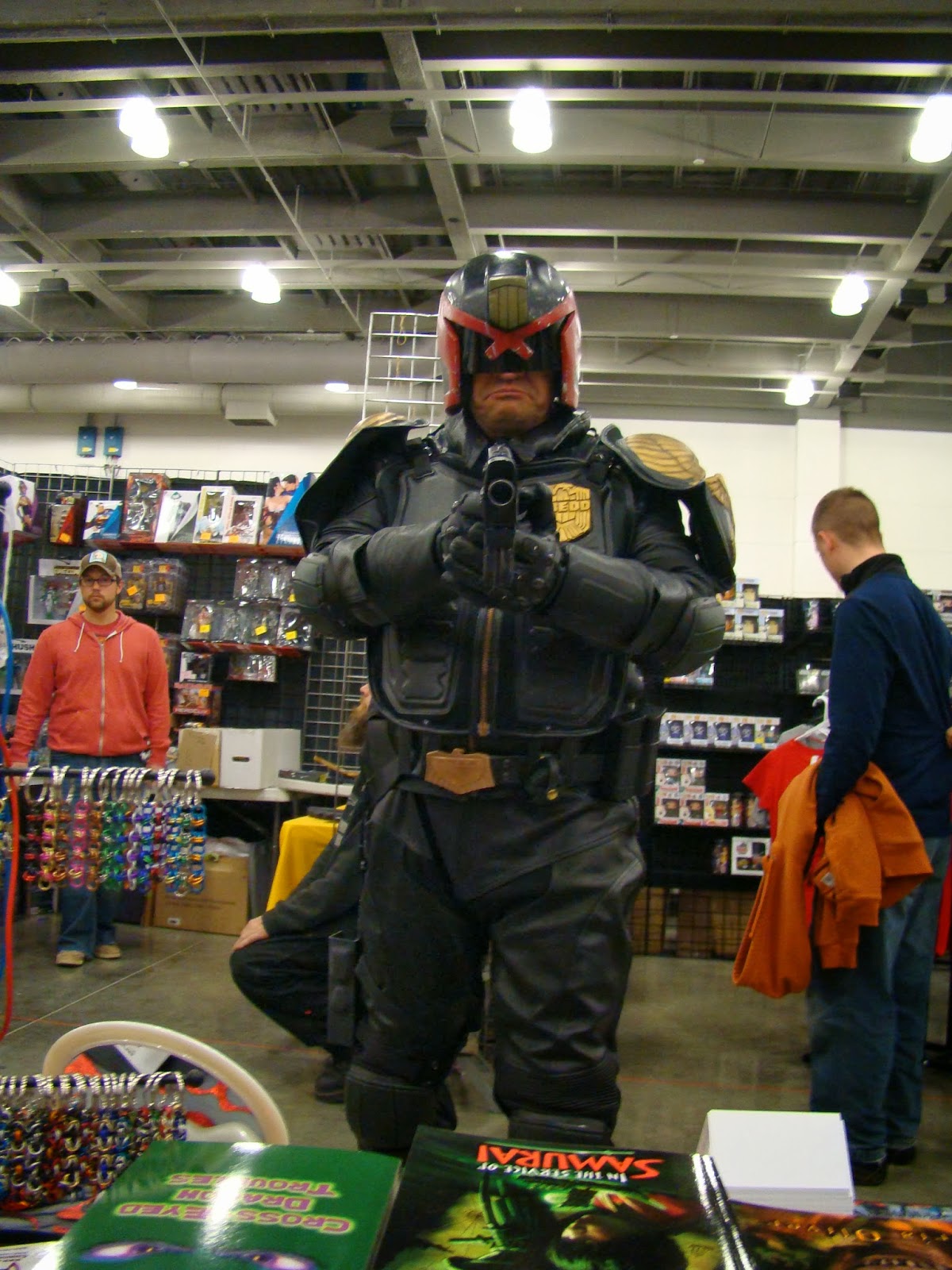 Judge Dredd is in the house! 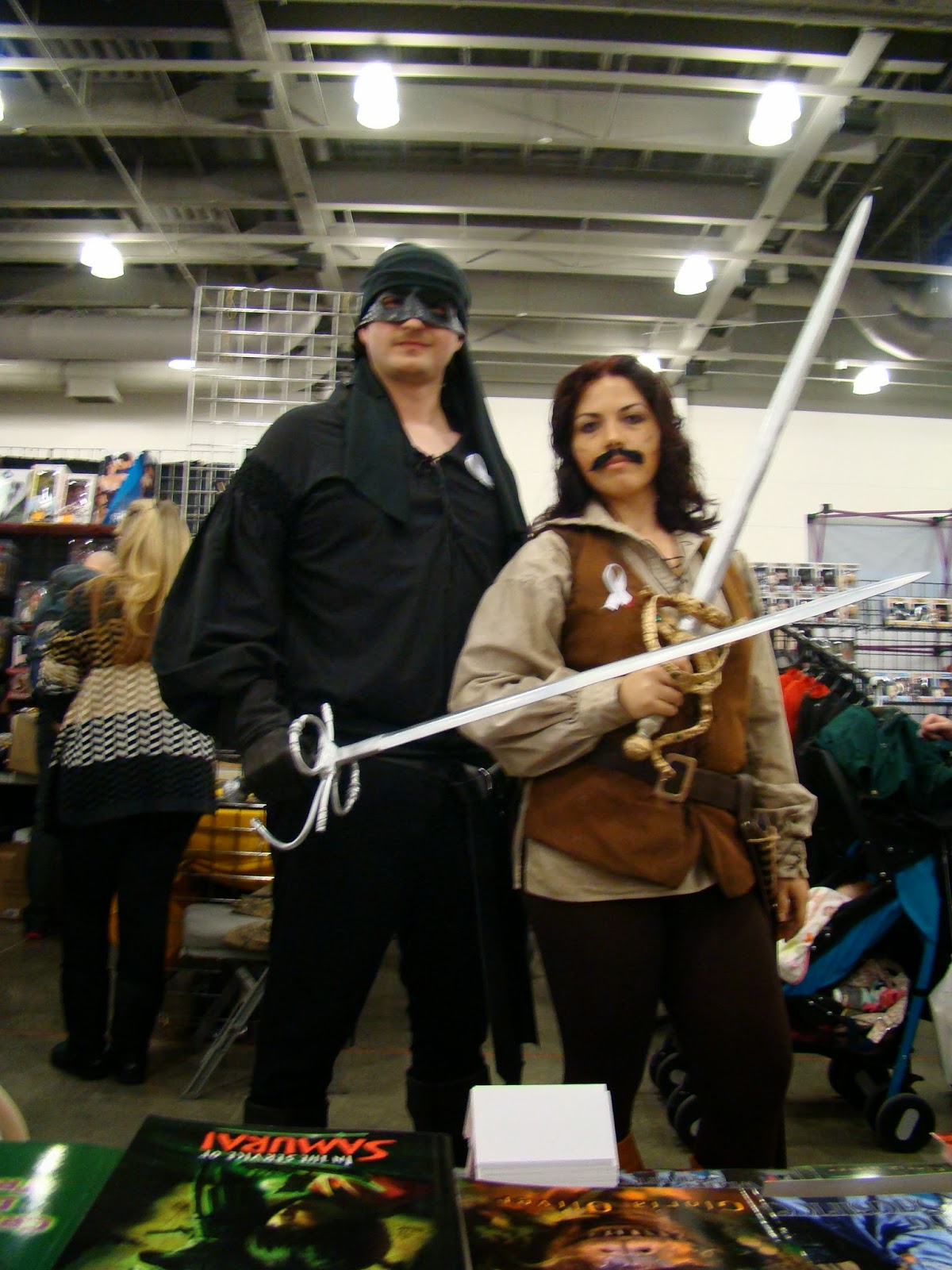 From the Princess Bride - the looked great! He even said "As you wish." But no threats from Indigo Montoya. Guess I didn't look like the guy who killed his father. Heh heh 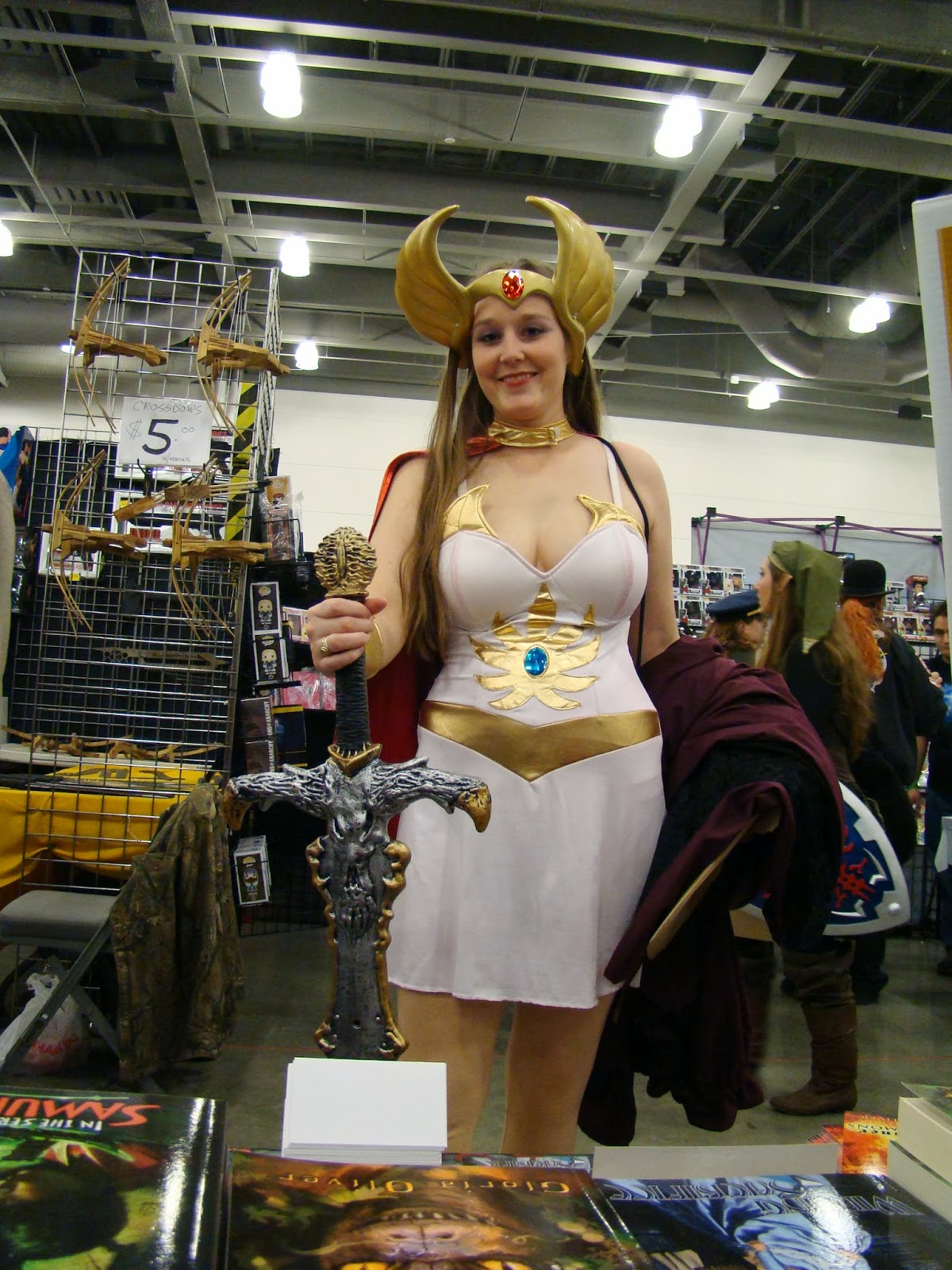 Super blast from the past - She-ra! 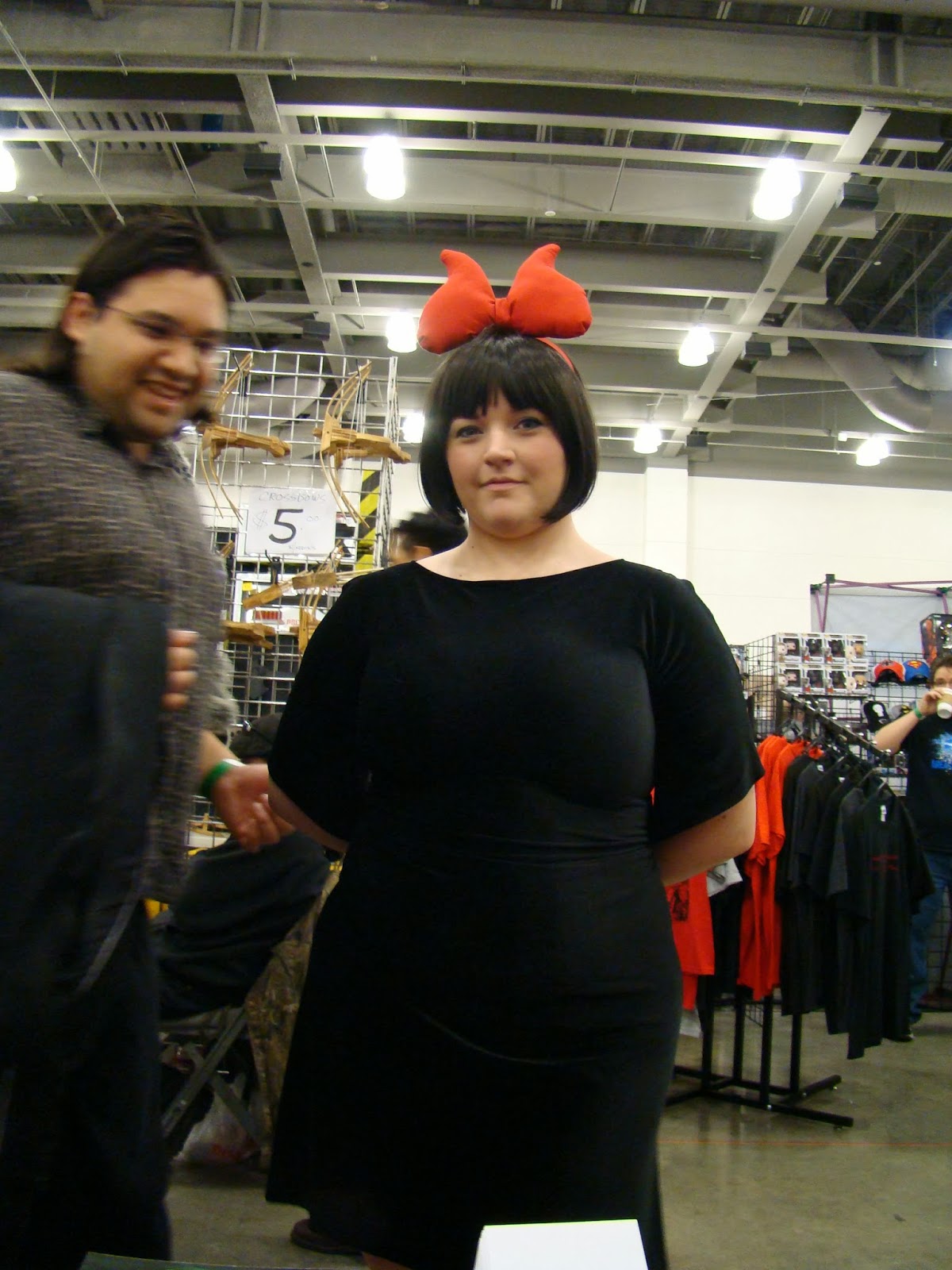 Kiki from Kiki's delivery service. I spotted her with a broom earlier too. 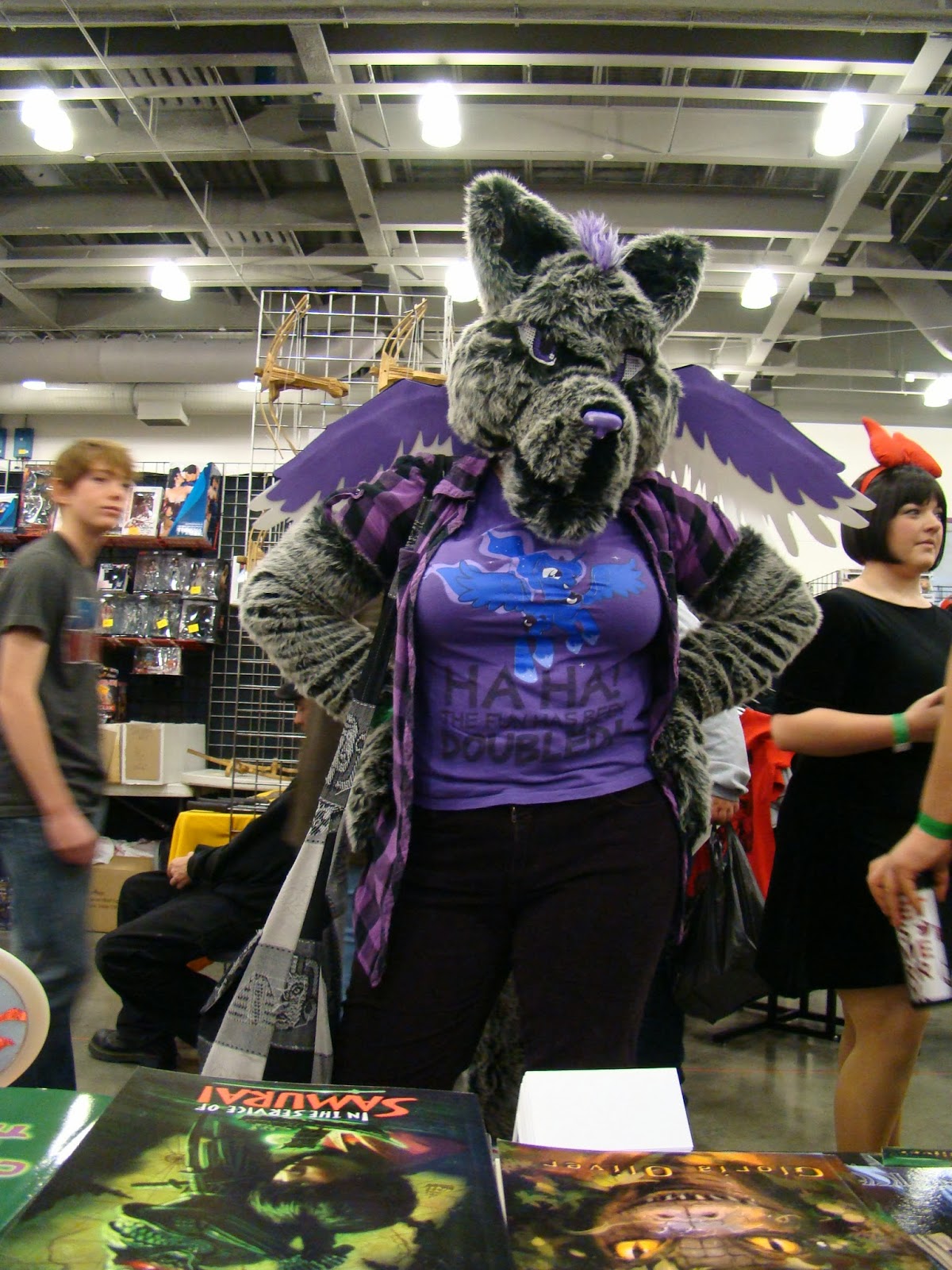 Best part of this costume was how she sold it with attitude. So cute! 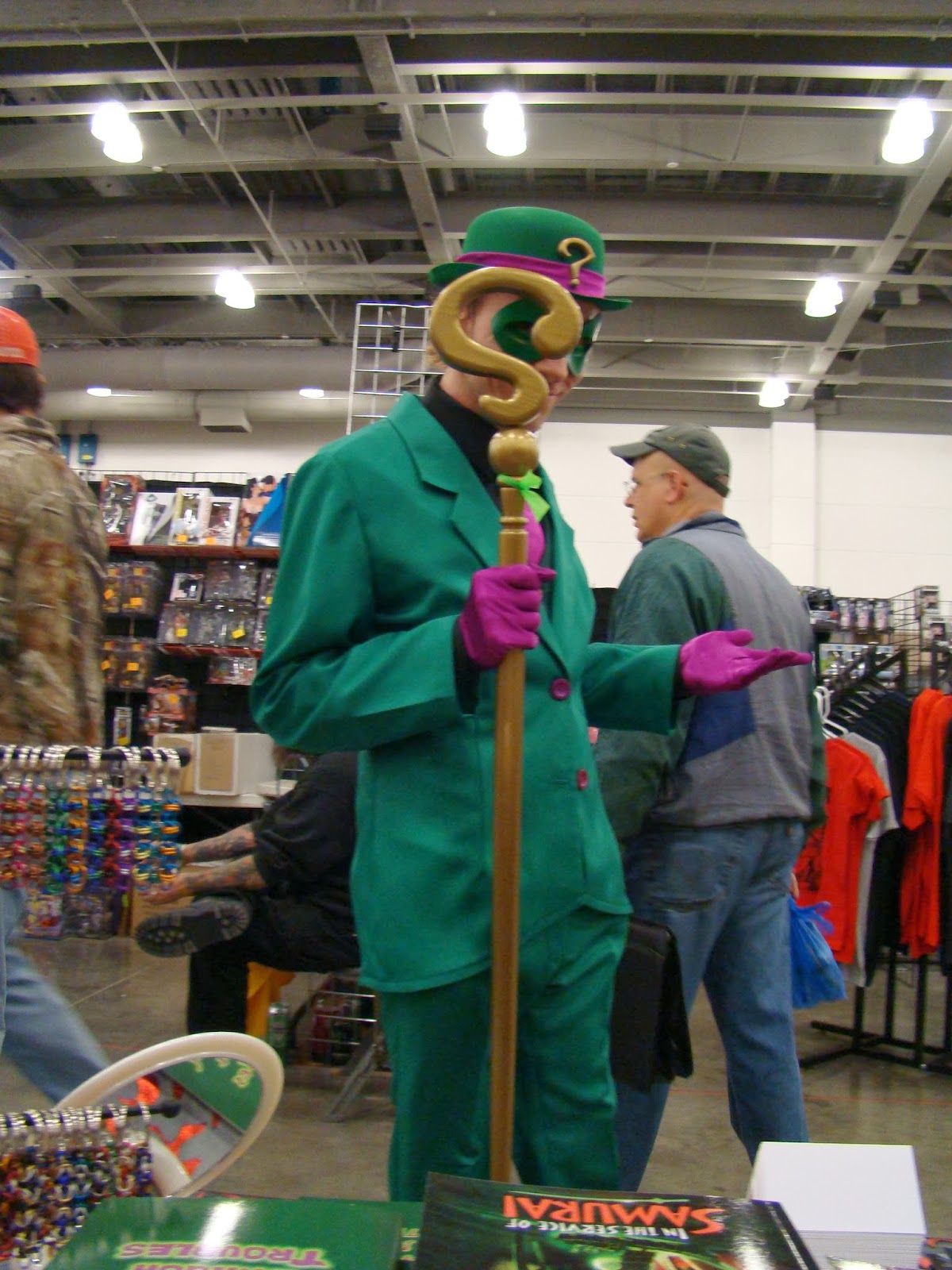 The Riddler - he was fabulous! Even hit us with a riddle. 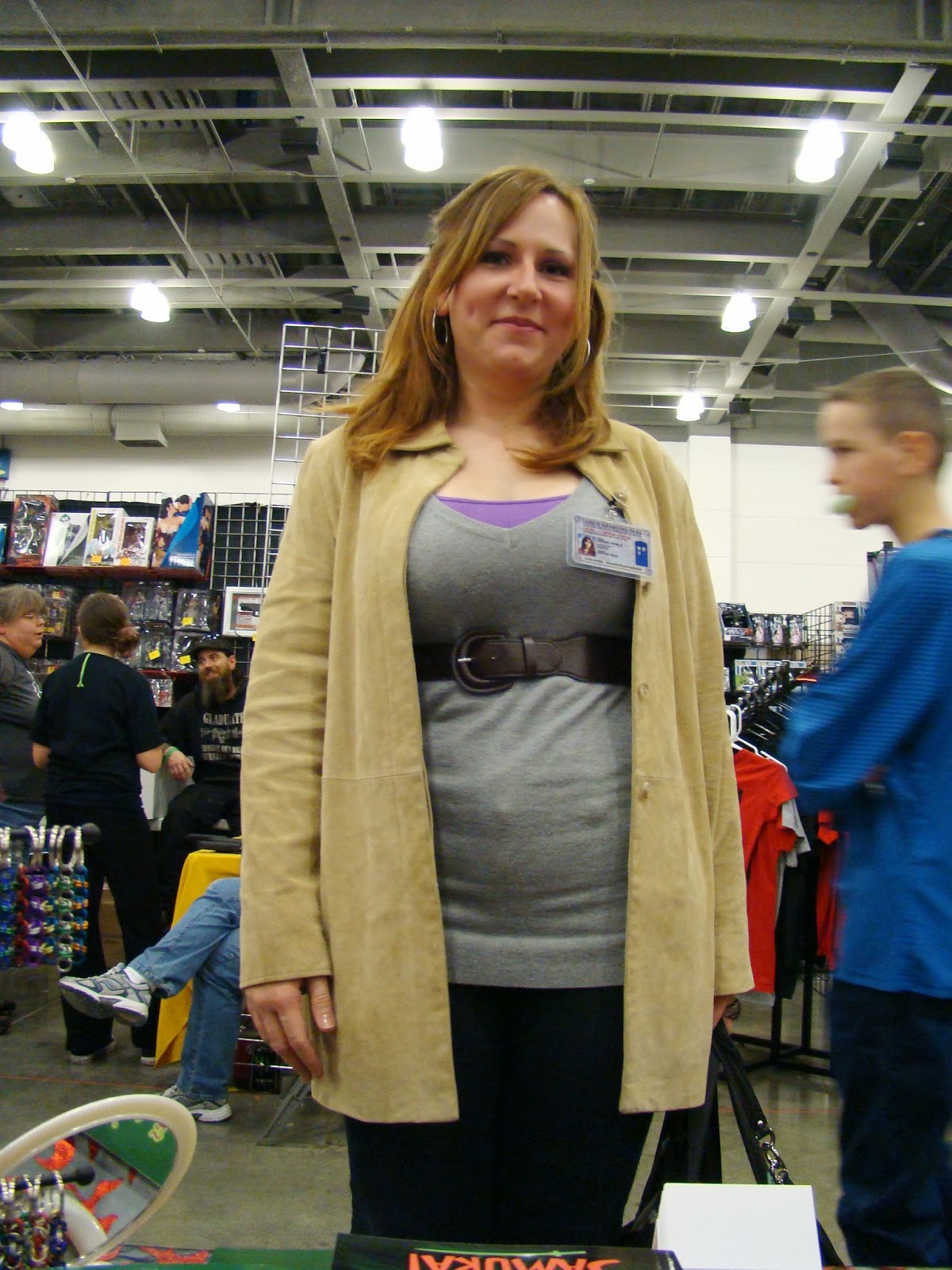 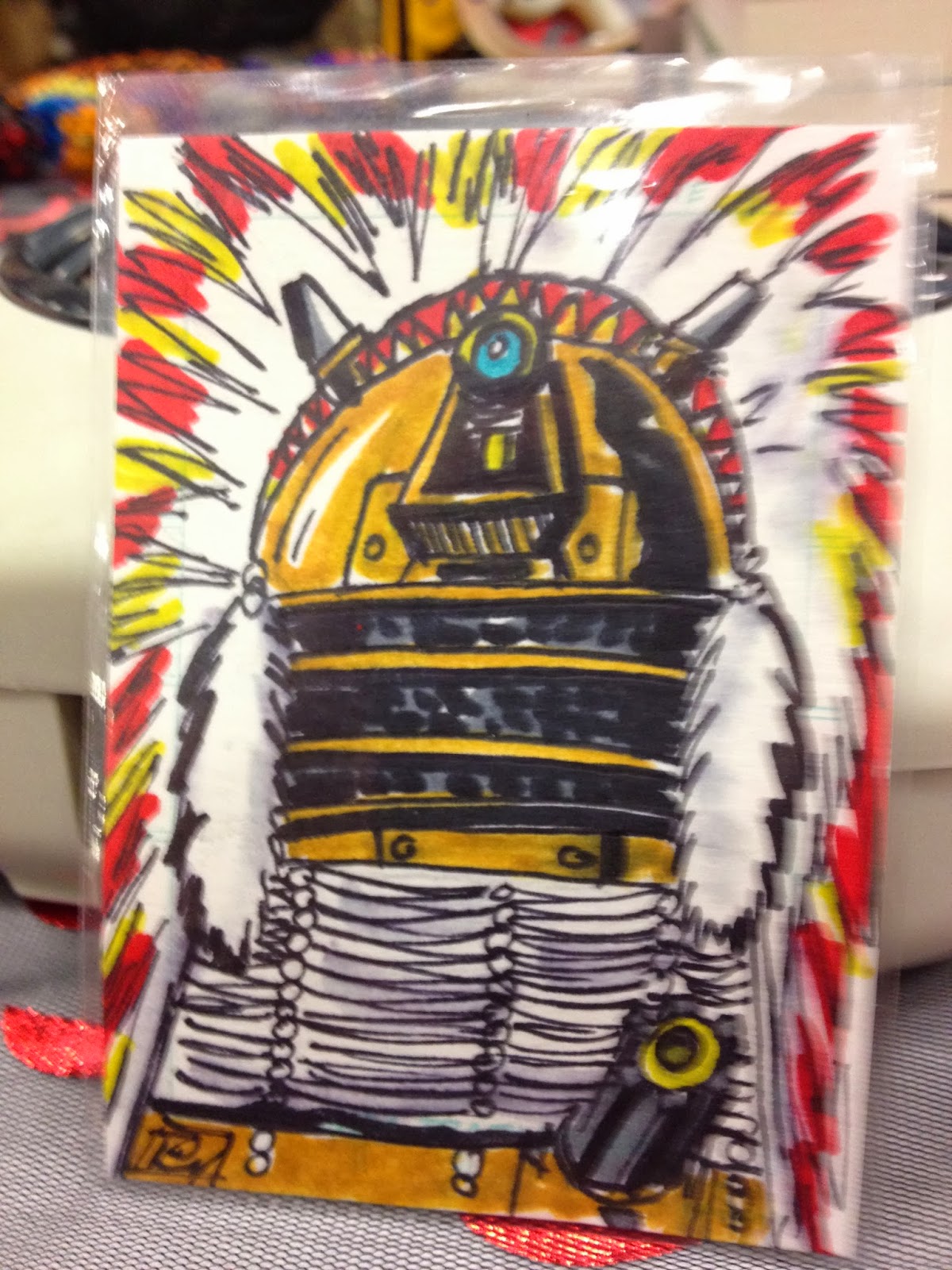 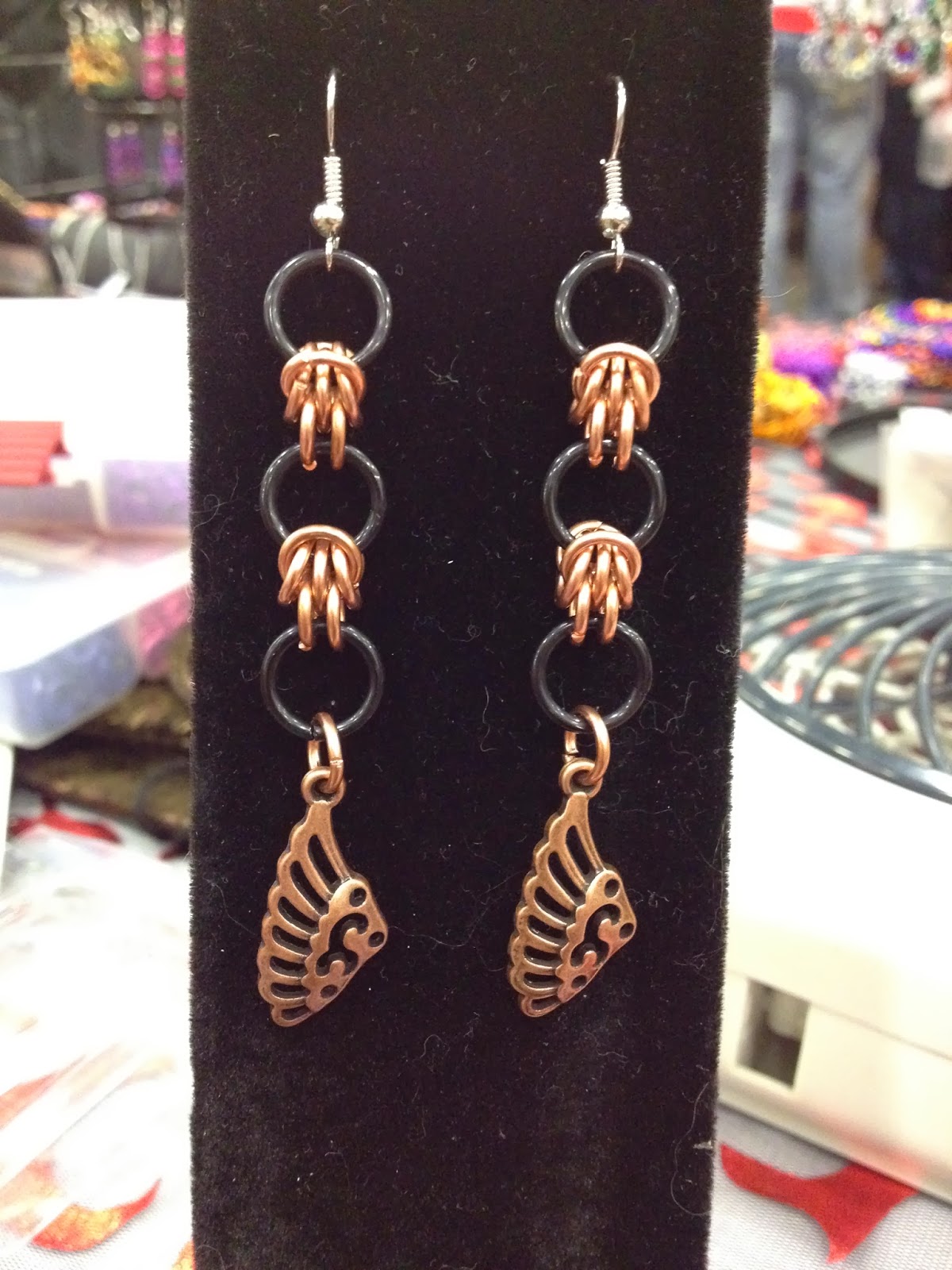 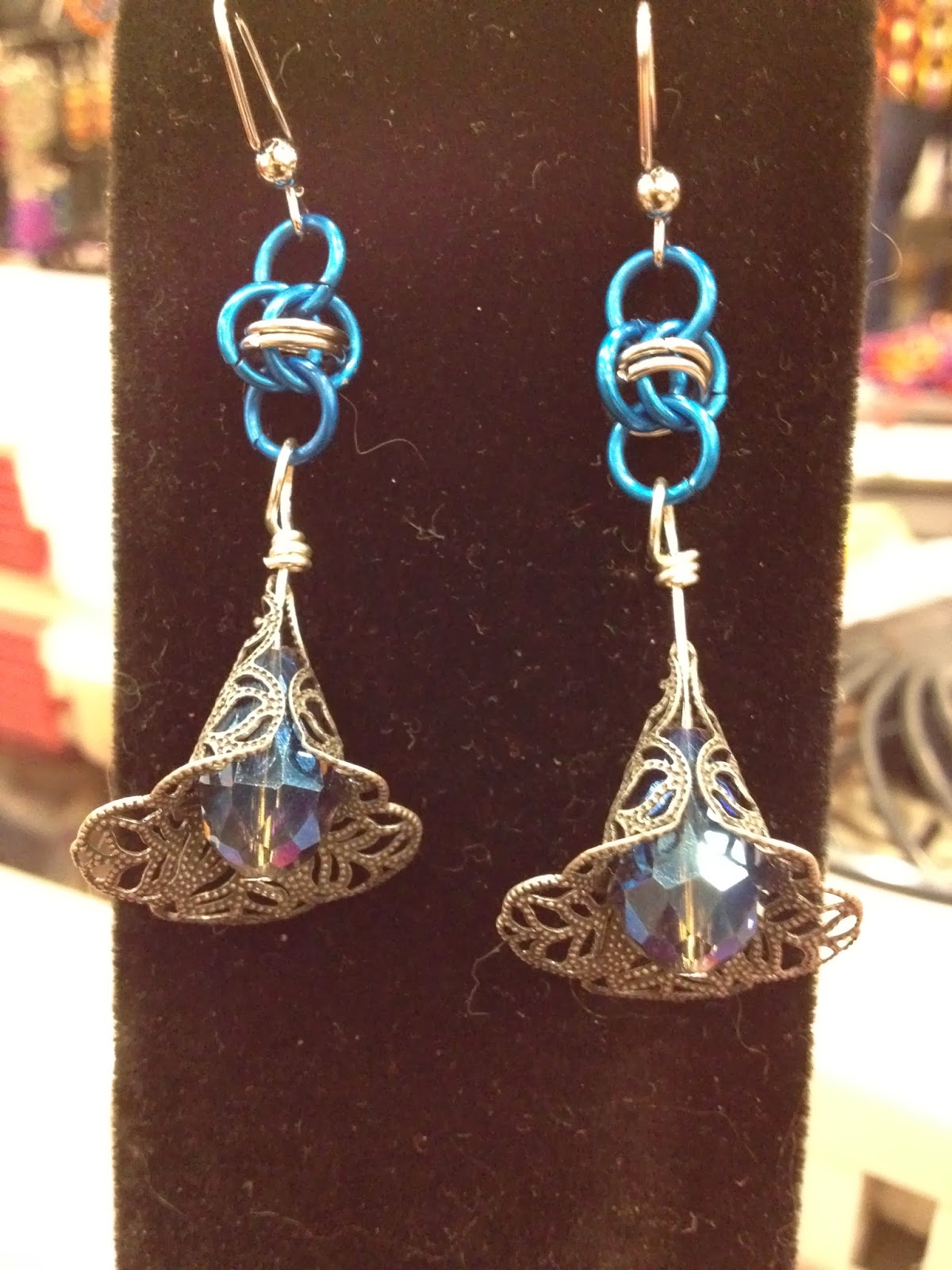 These I loved so much, I stole them for myself. Bwahahahaha! 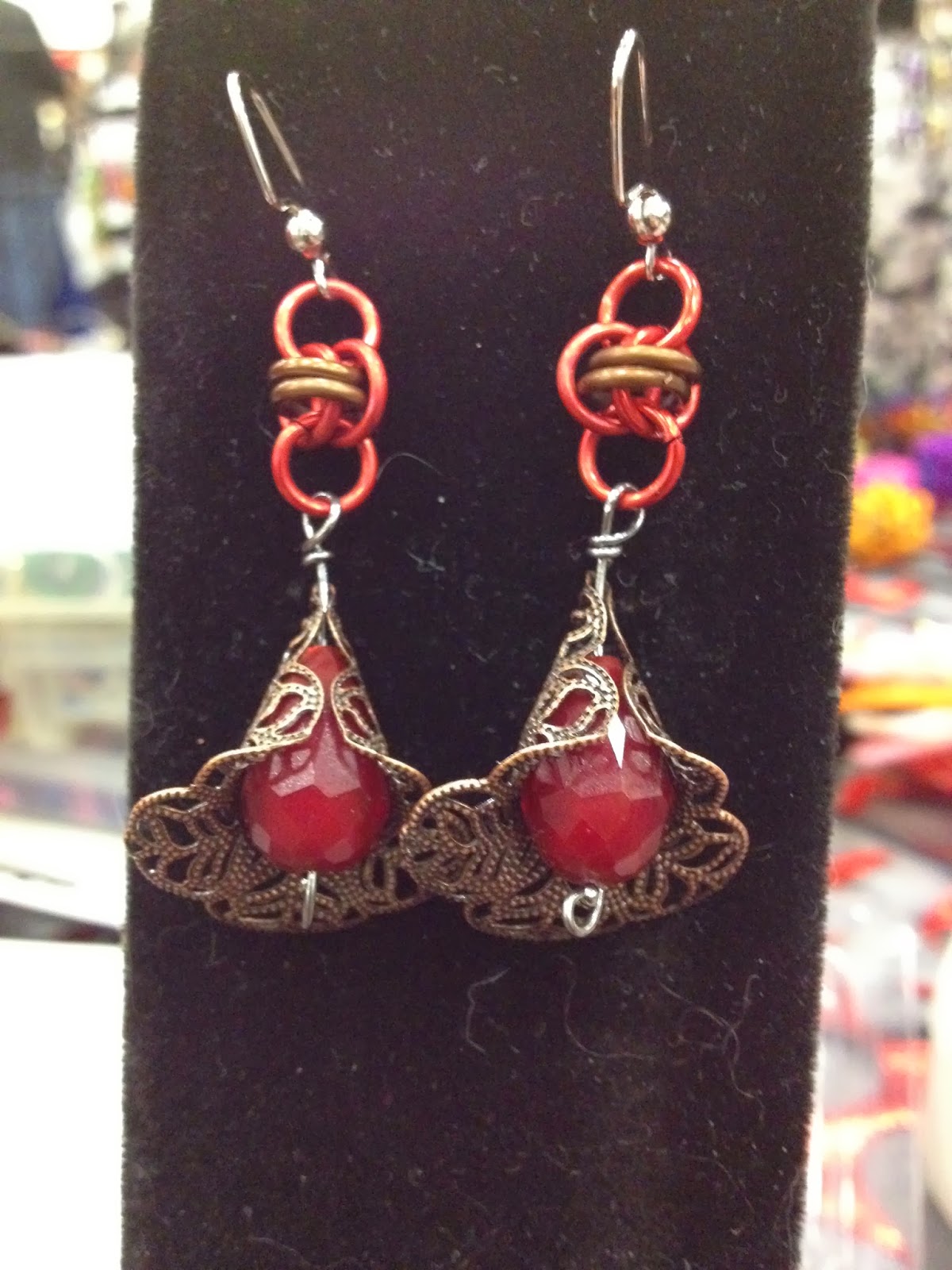 Here they are in bronze and red. 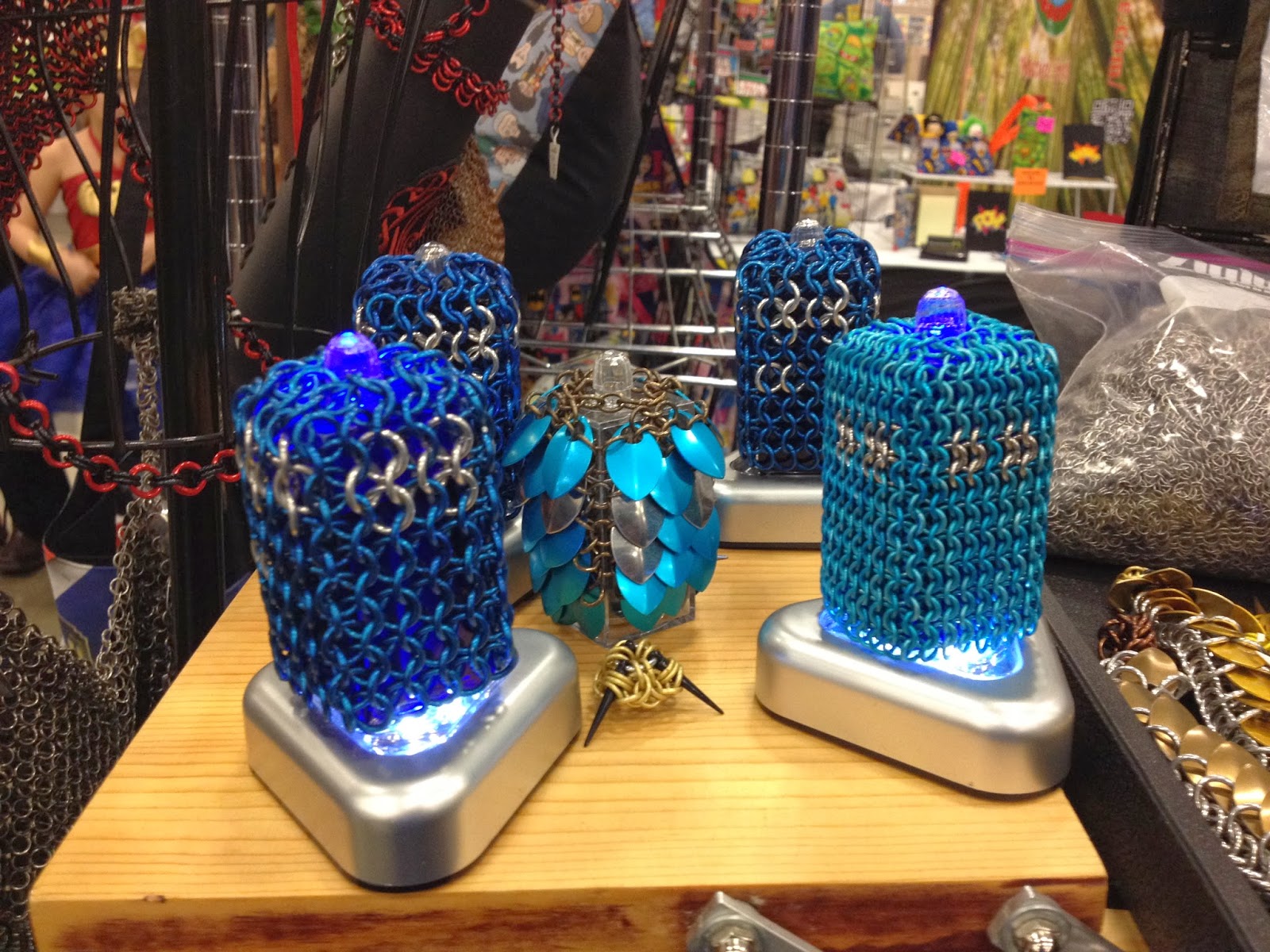 Another chainmailer definitely knew how to think outside the box. Aren't these adorable? Dr Who for the win! 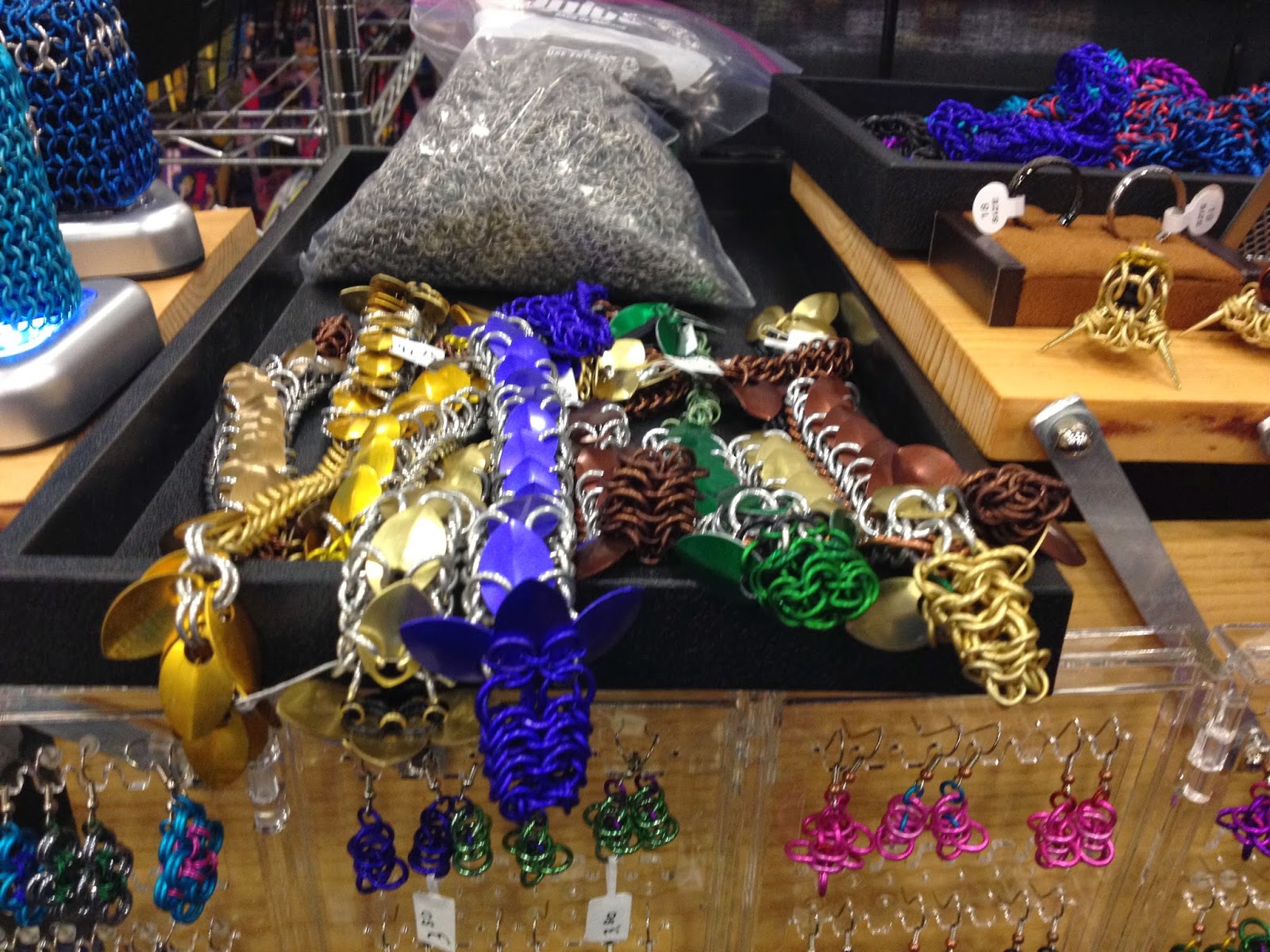 Chainmail dragons too! How cute! Hope you and yours have a lovely Valentine's Day!
Posted by Gloria Oliver at 5:00 AM 1 comment:

I just had surgery on my hand and am in some pain with it. Typing is sooooo difficult so I am sorry but this will be a very very short post:

Bad news:  I need to write the back cover blurb.

Does anyone else hate blurbing their own work as much as I do????
Posted by Ophelia Julien at 12:30 AM 1 comment: