Wrapping Up the Old Year, Planning for the New Year

The week in between Christmas and New Years is often a mixture of events, last minute things, and utter chaos.

It can also be a good time for introspection.

I've posted in the past that the day after New Years is usually my time to get my records in order for income tax time. It's also my time to update my webpage for what conventions and other appearances (young writers conferences, signings, and such) that I have scheduled so far in the next year, as well as think about what conventions I usually attend that maybe I should skip. 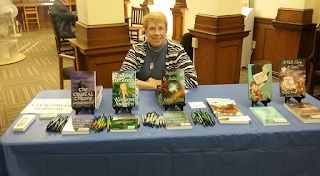 It's probably not news that conventions to small press authors are a means of promotion. (There are posts in this blog about it as well as book signings and other means.) Authors with traditional publishers have many ways of getting the word out about their books, established long ago by those publishing houses. Small presses have their own ways as well, and one of them is counting on their authors to promote themselves. Interviews in local newspapers, in blog posts, on podcasts are all good ways of getting the word about about yourself and your books. So are appearances at conventions. Participating on panels and having your book for sale at a dealer or an author table or a book signing is a plus on your promotion side. But when sales are down at a convention or the programming committee makes odd scheduling decisions, it's time to re-evaluate that convention.

And it's also time to consider which convention would work for a possible book launch party. Yes, the good news is that I've signed contracts with Zumaya Publications to re-release The Crystal Throne, Talking to Trees and a new expanded version of Agents & Adepts (now tentatively Agents, Adepts & Apprentices) with 22 stories (previously 16). Gloria Oliver and Christine Norris are also Zumaya authors so I know I'll be in good company. Expect to see blog posts about the new covers and publication release dates in 2017.

And now back to sorting receipts and rewatching the Sherlock trailer. And preparing for a young writers conference next week.