Back when I first learned to read, I noticed that men in the stories had a large variety of jobs, while women had a very limited choice - mother, nurse, teacher, airline stewardess, secretary. Even in science fiction it took awhile before I encountered stories with women who were pilots, doctors, professors, captains, owners of companies, soliders, admirals, or leaders of colonies. Once I did find an author who wrote about women working the same jobs as men (not in a spotlighted manner, but just as if it was perfectly normal in that society), I hunted for more of her or his work.

I've blogged before about gender roles, mainly in fantasy. But this is a topic that bears repeating.

In the real world, the glass ceiling hasn't been completely broken yet, but the cracks are still spreading. Gendered terms for occupations have slowly dropped out of usage - authoress, stewardess, hostess, actress (still in use but slowly fading). I don't automatically assume a doctor is male. I have worked with nursing students at a university long enough to know that not all nurses are female, either.

So where could someone come up with a list of occupations to use in a science fiction world? I start with what jobs exist in the present and spin off from there. The Occupational Outlook Handbook details numerous jobs in the U.S. Seventh Sanctum has a page of generators. The one under Classes/Professions allows you to choose a category (cyberpunk, fantasy, science fiction, or steampunk) and create a list of occupations for that universe.

Role models don't always have to be the main character. What about secondary or background characters? When I need a walkon character - someone to do something to help the main character (or villain) and not be seen again - someone identified by a occupation, I'll choose the occupation first, and then decide, does this character need to be a man or a woman? Does it matter? And if it doesn't matter to the story, why not a woman?

When you read, do you occasionally check to see how many male characters are mentioned versus how many female? Do you notice their occupations?

Writers of the Future!

This weekend is the 32nd Annual Writers of the Future Achievement Awards!

Both authors and artists are celebrated each year at the prestigious event. 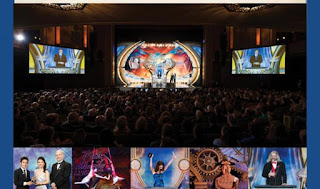 This year, you can even watch it live from their website at 6:30pm Pacific Standard Time on Sunday the 10th of April.

I love that you can dress formal or Steampunk formal! How cool is that?

But what is the contest about? Here's the first piece of the contest's history from their website:

Established and sponsored by L. Ron Hubbard in 1983, the “Writers Award Contest” was a budding competition aimed at discovering, and eventually publishing, deserving amateur and aspiring writers. The field of speculative fiction and fantasy, was chosen not only for Mr. Hubbard’s love of and success within the genre—but for the freedom of imagination and expression it provided as what he described as the “herald of possibility.”

Submissions to the contest are free and happen quarterly and even have cash prizes. The winners also get to see their stories/art published in a print and ebook anthology.

So if you're interested in writing and getting out there, this might be a venue to explore. :)

Have a great day!
Posted by Gloria Oliver at 8:22 AM No comments: