Give Yourself Permission to Fail

For many writers, rejections are a bit like a trips to the dentist. They’d do almost anything to avoid them rather than risk getting bad news.

You can understand someone being afraid of dentists (I know I am), but why fear rejection? What’s so terrible about someone passing up the chance to publish your work?

I think it’s partly because, no matter how much we like to pretend we don’t care, it hurts to have a story turned down. And so it should. If you don’t care if your story gets accepted, why submit it there in the first place? But I believe there’s more to it than worrying about the sting of being told ‘No thank you’ by someone you’ve probably never met.

A rejection, especially when we’re starting out, is a hammer blow to our self-confidence. The bad news for would-be writers is that you’re going to get rejected, probably quite a lot. If getting published is important to you, those rejections are going to hurt.

The good news is that it gets easier. The more knocks you take, the tougher you’ll get, and if you make the effort to improve your craft, if you’re willing to recognize your mistakes and learn from them there’s a good chance that you will get published.

So go on, give yourself permission to fail. Take a deep breath and pitch that story.

One day, your dream will thank you. 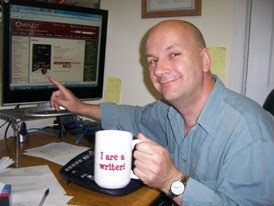 Born in England, Jon Gibbs, now lives in New Jersey, where he’s a member of several writers' groups, including SCBWI and The Garden State Horror Writers. He is the founder of The New Jersey Authors’ Network and FindAWritingGroup.com.

Jon's debut novel, Fur-Face (a Middle Grade fantasy about unusual friendships, unlikely alliances, and wanting to fit in), was published in eBook form by Echelon Press in 2010 (click here to see the trailer).

His presentation/workshop, The Fine Art of Self Promotion is based on entries from his popular online journal,
An Englishman in New Jersey.

Jon can usually be found hunched over the computer in his basement office. One day he hopes to figure out how to switch it on.

Email ThisBlogThis!Share to TwitterShare to FacebookShare to Pinterest
Labels: Give yourself permission to fail, Jon Gibbs